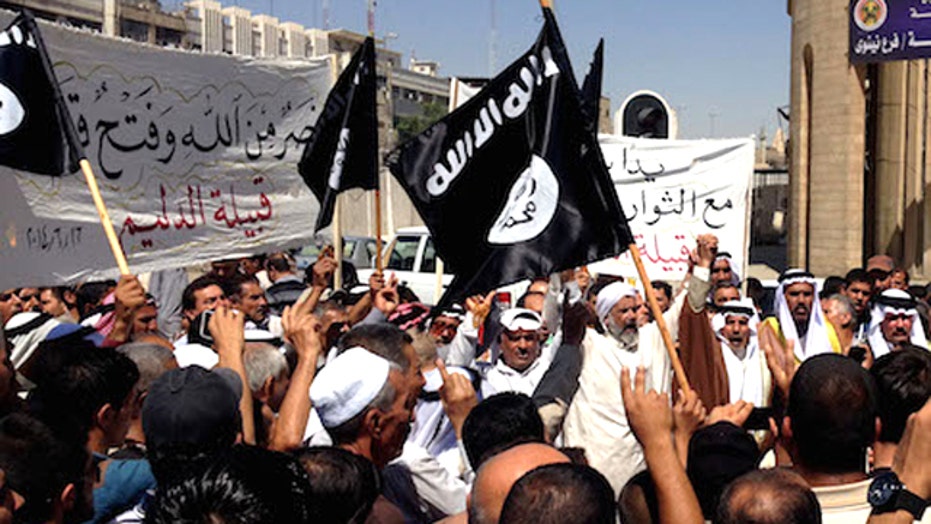 This is a rush transcript from "The Kelly File," August 22, 2014. This copy may not be in its final form and may be updated.

MARTHA MACCALLUM, GUEST HOST: Breaking tonight, is the momentum changing as the murder of a U.S. journalist may lead America into a larger war against the world's most brutal terror group? Welcome to "The Kelly File" tonight everybody. I'm Martha MacCallum in for Megyn Kelly.

So over the past 72 hours we have seen a serious shift in the tone of the Obama administration after the terror army known as ISIS beheads an American journalist in a gruesome video.

On Wednesday, James Foley was memorialized by President Obama, but the president's remarks seemed to suggest that the U.S. would simply stay the course to fight Foley's killers.

PRESIDENT BARACK OBAMA: Governments and peoples across the Middle East, there has to be a common effort to extract this cancer so that it does not spread. Friends and allies around the world, we share a common security and a common set of values that are rooted in the opposite of what we saw yesterday. And we will continue to confront this hateful terrorism and replace it with a sense of hope and civility.

MACCALLUM: Well, then yesterday just 24 hours after the president made those remarks we heard some of the most strong language that this administration has used on this issue. Secretary of Defense Chuck Hagel suggested that ISIS is unlike anything that we have ever seen.

CHUCK HAGEL, SECRETARY OF DEFENSE: ISIL is a sophisticated and well-funded as any group that we have seen. They're beyond just a terrorist group. They marry ideology, a sophistication of strategic and tactical military prowess. They are tremendously well funded. This is beyond anything that we've seen. So, we must prepare for everything.

MACCALLUM: We must prepare for everything. What does that mean from Chuck Hagel? The media instantly seized on those remarks. But it seems that the White House was listening as well. They began to scramble together a last-minute press briefing earlier today to admit that Jim Foley's death was not only an act of terror but that ISIS does present such a serious threat that we need to be, as Chuck Hagel said, ready for anything even a September 11th-style attack.

BEN RHODES, DEPUTY NATIONAL SECURITY ADVISER: When you see somebody killed in such a horrific way, that represents a terrorist attack.

UNIDENTIFIED WOMAN: Could they pull off a 9/11-size attack? Are they capable of that?

RHODES: Look, to-date we have not seen them focus on that type of planning. But that doesn't mean we're not going to be very mindful that they could quickly aim to pivot to attacks against western targets outside of the region. And so, again, this is something we're going to monitor very closely because we certainly take seriously the fact that this is an organization that has a cadre of fighters who were clearly willing to do horrific things as we saw on that video and as we seen as a massacre in civilians in Iraq. They have significant stream of funding that they've acquired over the last year or two. And, again, if they show the intent or they show plotting against the United States, we'll be prepared to deal with that if necessary.

MACCALLUM: Chris Stirewalt and Colonel Oliver North are here to tackle the political and military implications here tonight as the scene has changed dramatically in the last 24 to 48 hours. Let's get started with Chris Stirewalt tonight, our Fox News digital politics editor. Chris, you know, we have heard from Ben Rhodes, as you just saw, we have heard from Chuck Hagel on this. We have not so far heard from the president in these new starker terms. When do you expect we will?

CHRIS STIREWALT, FOX NEWS DIGITAL POLITICS EDITOR: Well, look, Colonel North may say something that I don't know because that's his area of expertise, but as far as I can tell nothing has changed here except for the politics. The situation on the ground seems materially the same. The political situation is getting worse for the administration as fissures erupt as you start to see a split between the Pentagon and the White House in terms of the military brass pushing and saying, look, Mr. President, we're all sorry when bad things happen to good people. But we have a real problem on the ground.

MACCALLUM: Yes. And we have heard that there was disgruntlement at the Pentagon. That they felt that they were given a mission but they were not given a strategy. I mean, basically the last thing that we've heard from the president on this is protect Erbil and protect the Yazidis. And then we were going to protect everybody on the mountain top and then we decided that the mountain top was OK. And then the next thing you know we have this horrific beheading of this journalist of James Foley.

And to watch his parents today talking about the experience that they have been going through and to listen to their son -- to them talk about their son, Chris, is just so incredibly heartbreaking. But, you know, you wonder why the White House appears to be once again about 24 to 48 hours behind everybody else on what's actually going on?

STIREWALT: I don't know that there has ever been an administration this reactive. They seem to live on about 48-hour news cycles gasping from one thing to the next. Can we get through this, oh, did the president play golf, oh, how did it look, oh, did he wear a tie. And they seem to be always careening from this problem to that problem and trying to answer the critics without looking like they're answering the critics. What ends up happening for this president most often and we saw it in Afghanistan, we saw it in Libya is he gets dragged into conflicts by political pressure, foreign and domestic as the military, as public sentiment as is in the case here and his European allies. Push, push, push. But if you get in that way, it's unlikely you're going to build the political will at home necessary to carry out whatever that mission is.

MACCALLUM: Yes. You have to have that political will yourself before you can sell it to the American people. And that is what we don't know at this point. Chris, thank you very much.

MACCALLUM: Joining me for more on this now, Lieutenant Colonel Oliver North, host of "War Stories" and author of "Counterfeit Lies." Colonel North, welcome, good to have you here tonight.

LT. COL. OLIVER NORTH, HOST, "WAR STORIES": Martha, I'm going to be less charitable than Chris. I think you've got an administration that is looking through bifurcated lens at what's going on. Our military objectives in Iraq are limited to protecting U.S. personnel installations and supporting humanitarian ops is what been also said this afternoon when he was giving that briefing. So the White House is not changed. What's happened is the Pentagon -- Secretary Hagel and General Dempsey had just come from a briefing, the likes of which the president gets every single day.

It's called a presidential daily brief, if he bothers to read it or take the brief. All this information has been there for months. It's exacerbated now by the terrible murder. And it's not an execution. It's a murder of Jim Foley. The bottom-line is they have not changed their mind at the White House one bit as to what's happening. Unfortunately they're totally out of touch with reality, Martha.

MACCALLUM: You know, you hear discussion about coalition building and talking to our partners. And there was so much criticism of the president for on the same day that this news broke about James Foley, to speak about it and then go straight to the golf course. And, you know, but you wonder, it's fine to play golf on your vacation, but when is the work actually happening? When are the phone calls being made to Angela Merkel, to the other people who need to be involved in this discussion, to our allies in the Middle East as well? I mean, this is by everyone's estimation except perhaps the White House, this is an emergency situation that needs to be attacked immediately, is it not?

NORTH: Absolutely. And that's exactly the briefing that General Dempsey and Secretary Hagel got just before they walked into that briefing. The ISIL terror army, that's what it is, more than 20,000 strong, is bigger, better funded, better armed and deadlier than any adversary we've faced literally since the last war called Vietnam. There are 3,000-plus ISIL terrorist who is carry U.S. and European passports. The Pentagon says, we may put more security personnel in. They're going to have to put more. Here's what they ought to be doing real quickly.

NORTH: Number one, order a carrier strike group to the Mediterranean and a marine expeditionary brigade to back them up in the Mediterranean. Number two, no safe havens. They have to attack ISIL's high-value targets, logistic sites and command control in communications nodes in Iraq and in Syria. Does anybody remember Anwar Awlaki, we took out an American citizen in Yemen, at the direction of this president with a hell fire missile, then we damn well ought to be able to find al Baghdadi and do the same thing to him.

NORTH: Provide the Peshmerga with the heavy weapons and ammo and mobility that they're not getting through Baghdad. I saw, again, today the National Security briefing they're talking about shipping more supplies to the Peshmerga through Baghdad. It doesn't get there. Put joint tactical air controllers and forward air controllers on the ground with the Peshmerga forces and start now at rebuilding the secular Sunni tribes in Anbar. The ones that were there with us during their wakening.

MACCALLUM: Colonel North, I mean, we heard a very different tune today from the Defense Secretary Hagel and also from Dempsey. So we'll see if the cart can, you know, pull the wagon so to speak in all of this. Colonel North, thank you very much. Good to have you here tonight.

NORTH: Before it gets here. Right.