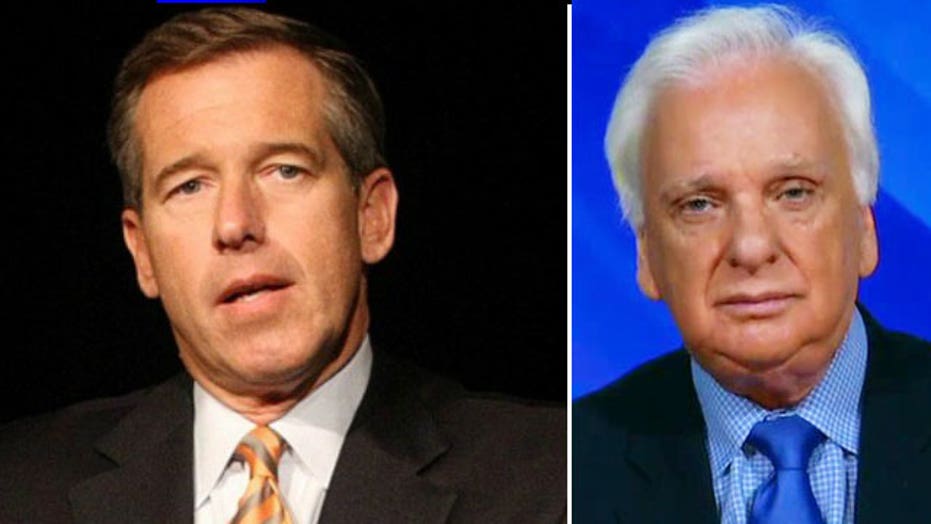 What will happen to Brian Williams?

O'REILLY: "Back of the Book" segment tonight, weekdays with Bernie. And here is the purveyor of BernardGoldberg.com joins us from North Carolina getting out of the Miami Heat, aren't you? Up there in North Carolina already.

BERNARD GOLDBERG, FOX NEWS CONTRIBUTOR: Yes. You should know, Bill, it could be Miami, the Sahara Desert I'm cool wherever I am. It doesn't matter.

O'REILLY: Okay. So Brian Williams, you are the president of NBC News now, he comes off suspension in a couple of weeks, a few weeks. What are you doing with him?

GOLDBERG: Well, I have nothing against Brian Williams personally. I want to make that clear. I don't like to see a person in the kind of humiliation that he must be in right now. That hurts. But if I conducted an internal investigation as NBC News has, and if, I don't know if this is the case. But if I turned up many examples of him making stuffs up, not just one or two but many. Then the situation becomes, it just untenable. There is nothing you can do about it. But the reason he is in the situation. I spoke to somebody who is very close to Brian Williams when he came over to NBC. Very close.

And he said Brian Williams wanted to be Walter Cronkite. That's great. Nothing wrong with that. He also wanted to be Jay Leno. You can't be both at the same time. They played by two different sets of rules. An entertainer can make stuff up, simply to be entertaining but a journalist can't. And that's why Brian Williams is in this situation. So I guess I would have to say, Brian, I'm going to try to find something else for you because the situation just can't go on like this.

O'REILLY: All right. So you try to find him another job, and make it $10 million.

GOLDBERG: We would work that out. I mean, you know, he's not going to make $10 million doing something else. What I'm saying is, by the way, by the way, Bill, I think the ratings would go up if they put him back in the anchor chair.

O'REILLY: Yes. They lost about it two million viewers since he has been out of there.

GOLDBERG: And I don't think just temporarily. I think Americans -- the American people love a second chance story. If he came on, not only with a sincere apology but with some kind of explanation for this kind of craziness. I think from a business point of view, he would do well. But you still can't do it. Because this will never go away.

O'REILLY: All right. So, here's what I would do, just -- I'd give him -- put him on the "Today" show. I mean, they're doing five hours. Those people are exhausted. I mean, you know, they collapse at the end of the day. You got so many, you got, Hoda, you got Kathie Lee, you got Lauer. I mean, I don't know who's on. Surely they could find, you know, stuff for him to do and it's got a good sense of humor as you pointed out. And that's what I would do.

O'REILLY: All right. I like Seinfeld. You know, I don't know him well. I've run into him a couple of times on Long Island. And we always go back and forth. But he seems to be a level headed guy. It's very pleased to see him attack political correctness and you say?

GOLDBERG: So, as I but I say, really, Jerry? Really? You just discovered that the politically correct culture to use your word is creepy? Welcome to our world. Conservatives have been called sexist and racist forever. Simply because liberals don't agree with us. And it isn't just the sanctimonious liberal twits on college campuses that Jerry was talking about. It's also the sanctimonious liberal twits in Hollywood who think conservatives are bigots. So here's what I would suggest. If, Jerry, if you're watching, here's what I would suggest. The next time you go on some radio or TV show to bemoan the politically correct creepy culture, why don't you say that liberals created that creepy culture that too many liberals have become awe her authoritarian and too many liberals forgotten how to be liberal. Let's say if your liberal friends love you after you say something like that.

O'REILLY: Yes. I don't think he's going to get political about it. He's getting more socialist college kids --

O'REILLY: I agree with you but he's calling college kids essentially morons which is true. I was a moron in college. I understand. I don't think they had college when you were at that age but --

GOLDBERG: Come on. That's not -- that is so wrong.

GOLDBERG: That is so wrong.

O'REILLY: I know. It is politically incorrect. Anyway, he's calling college kids morons. I don't think he's going to upped it the way you would like to see it upped but the campaign is getting through and we have ham, she's got a book on this. Powers has got a book on it. Everybody's saying the same thing that knows anything. It's the left who's driving it. Last word.

GOLDBERG: Yes. But what -- I've read a lot of stories about this. None of them are saying but liberals created this situation. They're just saying, Jerry Seinfeld is outraged over the politically correct culture. It's been going on forever and we conservatives know that. We're the ones who have been called -- Jerry just discovered it? This is like Captain Renault in "Casablanca." He shop at this gambling going on.

O'REILLY: It's all right. At least he's speaking out about it. Nobody else is doing it. Bernie Goldberg, everybody.