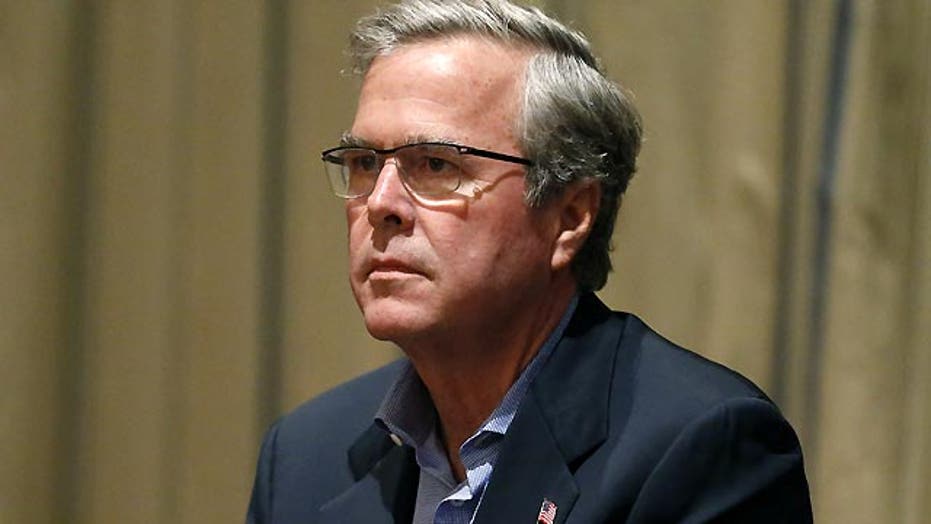 What the Iraq invasion answer reveals about Jeb Bush

This is a rush transcript from "Special Report," May 14, 2015. This copy may not be in its final form and may be updated.

Yes, I don't know what that decision would have been. That's a hypothetical, but the simple fact is mistakes were made.

Knowing what we know now, what would you have done? I would have not engaged. I would not have gone into Iraq.

So it has taken Jeb Bush four days, arguably six days since the interview with Megyn Kelly was actually taped on Saturday, to try to finally put this matter to rest. Charles, in those six days what have we learned about Jeb Bush as a presidential candidate?

CHARLES KRAUTHAMMER, SYNDICATED COLUMNIST: Well, he's not as nimble as some of the other candidates. Marco Rubio I thought had the closest to the right answer, still only close, when he said not only would I not have done it, George W. Bush wouldn't have done it.

But the real answer is that the question answers itself. Had we known there were no weapons of mass destruction the question would not have arisen. The basis for the war, the basis for going to the U.N. to ask for authorization, the basis for going to Congress was the fact that there were 12 U.N. resolutions pledging Iraq to give up its weapons of mass destruction as a condition for the ceasefire that ended the first Gulf War.

WALLACE: So then how do you explain --

KRAUTHAMMER: But if we had known there were no weapons of mass destruction the question would not have arisen.

WALLACE: So given that, why did it create such trouble for Jeb Bush?

KRAUTHAMMER: I think in the initial interview he either misheard or didn't want to answer the question. It's not the first time a politician answers the question he wants to answer and not the one that was opposed. He was answering the question, had you known what you knew at the time what would you have done?

KRAUTHAMMER: That's the answer he gave. If it's a way to dodge, that's OK. That's happened before. Why it took four days or six days to straighten it out, what do you think I am, a psychiatrist?

WALLACE: I was kind of hoping for that kind of analysis.

All right, look, Bush's ties to his brother and to his father, the so- called family thing, was always going to be both an advantage and a disadvantage for him. And Mara, I guess the question I have there is are you surprised that he was so unprepared, which seems on the face of it to have been a question if not in the first interview at some point he was going to be asked, and does this feed into the narrative that he has got a lot of baggage that is going to weigh him town in a potential race against Hillary Clinton?

MARA LIASSON, NATIONAL PUBLIC RADIO: Number one, I'm stunned, not just surprised, I was stunned, and so were a lot of Republicans.

WALLACE: That he wasn't better prepared?

LIASSON: Yes. This is the number one question. He got asked it a second time by Sean Hannity, a second time, he still couldn't answer it. "That's a hypothetical question. I don't know what I would have done." I mean, it's astounding to me.

Now, what it says is that this is going to be a bigger problem than I expected it to be. I thought that when he came out and said I love my brother, I love my father, but I'm my own man, he would start laying out areas where he might have differed with them. They've certainly made that easy for him to do. George W. has said I'm going to lay low, I'm a problem for him. He even said mistakes were made.

So I think the bottom line for me, the only explanation that I have heard that make any sense, is after 13 is years since he has run for election he is really rusty. He is just not as good a candidate as we thought he was going to be.

WALLACE: And how do you explain also the fact that he said supposedly in a private meeting with fundraisers which we know is going to get leaked this his top adviser on Israel was his brother?

LIASSON: Yes. Well, I think that was a candid, honest statement that he does look to his brother for advice. I think that feeds into your second question, which is it's going to be a problem for him.

KRAUTHAMMER: And on Israel I think it's a good choice.

JUDGE ANDREW NAPOLITANO, FOX NEWS SENIOR JUDICIAL ANALYST: Look, he was actually asked this a third time by a 19-year-old college student, and he ridiculed the college student's choice of words rather than answering this directly.

Chris, if the Republican base gets the impression in these primaries that Jeb Bush is going to answer questions or make decisions in order to make his brother look good rather than what he honestly thinks is a president should do, he's shot himself in both feet. I think this is almost irreparable damage to him.

WALLACE: That was kind of a Perry Mason moment. I'm very pleased with myself.

NAPOLITANO: Very good, Perry. He's viewed very differently today than he was seven days ago, and it's entirely his own doing.

WALLACE: It's interesting about Jeb Bush, and we're probably overreacting now. We always do. I thought he pulled a master stroke in December when he basically got into the race and kind of jumpstarted the race and started raising tens of millions of dollars.

But let's look again at the poll that came out yesterday, the FOX News poll of the Republican candidates, because what's striking there is he's tied for the lead, yes, with Ben Carson at 13 percent, but narrowly trailing are Walker and Huckabee and Rubio and Paul, all well within the margin of error. Judge, whatever advantage that he had last December and January and February as the front runner seems to be gone.

NAPOLITANO: Absolutely. And the Jeb Bush that we saw in me go Megyn's interview to me did not look presidential. You can say the same thing about his brother and Barack Obama 500 days before Election Day. But with all the preparation time, with all the people he has around him, with all the family history, he should have come across a lot more authoritative, creative, and well-grounded than he did.

WALLACE: Charles, are we being unfair?

KRAUTHAMMER: Slightly. I mean, I think the expectations are because he is the frontrunner, because he's raised an amount of money equal to the GDP of about eight countries that he ought to be fluent and in command, presidential. But he's a candidate, and he is rusty, hasn't been out there for eight years. You would expect him -- I mean, I don't have those same expectations.

The problem for him is if you're starting out as an unknown, you're starting out as a had Huckabee in '08 or a Cruz or someone in this cycle, at the beginning you're slightly off the radar. You're working in small places, nobody is paying attention as you work out the kinks here in double A ball, triple A ball, no one keeps score. With Bush everybody keeps score from day one. So getting into the -- you know, getting up to speed is something that he can't do in obscurity. So I think that may be why the mistakes were magnified.

But I wouldn't underestimate him. He's still I think in the top tier, and that's where he has been from the beginning. He hasn't broken away. That's I think the real news. Every candidate in this poll is under 15 percent, which tells you that the field hasn't sorted itself out even remotely now.

WALLACE: And briefly, we've got less than a minute left in this segment, Mara, if you're going to make a mistake, even if Jeb Bush can never be under the radar, better to make this mistake 500 days out rather than a week before the Iowa caucus.

LIASSON: Absolutely. That's the best news for him all week. This race clearly doesn't have a front runner but the only difference I'd say to Charles is nobody does anything under the radar anymore. There is no more under the radar in the era of you tube, everything is public, noticed, and can never be erased.

KRAUTHAMMER: Ben Carson made a lot of big errors that were not ignored but they did not get --

LIASSON: Because he is not taken as seriously as Jeb Bush.

KRAUTHAMMER: That's my point. Jeb will never be ignored. If you're a Carson or somebody starting out, you get a pass and you get less intention at the beginning.