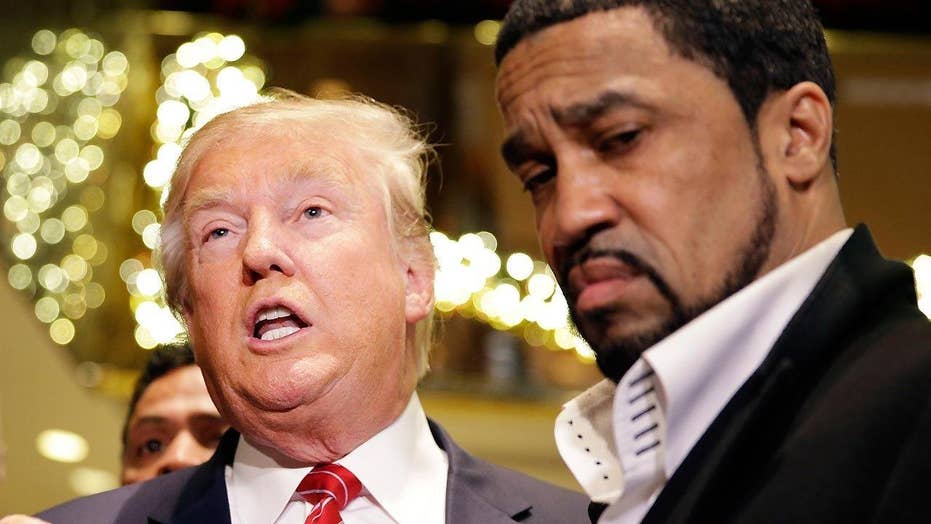 What must Trump do to convince skeptical minorities?

GOP presidential nominee has had two roundtable discussions with minority leaders and had made the plight of African-Americans a recent focus. RNC Hispanic communications director Helen Aguirre Ferre goes 'On the Record'

This is a rush transcript from "On the Record," August 25, 2016. This copy may not be in its final form and may be updated.

DONALD TRUMP, GOP PRESIDENTIAL CANDIDATE: This is the year that the people who have been betrayed by Democratic policies, including millions and millions Of African-American and Hispanic-American citizens reject the politicians who have failed them over and over and over again.

GUILFOYLE: And today, Trump held a round table with minority leaders.

RNC director of Hispanic Communications Helen Aguirre Ferre was in that meeting.

Helen goes ON THE RECORD from Washington, D.C.

Helen, thanks for being with us tonight.

What was your take away from all this message today, point, counter-point, what's the effect and will it impact in a positive way the Hispanic and Latino voters?

HELEN AGUIRRE FERRE, RNC DIRECTOR, HISPANIC COMMUNICATIONS: I think it's going to be very positive for the Hispanic and Latino voters. Mr. Trump had a great meeting today where he talked with Hispanic and African- American leaders and as he did last Saturday.

And he is talking about issues that are very meaningful. It's not just immigration reform, but it's also about jobs, the economy. Making the streets and communities safe.

Religious liberty, which is really important. We don't leave our faith in the pews of the church. We take it home and live it every single day.

School choice. Why should you be locked into a school, a failing school because of the zip code that you happen to live in?

These are the issues that really matter to Latino voters, African-American voters. He is addressing them face forward. And that makes a major difference.

Democrats, you know, I'm appalled. I was watching your previous segment. And I'm appalled at Hillary Clinton trying to talk to us about values?

Hillary Clinton, who is clearly corrupt with her foundation and used pay- to-play with the State Department, our national security at risk? She can't be honest with the families of Benghazi victims, American patriots.

Who is she to lecture 14 million voters who supported Mr. Trump for the primary and the many more who are going to be voting in November? Who is she to tell us what is legitimate?

She hasn't even had a press conference in 264 days. I wonder what she is afraid of.

But how is he going to get the Latinos that are opposed to the wall, when he says, hey, we are going to have a wall. Mexico is going to pay for it.

Any suggestions or commentary about that today?

FERRE: Well, I can tell that we talked a little bit about immigration. But one of the things for sure that our polls show us is that 20 percent of Latino voters are persuadable.

They are looking for a better option than Hillary Clinton. They are tired of being pandered to.

So when you talk about, look, we want law and order. Mexico has very strict immigration rules, too. And it's a felony to be an undocumented person in Mexico. So why wouldn't the United States or any other country want to take care of immigration as a part of national security, as well as economic security?

We used to be a country that actually put the rule of law above everything else. And now we don't? That's not right.

GUILFOYLE: Yes, I know. As a former prosecutor, I worked in two different offices, and they both handled it a little bit differently with the San Francisco D.A.'s office and the Los Angeles District Attorney's office. There needs to be some uniformity.

And we certainly thank you for your time tonight, Helen. And we will see where this goes going forward.