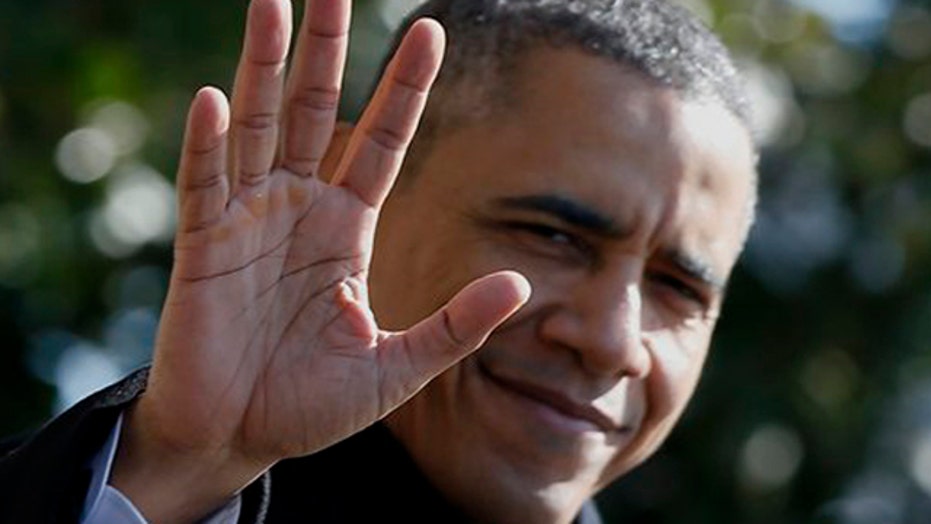 What is President Obama doing that Bush didn't?

This is a rush transcript from "The Kelly File," February 14, 2014. This copy may not be in its final form and may be updated.

THEN-SENATOR BARACK OBAMA, 2008: I take the constitution very seriously. The biggest problem that we're facing right now had to do with George Bush trying to bring more and more power into the executive branch and not go through Congress at all. And that is what I intend to reverse when I'm president of the United States of America.

OBAMA, 2007: One of the first thing I'm going to do is call my attorney general and say to him or her, I want you to review every executive order that issued by George Bush, whether it relates to wireless taps or detaining people or reading e-mails, or whatever it is. I want you to go through every single one of them and if they're unconstitutional, if they're encroaching on civil liberties unnecessarily we are going to overturn them.

MEGYN KELLY, HOST: Well that was then-Senator Obama the campaign trail back when he was running for president in his first term. Hard to believe that sme man would one day tell the American public he's got a pen and a phone and intends to use them, to press his agenda with or without Congress.

KELLY: General great to see you. It was your administration who he wanted his attorney general to review, because they wanted to rein in these executive powers grabs. Let me ask you your reaction to that Barack Obama versus today's Barack Obama?

JUDGE MICHAEL MUKASEY, FORMER US ATTORNEY GENERAL: I didn't believe that Barack Obama when he said it then and I obviously don't believe it now.

KELLY: Why not? Why didn't you believe it then?

MUKASEY: Because it was quite obvious he wanted to do things that would never get past Congress. And from day -- wasn't day one, it was actually day two when he started signing orders closing Gitmo, eliminating the CIA interrogation program, that it was obvious he was going to do this (ph). And he proceeded along that road.

KELLY: Well that query whether that's the case with the ObamaCare because it seems like every week we get another executive action on this law which was a hard-fought battle, which was extremely contentious. And you know, Karl Rove had a piece this week in the wall street journal saying what is happening now with this changes with the ObamaCare -- particularly the delay of the employer mandate. Because just so the viewers know that just going to kick in and there was a lot of prediction that employers are going to start laying off people come fall right before the midterms and now suddenly that's been delayed by another year and he maintain this is done for political reasons and that's a fact in Karl's view. Did President Bush make executive orders or executive actions for political reasons?

MUKASEY: Not my experience. The only executive orders that I ever knew of, that he was criticized for, were the ones following on 9/11, where he was acting based on what he regarded as his constitutional authority and responsibility.

KELLY: The CIA and the interrogations and -

MUKASEY: The eavesdropping, other programs that he believed he had the power to implement. And that by the time they were -- later, the subject of newspaper articles in fact it come under the control of Congress and under the control of the courts. But that was the only criticism. He never tried to disregard a statute, apply only the parts he wanted and not the parts that he didn't.

KELLY: If that was true, I mean if the President really did delay this employer mandate for millions and millions of businesses, for political reasons to save the Democrats come 2014. What does that say, I guess were so cynical in the press maybe viewers are by now, they were saying yeah well, that's how it works. Is that not how it works?

KELLY: I don't know, I mean did you actually witness this with President Bush? Were there things he could have taken advantage of but didn't? I'm just trying to buy it, you know what I mean? It just seems like anybody with that much power would say, yes I want more power, yes I will do what needs to be done to have more power. And if I have a Congress who won't work with me, a-do nothing Congress that has a nine percent approval rating, lower literally than a cockroaches approval rating, I'm going to take my pen and get it done.

MUKASEY: I can't think off hand that a situation in which it was even considered, that something that a law forbad we would do anyway simply because he would get away with it, or where we would take part of a statute and apply it but not the rest because the rest was inconvenient.

KELLY: What do you make of this push by these Republican Congressmen to get Eric Holder to send them the legal justification for these executive actions?

MUKASEY: Good luck with that. I mean I'd be interested to see what the legal justification is. But the fact is that it's not his justification, but the President's actions that really need to be examined.

KELLY: And your thoughts -- I mean is this just a white house thing or does it go beyond the white house?

MUKASEY: Oh it's principally a White House thing but it goes beyond the white house in the sense that, for example in the executive agencies, the environmental protection agency, is implementing regulations that any new coal-fired plant has to have a scrubber. That even the one plant that's got it, the person runs that one plant that says economically unfeasible, doesn't work and it can't be installed

KELLY: So it hobbles then.

MUKASEY: It hobbles them, essentially rules out any new coal-fired plants without getting legislation through Congress doing it but instead putting in place an EPA regulation that cant be complied with.

KELLY: So it's not just the President, it's the administrative agency that's also part of the executive branch. I got to go, General Mukasey great to see you.

MUKASEY: Great to see you

KELLY: All the best to you sir.