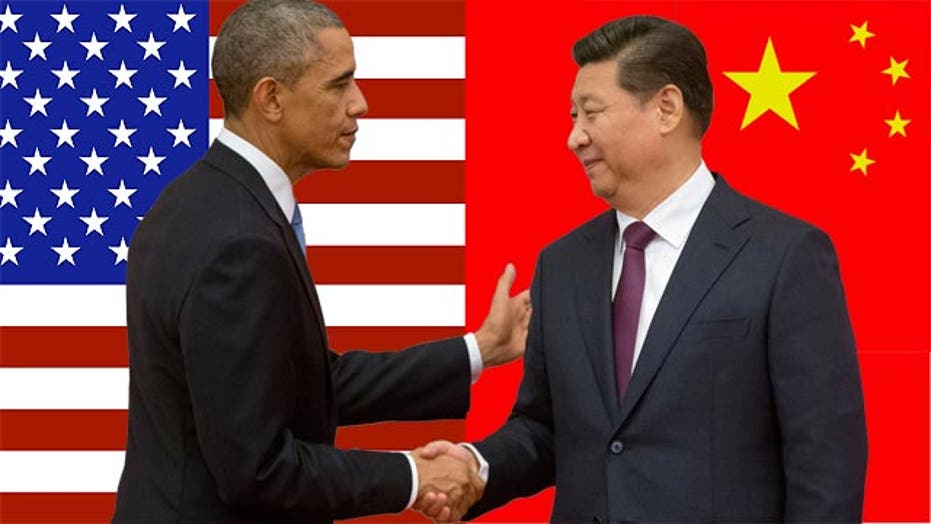 What hack attack reveals about US relations with China

This is a rush transcript from "Special Report," June 23, 2015. This copy may not be in its final form and may be updated.

KATHERINE ARCHULETA, OFFICE OF PERSONNEL MANAGEMENT DIRECTOR: We have estimated that to be a little over 4 million as I've described.

SEN. JERRY MORAN, R-KAN.: What's the total number of files that potentially could be breached?

JOSH EARNEST, WHITE HOUSE PRESS SECRETARY: I haven't heard any firm conclusions from the FBI about who suspects are or who subjects aren't. So I'd refer you to the FBI for a conclusion to that.

SEN. SUSAN COLLINS, R-MAINE: China obviously would have to be on the list, as would the Russians and the Iranians, because this was a sophisticated breach. It went on for a great many months.

BRET BAIER, ANCHOR: Well, China is the prime suspect, according to sources telling FOX News that 18 million current former prospective government employees personnel data, but as many as 30 million now. These numbers are staggering, but it's also affecting people directly including at the White House.

PETER ALEXANDER, NBC NEWS: Were you among those individuals who was notified your data may have been compromised as part of either of the breaches?

ALEXANDER: Can you give as you sense of how many people in this office were on that same -- this executive office right now working for the president of the United States?

EARNEST: I don't know how many people at the White House were affected.

STEVE HAYES, THE WEEKLY STANDARD: Well, I think you've got it exactly right. It is huge. It's really hard to overstate the impact of this. I mean, if you look at the kinds of things that our adversaries have done over the past several decades to get their hands on precisely this kind of information, the most sensitive information held by the most powerful people in some cases in the United States that could compromise U.S. national security in ways that we don't know. You had adversaries running intelligence operations literally for years in order to get small pieces of that. And now they've got it all. We believe it's China. Certainly the folks I've talked to in the intelligence community believe it's China.

You have to wonder when you listen to Josh Earnest, when you listen to Admiral Kirby at the State Department say -- refuse to say that it's China behind the attacks because they don't have a firm conclusion yet from the FBI when you have government officials talking pretty openly on backgrounds saying yes, of course it was China, you have to wonder how seriously China then takes comments like the one from Secretary of State John Kerry today when he said we're going to have a very frank discussion. What good is our frank, private admonitions if we're not even willing to name them as the perpetrator in public?

BAIER: And A.B., this hearing up on Capitol Hill today was really something, to hear senators say they have no confidence that this can't happen again because of what they're hearing in these hearings. Take a listen to this exchange with Senator Moran.

MORAN: No one is personally responsible?

ARCHULETA: I don't believe anyone is personally responsible. I believe that we're working as hard as we can to protect the data of our employees because that's the most important thing that we can do. And I take it very seriously. I'm angry as you are that this has happened to OPM. And I'm doing everything I can to move as quickly as I can to protect the systems.

BAIER: So nobody's personally responsible. They're trying to get to the bottom of it.

A.B. STODDARD, THE HILL: As sophisticated as this attack is, the response and the reaction is the exact opposite from us. So the Chinese, whoever is culpable, is watching us say we don't know how many. We don't know who it was. They dug around for a year. We're not blaming anyone. There's no accountability. We're just sort of mad at the hackers themselves.

And without any retaliation and any kind of response, we risk I know a further reaching, more sophisticated attack. It's clear. And to say, the vice president and the secretary of state say we want an honest and direct discussion -- there's no leverage if we don't out the Chinese. If we say, we don't really know who did it, and it's just really frustrating. We don't even really yet know how far-reaching it was in our own country. They can continue to say, oh, you guys are overreacting. This is a non- state actor. We can't control every hacker in Asia. Sorry.

BAIER: I mean, Charles, listening to those sound bites in James Rosen's piece from the vice president, secretary of state, secretary of the treasury, I mean, they were not pointed -- that pointed against the Chinese in any way, shape, or form.

CHARLES KRAUTHAMMER, SYNDICATED COLUMNIST: I think what's astonishing is not just the incompetence that you heard from the witnesses today's in Congress, but the passivity of the flaccidity of this administration in response. There is no response. The idea that we're going to have a frank discussion is almost amusing.

The vice president said responsible countries adhere to international law. This is in a meeting with the Chinese. The Chinese are laughing at him. The Chinese have as much respect for international law as the communists and the Nazis, the fascists, did in the last century. For them international law is a creation of the western colonial powers to which they adhere when it is convenient. It's like Obama saying to Putin people don't invade other countries in this century. Well, the Russians just did.

Biden said as well in this meeting with the Chinese this relationship is just too important. Well, you've just given away the game. The Chinese response is to say, the premier has said decision-makers in both countries must always remember that confrontation is a negative sum game. In other words, you challenge us, you make us responsible, we're going to challenge you and we're going to hit you back. Who's the dominant superpower here and who is the supplicant? The weakness of this response is simply astonishing.

BAIER: The Chinese vice premiere goes on to say both sides will pay heavy prices and the world will suffer, too. So of the things that were said, that seemed the most threatening today.

HAYES: Clearly. China is on the aggressive on the cyber, they are on the aggressive in the public rhetoric. And what I find equally astonishing, jaw-dropping, even, was the administration's own explanation as to why they're not outing the Chinese. You heard from Josh Earnest the FBI hasn't confirmed this. But of course we know if the FBI had confirmed this he probably would say we couldn't name them because it was part of a FBI investigation.

But what they said last week, what they were telling reporters last week was they couldn't confront the Chinese because they need the Chinese for the Iran deal. That's amazing that you would say that in public. It's like they don't even understand the implications of the words that come out of their mouths or the fact that their explanations for bad policy are worse in some cases than the bad policy itself.

BAIER: All right, but on the flipside there are people on Capitol Hill that say hey, listen, why do you want to confront the Chinese, to go up against them and to cause some international incident? But at some point you have to do something.

STODDARD: Well, it's different. I think there should have been a firmer response to the OPM hack. In terms of what's going on in the South China Sea, we are joining with the Philippines in some kind of response that involves military exercises in that region. That is really a rapidly escalating situation. And that's something where maybe they can be honest and direct. But in terms of the cyber-attack, if they don't admit that the Chinese are responsible, then they probably lost this round.

KRAUTHAMMER: Forget about admitting in public. What we ought to be doing is we ought to find one node in China, whether government, administrative, or whatever, to attack it, invade it, pillage it, and probably destroy it and lay waste to it, and say very quietly, nothing in public, you hit us, we're going to hit you back. This is how we kept the peace and kept deterrence with the Russians.

BAIER: We should be fair. We don't know that's not happening.

KRAUTHAMMER: OK. Assuming the Chinese have done it, all right? And you don't have to go to a court of law to get this. We either know or we don't.

BAIER: No, no, no. I'm saying to be fair we don't know that the U.S. is not doing that right now.

KRAUTHAMMER: I think we might have heard something about it. But if that is our policy then I applaud the administration. The probability of that being our policy is near zero.