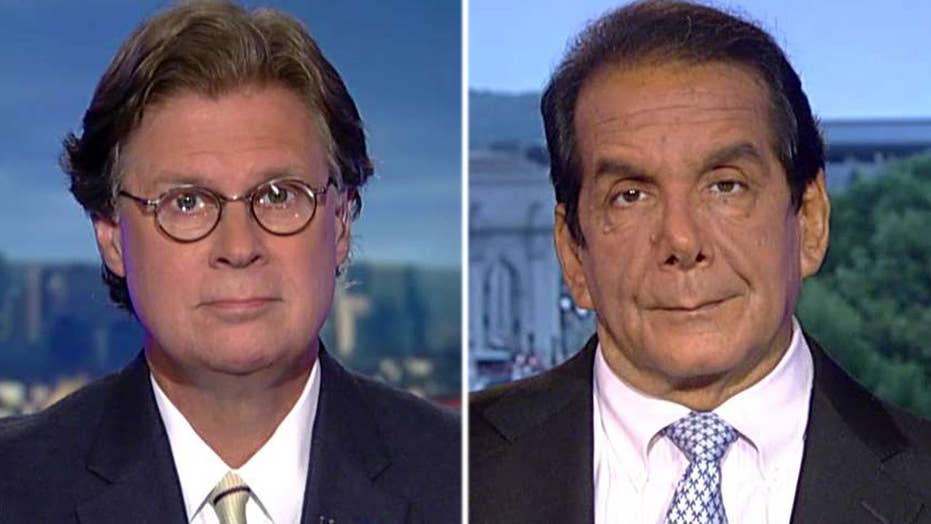 What does Spicer's resignation mean for the White House?

This is a rush transcript from "Special Report with Bret Baier," July 21, 2017. This copy may not be in its final form and may be updated.

SEAN SPICER, FORMER WHITE HOUSE PRESS SECRETARY: The president obviously wanted to add to the team more than anything. I just think it was in the best interests of our communications department, of our press organization to not have too many cooks in the kitchen.

JAMES ROSEN, FOX NEWS: There is definitely an arbitrage spread in how much the White House staff loves the president and the Washington press corps loves the president. That first comment from Sean Spicer is part of a longer interview, an exclusive interview he did with our own Sean Hannity that will air at 10 p.m. Eastern tonight on "Hannity."

CHARLES KRAUTHAMMER, SYNDICATED COLUMNIST: Well, Sean Spicer, we hardly knew ye. I feel sorry for Sean Spicer. I think his problem was he was just way over his head. This was a guy who was not prepared and for a particularly difficult president. If he had Thomas Jefferson as his president, he would have had a hard time, but with somebody as mercurial and changeable as President Trump I think he had no chance at all.

It began really badly with the first event, which was trying to pretend that the crowds at the inauguration, which is a trivial issue, were the largest ever in history, which they weren't, and he did it angrily. And then it got worse when he actually referred to concentration camps as holocaust centers. This is a man who should not have been in that position. And I think he's sort of liberated now. It's good for him to be somewhere else.

ROSEN: Anna, it's commonly reported that Reince Priebus was responsible for bringing in Sean Spicer who worked together at the RNC, into this role. Does this fall of Sean Spicer redound to the political demerits of Reince Priebus in the president's eyes?

ANNA PALMER, POLITICO: I think every week Reince Priebus gets the short end of the stick. Whenever there's someone to blame or Trump looking for someone to blame, we're always in the press corps saying Reince's last week? I do think this is a problem for him. The two were very close. And the open question is, does Reince Priebus remain in that role of chief of staff for the month or does he choose to step down more quickly?

ROSEN: All right, so now to the new communications director, Anthony Scaramucci, who had a pretty successful debut in the press briefing room today. He is what he said about his relationship with the White House chief of staff Reince Priebus.

ANTHONY SCARAMUCCI, WHITE HOUSE DIRECTOR OF COMMUNICATIONS: We are a little bit like brothers, where we rough each other up once in a while, which is totally normal for brothers. There's a lot of people in here who have brothers so you get that. But he's a dear friend. He brought me into the political system.

ROSEN: I had a brother. I have a brother and I have two sons, so I totally get what you he's talking about. Here is what Reince Priebus had to say about the same relationship with Anthony Scaramucci as part of that exclusive HANNITY interview that will be airing later tonight.

REINCE PRIEBUS, WHITE HOUSE CHIEF OF STAFF: When I first came into the RNC, Anthony was one of our regional finance chairmen. Obviously we've done a lot of things together. He was Scott Walker's finance chairman in Wisconsin. You may have seen the clip, I even almost worked for Anthony after the --

ROSEN: And this raises the question of exactly who does work for whom. Typically the White House chief of staff is the chief of the staff, but that seemed less than clear when Mr. Scaramucci was asked about that today.

SCARAMUCCI: I'm going to let Reince answer that. I have no problem working for Reince. I can only speaking about my management style. The president said I report to him directly.

ROSEN: What you make of that, Byron York?

BYRON YORK, WASHINGTON EXAMINER: Clearly they love each other like brothers. That's just great, and donors, too. He made it clear that he thought he would be reporting to the president directly.

This actually was a pretty good day for the White House. If you remember, it started out with us talking about Trump firing prosecutor Mueller --

ROSEN: Anna, should we imagine the set of attributes that Scaramucci has brought to this job, he has run a very successful hedge fund, he is no stranger to politics. He's donated heavily to both parties. He was involved in the Trump campaign. Should we imagine that he will have greater success than Sean Spicer did?

PALMER: I don't know. I think the one question is really out there is Anthony Scaramucci has never set strategic messaging for a corporation, for a Congressional office, for the White House, and that is a big job. And the other question is does Sean Spicer's press team, does the communications department, do they see it's an opportunity where they say you know what, I don't want to be working here anymore, or does Anthony Scaramucci bring in his own people? So that's going to be I think the two things that I'm definitely watching for.

ROSEN: And he did mention that Dan Scavino and Hope Hicks will remain staff. Byron?

YORK: We should also mention that he announced that Sarah Huckabee Sanders would be the press secretary. So she'll be the one if they do televised briefings, she will be the one who will actually be the face of it. So it depends -- it's unclear whether that's going to be actually much better. But there is the kind of work that the White House is not doing very much. If the president is going to announce X on Wednesday, all of a sudden on Tuesday we see lots of stories in the press about what the president is going to do. Well, that doesn't happen by accident. There is a communications director planning this kind of stuff. And that's what we don't know if Scaramucci is going to be able to do. But they haven't done that much anyway, but anything would be an improvement.

KRAUTHAMMER: What he did show today is that he is really good on television. He's got a certain charm. He's not adversarial and defensive. When he brought up the brothers, in the long roster of history, there was Cain and Abel. So it doesn't always work out very well.

ROSEN: One other individual which whom Mr. Scaramucci will have to contend is someone who is reportedly dead set against his hiring, and that is Stephen Bannon. Here's how Anthony Scaramucci addressed that individual at today's briefing.

SCARAMUCCI: I've been interviewed about Steve, and he is one of the smartest people I know. I think he was instrumental in helping us win the election. He's got a strong personality. I have a strong personality. The legendary John Weinberg who is now deceased once said some people grow, other people swell. And that's a great line to think about yourself.

ROSEN: Perhaps words to live by.