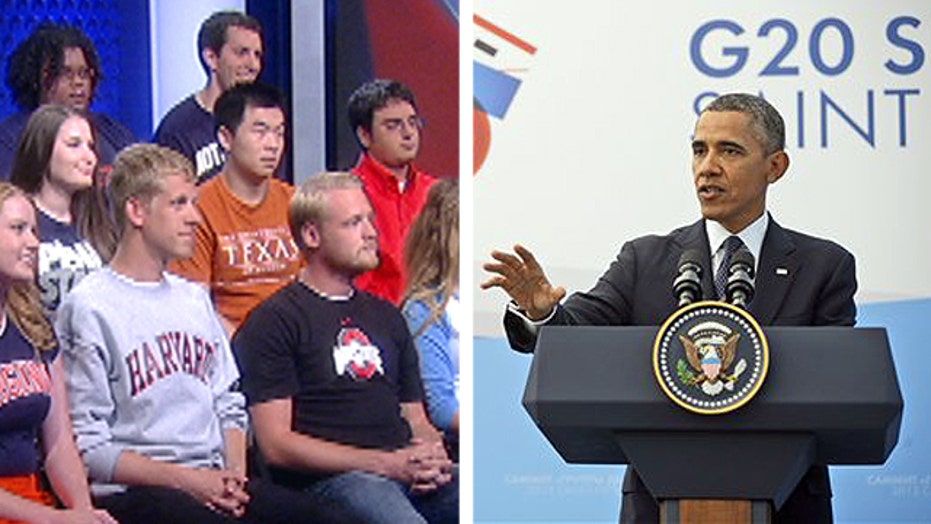 What does ObamaCare mean to college students?

This is a rush transcript from "Hannity," September 6, 2013. This copy may not be in its final form and may be updated.

SEAN HANNITY, HOST: And welcome to a special edition of HANNITY. Tonight, for the entire hour, I'll be joined right here in our studio audience by a bipartisan group of college students and recent grads from all over the country. Exactly half of them are Republicans. The other seven bravely identified themselves believe it or not as liberal Democrats.

So, over the course of the next 60 minutes, we'll going to tackle the hot button issues facing the country from the economy, health care, foreign policy and much more. No subject off limits.

So let me welcome our audience. World is going to be yours pretty soon. Let's start with President Obama. Show a hands, how many think the president has done, he is now in his fifth year, a good job. Hands up.

One, two, three, four, five, six, seven. How many think he's done a poor job? Seven. Right along ideological lines? How many think health care is a good thing for the country, ObamaCare as it is presently -- same seven. Against -- let me play a clip. Because I think this really touches on where you guys are. This is Obama talking about the debt and deficit.

PRESIDENT BARACK OBAMA: We're starting to get health care costs under control. We'll still have to make some modifications when it comes to long term entitlement programs so that they're there for young people here when they are ready for retirement. But we don't have an urgent deficit crisis. The only crisis we have is one that's manufactured in Washington, and it is ideological.

HANNITY: We don't have an urgent deficit crisis. How many agree with that? Two. $16.7 trillion in debt, $90 trillion in unfunded liabilities, and guess who is going to pay it all off? Liz, let's talk to you. What do you think?

LIZ MINNEMAN, UNIVERSITY OF VIRGINIA, REPUBLICAN: I'm really disappointed in the president, especially on the issue of ObamaCare. He said that it would decrease costs and actually, at UVA this year, my school, this past week they came out and said that actually next year they'll have to cut $7.3 million from the UVA health insurance plan because of the increased costs that come with implementing ObamaCare.

So I'm just pretty outraged that this thing that the president and Congress promised would be beneficial to Americans and help to decrease health care costs, are actually increasing it. And the burden of this huge debt is going to be on our generation.

HANNITY: Adam, a Democrat, a Notre Dame. How did you ever get to Notre Dame? Go ahead.

ADAM NEWMAN, UNIVERSITY OF NOTRE DAME, DEMOCRAT: I worked really hard in high school. And they accepted me, so.

HANNITY: Good for you. That proves my principle as a conservative. Hard work, individual responsibility, don't rely on others.

NEWMAN: I mean, I rely on a lot of people. My parents, my school. You know, it takes a village to raise a child. So, can I respond to what she said?

NEWMAN: I mean, the thing is, the Affordable Care Act has been implemented right now, right now we're seeing the lowest healthcare costs increases in a very long time. But you have to understand that a lot of the --

HANNITY: What do you mean the lowest increase? No.

HANNITY: California is going up 164 percent. We have Ohio, his state is going up 80 percent health care costs. Florida is going up 40 percent. There are only four states that will see a decrease. The president said everybody would see a $2,500 decline.

NEWMAN: So, the thing about that is that -- everyone, so those are the biggest states that you're talking about that are having a decrease, but health care costs are still rising. And hopefully with the pilot projects through Medicare and a lot of the demonstration to change the delivery of health care to promote quality over quantity, we're going to see much lower health care costs.

HANNITY: But the president promised you that you would pay $2,500 less per family. That is not true. Does that bother you?

NEWMAN: Sir, I think with that health care costs will increase but they're going much slower because of ObamaCare. So, it is not like it's going to go down precipitously.

HANNITY: Yes. You wanted to weigh in, ma'am.

BRITTANY BRATWAITE, SYRACUSE GRADUATE, DEMOCRAT: So, the Affordable Care Act as I call it, I do believe that it is actually helping us. Right? I know as a young person, I am still benefiting from being on my parents' insurance. And I feel like we concentrate a lot on what it is not doing. It is really good to focus on cost effectiveness as, you know, as has been mentioned about what is lowering and what is going up and increasing, but I think that another idea is that it hasn't been fully implemented yet. So, we're jumping the gun and a lot of things when talking about stuff.

SAM ZUIDEMA, OHIO STATE, REPUBLICAN: Just get back to that clip, we were talking about the deficit crisis and the debt crisis. And if I'm not mistaken, the CBO reported that ObamaCare would add $1.5 trillion to the debt in the next 10 years. And so that's as of right now, over $53,000 per citizen to pay off that debt. That's not even taxpayers, plus $27,000 in debt that we have from school.

HANNITY: This president said about the debt, when he was running for office, we have a $10 trillion debt. That's irresponsible. That's reckless. He has given $7 trillion more to the debt.

ZUIDEMA: If it isn't a crisis, I don't know what is.

HANNITY: You're a Democrat from Harvard. All right? So, president makes promises, debt deficit. He goes up $7 trillion. Whose fault is that? Is that Bush's fault?

HANNITY: What did the president -- do you remember how much the president said, ObamaCare would cost when he sold it to the country?

HANNITY: Nine hundred billion. Who said that? Right there. Right number, You know, what the latest CBO number estimate is?

HANNITY: 2.8 trillion. Name me one governmental program that doesn't cost more than what they project it as. Can you? You go ahead. University of California Berkeley. I won't ask where you are on this but go ahead.

SOFIE KARASEK, UNIVERSITY OF CALIFORNIA, BERKELEY, DEMOCRAT: What I was actually going to say is that, I think this debate is quite misplaced. Because this is a Republican plan coming from a Republican think tank that is supported by a majority of Republicans as long as the term Obama is not actually tied to it.

HANNITY: This bill passed, remember Scott Brown was elected? Wasn't he supposed to be the 41st vote? They passed it just before Christmas in the dark of night. They used reconciliation process. Not one Republican voted for it. So, how do you call it a Republican plan?

HANNITY: Do you think Republicans want --

KARASEK Make sure that insurance companies can't deny you coverage --

HANNITY: OK. But you're going to pay for it. 16.7 trillion in debt. Seven trillion is Obama. You're going to spend the rest of your life paying for that. Does that bother you guys? It bothers you. Why? In the back.

HANNITY: I will tell you, you will work your entire lives paying this back.

SOPHIE TUNNEY, NEW YORK UNIVERSITY, DEMOCRAT: I want to hear from Republicans in this room is, if they think that the way in which Congress has been acting, refusing to pass budgets, making every single opportunity to change this country and block every single time, when you have ObamaCare right now, Republicans are saying that -- not all Republicans.

TUNNEY: But the House is actually threatening to shut down the government so that ObamaCare, not ObamaCare -- the Affordable Care Act --

HANNITY: No, they're not. They're threatening to defund ObamaCare and fund the rest of the government.

UNIDENTIFIED MAN: And shut down the government.

TUNNEY: And shut down the government.

HANNITY: Whoa! That would be -- if they pass and fund the rest of the government but ObamaCare, that means the military, our debt, our obligation, Social Security, Medicare, all paid for exempt ObamaCare. The Democrats would shut it down. Yes?

ERIC STERN, YALE UNIVERSITY, DEMOCRAT: We were just talking about the federal debt and the deficit. But it is a fact that under Obama, the deficit had decreased as a percentage of GDP more than any other time in the last 60 years.

HANNITY: What are they teaching you?

HANNITY: University of Texas, let's straighten this out.

DANNY ZENG, UNIVERSITY OF AUSTIN, REPUBLICAN: Well, in terms of a deficit, it is because Obama self induced and raised a lot of debt his first year. It was 10.7 percent of our GDP in 2009. And this year it's 5.7 percent. So, I guess the president could say he reduced his own deficit if that's where we want to go.

But in terms of a Congress, I want to get back to that. Right after Fourth of July, Obama administration, whose Treasury Department unilaterally delayed employer mandate, and then Congress went in and wanted to actually legally authorize the president to do and it the president called it unnecessary.

UNIDENTIFIED MAN: If I'm in charge of my own money, I feel like I'm responsible. I know what's better for, I want to do with my money than someone else that doesn't know what I'm doing in my everyday life.

YEPES: Do you know of any government in the world that does that?

HANNITY: Hang on. We'll come back. We have to take a break.