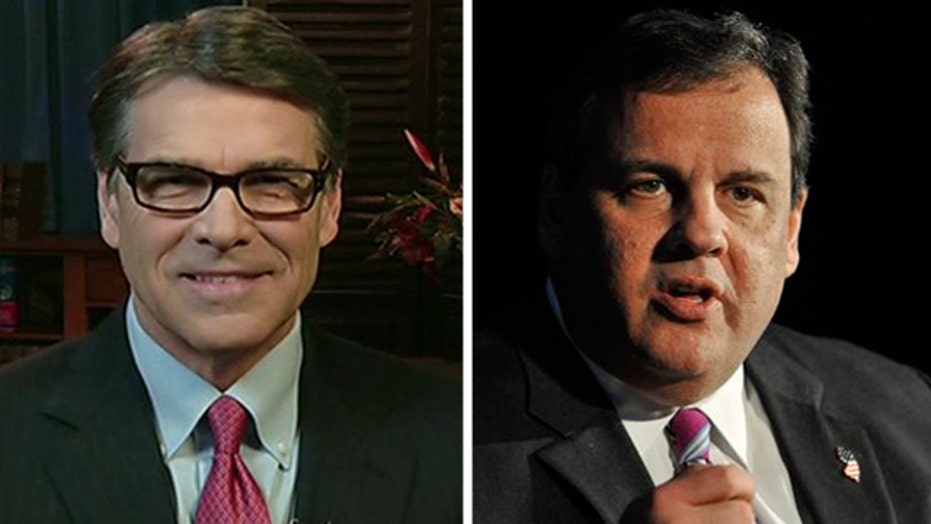 What does Gov. Rick Perry really think of Christie?

Texas governor says they are working towards a common goal

This is a rush transcript from "Hannity," February 11, 2014. This copy may not be in its final form and may be updated.

SEAN HANNITY, HOST: Welcome back to "Hannity." They are two of the most powerful Republicans in the country, and according to an unnamed GOP gubernatorial adviser, Texas governor Rick Perry and New Jersey governor Chris Christie -- well, they don't like each other. Now, the rivalry between the two allegedly began during the 2012 presidential election, and continues today inside the Republican Governors Association, which is now led by Governor Christie.

Earlier today, the RGA announced it brought in a whopping, record- breaking $6 million in January, proving, I guess, that the Christie scandal does not seem to be hurting the governor's fund-raising ability.

Here to set the record straight and tell us much more, Texas Governor Rick Perry. Governor, welcome back. How are you?

PERRY: No, actually, $1.5 million of that came out of Texas, and Governor Christie was here this last week. So we are working towards a common goal, and that is to elect as many Republicans as we can on November of 2014. So, are we competitors? You better believe it, just like I compete against Rick Scott, or Brian Sandoval, or Nikki Haley. We're great competitors, but at the end of the day, we're all on the same team, and that's what really matters.

PERRY: There's 50 different states out there. There's 50 laboratories of innovation, and we all have, I think, different philosophies from the standpoint. But again, the goal and the result is the same. And that's what I -- I don't -- I don't take the bait and get moved off of the focus on what the results are looking for. And the result is that we're all working together to elect these governors because when you look at the states, Sean, the states that are really performing well, creating the jobs, by and large -- I mean, I think nine out of ten top job-creating states are Republican-led.

And so that's the discussion Americans want to have. Who is it out there that can really get this country back working? Who can get their states to performing at a high level. Who can create the environment with tax and regulatory, and legal policies, and a skilled workforce that can put America back on track?

I suggest to you that it's Republicans and Republican policies that these governors are putting in place.

HANNITY: Bobby Jindal is going to eliminate the income tax, wants to do that in Louisiana. Scott Walker -- he's interesting to me because he took over a $3.5 billion budget deficit and turned it into a $900 million-plus surplus that he's given the money back to the people of Wisconsin.

PERRY: And it really is pretty simple. It's closer to $12 billion than it is to $8 billion. And the fact is that -- don't spend all the money. We put good policies into place. But more importantly, we put an environment with tax, and regulatory, and a legal system that says, Listen, we're not going to take more of your money away from you. You're going to have a predictable and a stable regulatory climate. We're not going to allow frivolous lawsuits to go forward. And if you expand your business here, you know that there's going to be a skilled workforce because we got accountable public schools in place.

HANNITY: Well, I mean, this is the thing to me, is that -- all right, for the Republicans just gave the -- in the Congress gave the president a blank check until March of 2015. They demanded nothing in terms of the debt ceiling and giving the money to the president, basically a blank check.

I don't see them out there advocating the way you are for limited regulation, what you call the laboratory of innovation. all of these things you're saying, why aren't the House Republicans and the Senate Republicans fighting on the same level that you are, because clearly, these ideas are working in Texas and Wisconsin and Florida and Louisiana and South Carolina, Ohio.

PERRY: I can't answer that question about why they don't because I think most Americans don't buy into the one-size-fits-all mentality that Washington, D.C., has all the answers. And I know it's hard to give up power and hard to give up control, but if America is going to get back on track, it's going to be having a decentralization back into the states.

ObamaCare is a great example of it, Sean. If you would allow the states to put the type of programs into place that would best suit their citizens -- listen, I think even Andrew Cuomo and Jerry Brown would tell you that they could do a better job of taking care of their citizens than a bureaucrat or even a Congress in Washington, D.C., who's trying to make this thing fit all 50 states, and it's just impossible. It's the reason ObamaCare is going to fail on its own weight is because you cannot implement a health care plan for this country and make all 50 states fit into that scenario.

PERRY: It just won't do it.

HANNITY: Tell me if you think I'm wrong. If the national party in Washington doesn't start doing what you guys are doing on the state level -- and I applaud you a lot for this -- I kind of like the idea of a $12 billion surplus in Texas with no state income tax. That's a pretty compelling story in a country that has $17 trillion in debt and $90 trillion in unfunded liabilities that they're going to owe.

Do you agree with me that if they don't step up and start offering that innovative, positive, solution-oriented agenda that they're going to suffer as a party nationally?

PERRY: Well, I think it makes a lot of sense to allow these 50 laboratories of innovation to come up with the best ways to deliver services for their citizens. There may be some of the states that have a completely different idea. And whether it's social issues or economic issues, I think the states will come up with better solutions for their citizens than leaving it to Washington, D.C. Washington needs to do a few things...

HANNITY: A lot of things.

HANNITY: Everything else, they're failing at.

PERRY: They are, indeed.

PERRY: And frankly, the military is being hollowed out by these policies that are being put in place and the foreign policy that's really putting American allies -- scratching their heads about what is America's foreign policy.

HANNITY: All right, Governor, good job down in Texas. And congratulations. Appreciate it. I hope people are paying attention in D.C.

HANNITY: Got to have to have a positive...

PERRY: You know, we need you down here. We're saving a place for you.

HANNITY: I'm getting out of New York. I'm not loved here.

PERRY: (INAUDIBLE) great place for you.