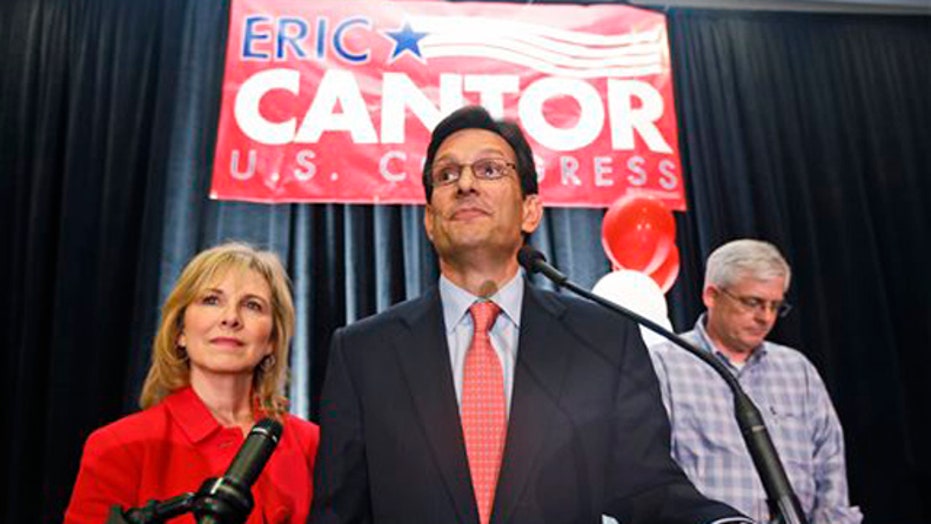 What does Eric Cantor's loss mean for the GOP?

This is a rush transcript from "The Kelly File," June 10, 2014. This copy may not be in its final form and may be updated.

MEGYN KELLY, HOST: Breaking tonight, a stunning development on this primary election night, if you were just joining us one of the most powerful Republicans in Washington has just lost his Congressional bid to a Tea Party challenger who virtually no one expected to win.

Welcome to "The Kelly File" everyone, I'm Megyn Kelly. The news breaking just a short time ago that House Majority Leader Eric Cantor has been defeated by Dave Brat, a little known and little funded political novice. Mr. Cantor was first elected to Congress in 2000 and became majority leader in 2011. His opponent accused him of turning his back on his constituents.

We've got team Fox coverage now with some of the brightest political minds on television. Bret Baier, anchor of "Special Report." Chris Stirewalt, our Fox News Digital Politics editor. Brit Hume, senior political analyst and campaign Carl Cameron. We are joined by phone by Ann Coulter and Laura Ingraham, two folks who had been very much in Mr. Camp's (ph) corner and maybe are surprised tonight but certainly not disappointed.

And I want to start on that with you Bret Baier, because the way the Democrats are looking at this is, there goes those crazy Republicans again, infighting, civil war, don't know who they are, continue putting these crazy Tea Party candidates -- all we've heard about, you know, Dave Brat tonight is that, he's not a crazy candidate, he's an academic who didn't like Cantor's stance on immigration -- but the way it will be painted by the left is they went with the extremist.

BRET BAIER, HOST, "SPECIAL REPORT": Sure. And the releases are flowing out from the Democrats and that's to be expected. They see this as a major scalp because they can say that this is the rise of the Tea Party. I think Laura makes an interesting point about the issue of immigration period, one that we've been talking about and that this is a fervent, really important issue especially for conservatives across the board and if Laura is on the phone, I would love to ask her.

When I was talking about low turnout and reign, clearly this is a small primary as compared to a big turnout for a general election. It doesn't diminish the fact that the passion on this issue is significant. You say that immigration reform, Laura, is something that is a win for conservatives if it is pushed back, if they don't move it forward. So all of the Republicans on the hill who are concerned about 2016 and the demographic shift you think that they are lost, full of it.

LAURA INGRAHAM, RADIO TALK SHOW HOST (on the phone): Well, yes. I mean, first of all, the last two presidential elections we know they nominated individuals who were very murky on immigration at best and in the case of John McCain wanted to go full boar on immigration pathway to citizenship.

So, look, I mean, the idea that somehow the establishment of the Republican Party has a track record of success to run on, whether fiscal management, foreign policy, trade or immigration I think is just laughable.

And in this particular race, Bret, look I was down there, OK. I spent one day there but I've been talking about this race for the last, I don't know, nine weeks on my show, on my radio show. The experts across town and in New York told me basically you're out of your gourd, you're insane.

But from talking to the people there and then talking with many friends of mine on the ground who are not political people, you know what they say? They say we're sick of this Washington scene. We're sick of these people. They say one thing and they do another. Eric Cantor says he's against amnesty one moment, the next moment it's about the Dream Act, we have to help this kids.

And at the same time, this narrative playing out in Southwest Texas with thousands upon thousands of people, adults and unaccompanied minors are streaming across the border, seeing house, clothes, medical care, all the rest. It strikes a lot of people out there -- the whole situation is out of control. And the so-called smart establishment people are either not commenting on it, or they are just not equipped to deal with it or don't want to deal with it.

KELLY: But let me follow you up on that, Laura, because how big of a factor do you think it was? What I hear you saying is, it's not just illegal immigration although that's a major factor, it's hypocrisy, it's reversals, do anything and stay to get in office and stay on office. And on the subject of illegal immigration, the news of the week which is been grossly under covered by this major headline about what is happening right now along our southern border with the influx. I mean, just other viewers know, normally in a year we get about 6,500 illegal immigrant children coming in to this country. This year, the U.S. border patrol -- the U.S. officials are saying we're on track for 90,000, from 6,500 to 90,000 this year. They're saying it could go as high as 140,000 to 150,000 this year with another 150,000 next year.

KELLY: How big of a role do you think that played?

INGRAHAM: I think it played a significant role. I think it's hard to judge it. But Megyn, your show last night with Andrew Napolitano and Dennis Michael Lynch, that segment you did, the lead off on your show we talked about it today on the radio it was one of the most powerful segments I have seen on television really in the last year. It was that -- I think it was that eye-opening for so many people watching. It's not being covered. We have three military bases now being used as many refugee camps for children.

I mean, we've never had anything like this in the history of the country. So, this does telling back this -- for a moment. People are saying, well, this is a big Tea Party victory. Just so people understand this -- the National Tea Party Network, Tea Party Patriots, Freedom Works, I don't believe any of these organizations did anything for Dave Brat. Dave Brat couldn't get Jenny Beth Martin, who is the head of the Tea Party Patriots, the largest Tea Party organization in the country, he couldn't get her on the phone, much to my consternation. The Tea Party groups weren't helping, the National Tea Party groups at all. So, there are little pockets in Virginia, little people followed those Tea Partiers, but there was no national presence except for, you know, people like Ann Coulter or Mickey Kaus (ph) writing about this. Glenn Beck interviewed Dave Brat yesterday and myself.

But, you know, really there had been no -- people have been laughing about this primary and I'll say to everybody watching, don't discount the frustration and the irritation and the fury of the American people when year after year their lives aren't getting any better. That's the untold story here. The American people are sitting by seeing their wealth deteriorate, their prospects go under, their future dismal, and meanwhile politicians either throw up their hands or outright lie to them about the situation. That's what's undergirding us.

KELLY: What about it, Brit -- just so the viewers know. We have posted last night's segment that Laura is talking about on our Facebook page which you can check out at Facebook.com/TheKellyFile. But what about that this was driven in large part by an anti-establishment, we're sick of it attitude among constituents?

HUME: Oh. Well, I suppose in a broad sense you could say that but, you know, we're going to have to -- there aren't any exit polls so we don't have that as a route to determine exactly what was on people's minds. But I'm bound to say, Megyn that there's something slightly odd about this whole conversation we're having here which is this. That it is as if there are elements in the Republican Party and Eric Cantor was among them, who were in favor of amnesty. That is a word that you hear flung around with abandoned by critics of immigration reform of almost any kind.

Now, amnesty is a word with a meaning. You could look it up in the dictionary. And I wish there are people who I wish would do so. And it means pardon. It basically means an unconditional pardon. There's not a single immigration reform measure that is been advanced seriously by anybody, certainly not by any Republicans that would involved an unconditional pardon for anybody. Now, there are rigorous steps, some bills more rigorous than others that would have to be gone through by any of these immigrants to ever achieve a path to citizenship and so forth. But anything that -- amnesty is an epithet. It's basically what it is.

But it has been very, very effective and it certainly I believe was effective against Mr. Cantor and it is not at all clear to me that any immigration measure that he would have ever signed on to would have entailed an amnesty. I don't think that was the case.

But that is where we are on this issue. It is a very emotional, explosive issue and the people who feel the way they feel about it are powerful. But this is not something the country is unanimous. The country favors immigration reform broadly speaking. Nobody is for amnesty and nobody says they are.

KELLY: Of course, I think that term is not being used necessarily in the way that, you know, phrased in the dictionary by people like Laura. It's being used more colloquially.