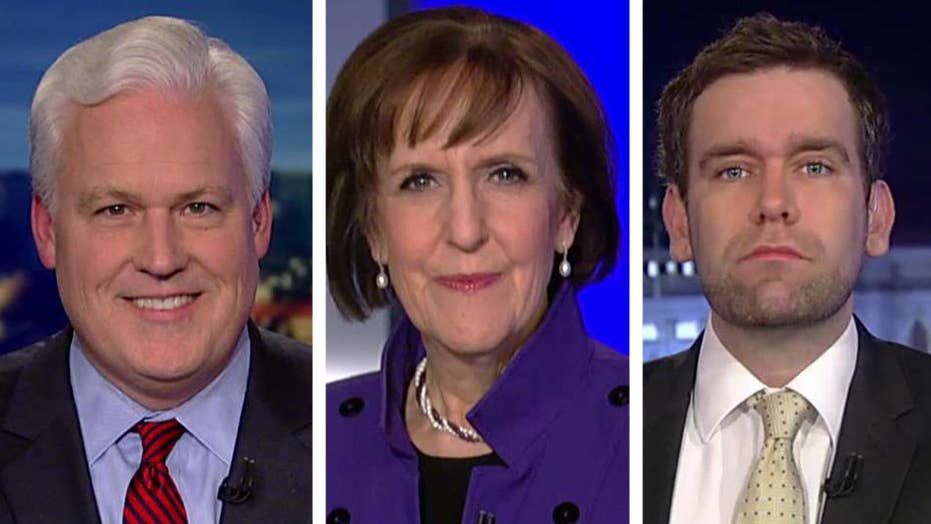 What did the WH know and when did they know it about Porter?

This is a rush transcript from "Special Report with Bret Baier," February 9, 2018. This copy may not be in its final form and may be updated.

PRESIDENT DONALD TRUMP: He did a very good job when he was in the White House. And we hope he has a wonderful career. Hopefully he will have a great career ahead of him. He says he's innocent, and I think you have to remember that.

CHRIS WALLACE, ANCHOR: President Trump expressing surprise and sympathy today for former advisor Rob Porter in the domestic abuse scandal, but he did not mention Porter's two ex-wives who made the allegations against him.

Let's bring in our panel: Matt Schlapp with The Hill; Karen Tumulty of The Washington Post, and Tom Rogan from The Washington Examiner. Karen, did the president's comments today about Rob Porter help tamp down the controversy or further inflame them?

KAREN TUMULTY, THE WASHINGTON POST: I think they further inflamed it. What we are talking about is somebody who has been credibly accused of a crime. And it is hard to think of any other crime where you would have the president of the United States sitting there and saying he did a good job while he was here.

WALLACE: How do you explain it?

TUMULTY: I think that President Trump very much driven by loyalty of people who have been loyal to him. And so I think in this case he has lost track of what the big picture here is.

WALLACE: Matt, let me ask you. You can understand his wanting to reach out and say I appreciate Rob Porter's service. But isn't it remarkably tone-deaf not to even mention when he's talking about sympathies also to the two ex-wives?

MATT SCHLAPP, THE HILL: I think that that's the balance here, right, which is when these FBI reports come in on a White House staffer, they are a raw report. People say awfully good things and people can say very nasty things. The difference is here now you have two ex-wives, one of them who I saw on tape today on television telling their story. And it's jarring. I know Rob Porter. It's a shocking thing that somebody is saying this thing about him. I think it's appropriate to -- I think General Kelly did a good job with his second statement of acknowledging these are very serious charges, as Karen says, they're crimes, and now to be taken very seriously. But it's also shocking to people who worked with Rob who felt like they knew him that something like this could be said about him.

WALLACE: You talk about the fact that Kelly did a good job there. There's been lots of criticism on Kelly and I want to talk to you about that. The Washington Post is reporting that at today's White House staff meeting, the chief of staff, General Kelly, put out a story that a lot of the staffers are on the people do not believe is true, which is that as soon as he learned about the allegations and the credibility of the allegations, within 40 minutes he moved against Porter. Meanwhile two Trump campaign aides, who during the campaign were still infrequent contact with the president, went after Kelly today. Take a look.

COREY LEWANDOWSKI, FORMER TRUMP CAMPAIGN MANAGER: The general is there to put in policies and processes and procedures. And in this case, those didn't work, and we need to find out why.

DAVID BOSSIE, DEPUTY CAMPAIGN MANAGER TO THE DONALD TRUMP PRESIDENTIAL CAMPAIGN: This is an embarrassment for the White House. And it's a setback for the president.

WALLACE: Matt, how much trouble as Kelly in?

SCHLAPP: I think this is a damaging series of events. I think his first response to the charges did not do what Karen said, which is connect to the fact that these are serious charges. And you have to acknowledge that. You might not know what the truth is, but you have to acknowledge that they are serious charges. I do think it's incorrect to say that he knew before that time he said to me, which is sometime on Tuesday.

SCHLAPP: Let me just try to explain that real quick to the viewers. As someone who's been through one of these FBI background checks, they take a long time. Sometimes they will report back there are issues. But once again, it is raw data that people are raising, and sometimes you get people during the FBI process who will then immediately then call someone in the administration to complain about somebody on the staff, which is something that might've happened here as well.

WALLACE: Tom, I promise I'm going to bring you in, but Karen, I have a feeling you are reacting to this. If he learns in September that there are allegations of domestic abuse, why wouldn't his hair go on fire? Why wouldn't he say to the FBI, is there proof? Is there a court case? Are there photographs? And the FBI had all that information last September.

TUMULTY: Exactly. And his primary job is to make sure that the president is protected here, that there is nothing happening that is going to reflect badly on the president. That is what the White House chief of staff should have as a top concern. So yes, he should've been a lot more aggressive from the minute he heard the first inkling of this to finding out what the truth is and not just waiting for the truth to come to him.

WALLACE: Tom, when Kelly first came in, I think it's fair to say the narrative was he was going to be the grown-up. He was going to be the person who imposed order and discipline in the White House. But there have been a number of missteps since he first came. Let's take a look at some of them. Put them up on the screen. He got into a fight over the president's phone call with a widow of a fallen soldier. He said some immigrants were, quote, "too lazy" to apply to Dreamer status. He initially earlier this week called Rob Porter a man of true integrity and honor. And he told Bret Baier during an interview on FOX after talking to a congressional committee that candidate Trump during the campaign was uninformed about immigration. Take a look at this.

JOHN KELLY, WHITE HOUSE CHIEF OF STAFF: He has evolved in the way he's looked at things. Campaign to governing are two different things, and this president is very, very flexible in terms of what is within the realm of the possible.

WALLACE: Tom, we were told the president was not amused by those comments. Is he on shaky ground?

TOM ROGAN, THE WASHINGTON EXAMINER: I don't think he is. I think when you see those slip-ups, there are two things going on there. The first one is John Kelly coming into the White House came from a very different background. The military structure, the Marine Corps, where leadership, trust, loyalty are incredibly important things. But the political dimension of Washington and the press are things that marines are not terribly comfortable dealing with most of the time.

I think the second point, though, going specifically to your question, Chris, is that the cause for the president's regard for military offices, senior military officers who are differential to him, respect the commander-in-chief position, and because John Kelly, consistency ultimately yields to the president and it seems is someone in the White House who does the president's bidding and forces things through, I think he stays.

WALLACE: There are those are infamous anonymous sources who are saying the president is at least talking to people about other names, budget chief Mick Mulvaney, House Majority Leader Kevin McCarthy, Tom Barrack, his old friend, an investor in California. You don't believe those stories?

ROGAN: The president probably is. I think the president sometimes does this though for the narrative. Remember, six months ago before that evening, we were talking about Secretary of State Rex Tillerson was on his way out. We've had it with many names. I think in this case, it's a way of the president saying to John Kelly I'm a little bit upset here, try and improve.

WALLACE: Matt, do you agree with that? You think Kelly stays?

SCHLAPP: Only one man knows. And I think that this is a tough job. Barack Obama had eight chiefs of staff in eight years, and I think with Donald Trump with an outsider as president I wouldn't be surprised if we continue to have staff come and go. But I think John Kelly has righted the ship towards the end of the week and I think it was all rocky earlier in the week.

WALLACE: All right, we're going to have to leave it there, panel.