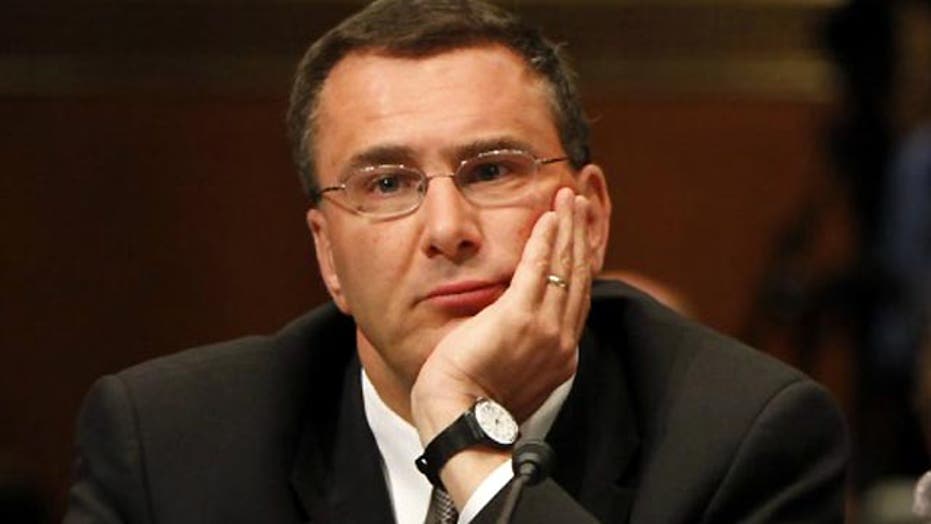 Was the White House lying about Gruber's ObamaCare role?

This is a rush transcript from "Special Report," June 22, 2015. This copy may not be in its final form and may be updated.

JONATHAN GRUBER, MASSACHUSETTS INSTITUTE OF TECHNOLOGY PROFESSOR: Lack of transparency is a huge political advantage. And, basically, you know, call it the stupidity of the American voter or whatever, but, basically, that was really critical to getting the thing to pass.

HOUSE MINORITY LEADER NANCY PELOSI, D-CALIF.: I don't know who he is. He didn't help write our bill.

PRESIDENT BARACK OBAMA: The fact that some adviser, who never worked on our staff expressed an opinion that I completely disagree with in terms of the voters is no reflection on the actual process that was run.

BRET BAIER, ANCHOR: Well, Jonathan Gruber the MIT economist, made quite a splash with some of those videos talking about ObamaCare, talking about the American voter being stupid, talking about a lack of transparency, getting the Obamacare law through. And now a slew of emails, thousands of them, released by the House Oversight Committee show that the relationship was actually a lot tighter with the administration, a lot more communication, a lot more intimate, and the White House was asked about that today.

JOSH EARNEST, WHITE HOUSE PRESS SECRETARY: I think our description of his role in this has been consistent. He did not work at the White House. If there is a bombshell that's included in those emails, it certainly hasn't gone off.

BAIER: OK, what about this? Back with the panel. George?

GEORGE WILL, SYNDICATED COLUMNIST: Well, Mr. Gruber is, for opponents of the Affordable Care Act, the gift that keeps on giving. What the emails say he is important. He should have been. The Department of Health and Human Services paid him almost $400,000 for whatever he did.

This matters because either Thursday or a week from today, on Monday of next week, the Supreme Court will hand down an opinion as to whether the Affordable Care Act should be read as written, that is, should be read that subsidies can only be delivered through exchanges established by the states. The question is, is that language purposeful as it is plain? Mr. Gruber is on record as saying it was written deliberately to, and these are his language, squeeze the states to compel them to be collaborators in the Affordable Care Act. It's too late for this revelation to influence the Supreme Court. We will read the Supreme Court opinion in light of this.

WESLEY LOWERY, THE WASHINGTON POST: Of course. And I think what the White House press secretary, Josh Earnest, said there was not inaccurate in that there was no huge smoking gun bombshell in these way at least based on the way the Wall Street Journal reported them. But what is becoming increasingly clear time and time again is that Jonathan Gruber was closer to the White House and closer to the process of writing this bill, this legislation that became law, than the White House has ever led us to believe --

LOWERY: And she very well personally may not have known who he was. I don't believe that Nancy Pelosi is in the basement of the Capitol Building personally writing legislation. There is a good chance she might not have known who he was. But with that said, what it does show is that there was a relationship here, an ongoing relationship where he was not someone who was brought in one time to give a pass at legislation, give an up or down or give an expert opinion. But he was intimately involved in crafting some of the language here. That is important.

That said, the fact that he was emailing them to tell them about media interviews he'd done tells me he might not have been the architect, because I would like to believe that the Obama White House would be clearing interviews being done by people who are, in fact, writing their legislation. But who knows?

CHARLES KRAUTHAMMER, SYNDICATED COLUMNIST: Look, the White House dealing with this is a classic example of Clintonism. This was a Clintonian explanation. Yes, he did not work at the White House, meaning he wasn't an employee. But he got almost half a million dollars as a contract worker. So he was working with the White House for the White House. And what the emails show is intimately with the staff who crafted legislation. One of the emails that was revealed came from a top Obama health adviser to Gruber, "Thank you for being an integral part of getting us to this historic moment." In another email she called him "Our hero." Well, the guy was hero, he was integral. Yes, he didn't work at the White House, but obviously he was, and he did reveal the secrets.

BAIER: All right, it's fair to say that the president downplayed his role as some adviser who never worked on our staff.

KRAUTHAMMER: And it's all word play. Everybody understands he was a big part of this. Architect or not, he was the general contractor. I don't care. But he was important. And what he said revealed the underlying motives that embarrassed the administration and that we all know were true -- deception and obfuscation. And it worked.

BAIER: Does the Supreme Court shoot it down, the federal subsidies?

LOWERY: I won't get into the prediction game. I'm not sure.

WILL: I think it will read language as plain and purposeful.

BAIER: All right, thanks for being here, Wesley.