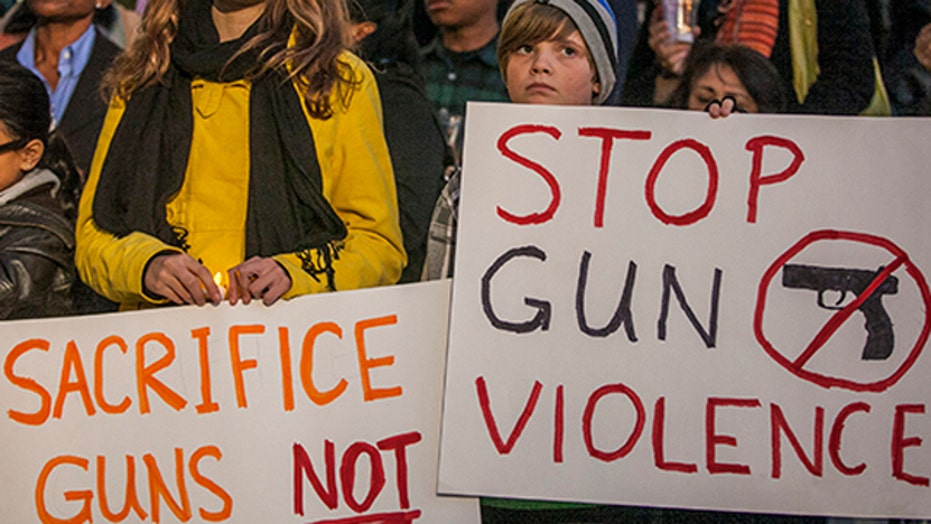 Violent crime in US hurting US economy?

WAYNE ROGERS: In the 10 most dangerous cities in the United States you have poverty on the rise, you have unemployment on the rise, and you have crime on the rise. When you have crime on the rise you've got to do something to counter that. So the police tactics, and the things the polic have to do to bring order back, have to increase-not at the sacrifice of personal rights, but it has to increase in some way. For example, Juan, who is on the show today, said the other day-which I think is very key-that the civil rights workers in this country, I'm talking about the Al Sharptons and those kind of crazy people, have got to take responsibility to go into these neighborhoods and lead these neighborhoods. Say something positive, not be negative all the time. Juan, you did a great job on that. I saw that, and I think it's a terrific idea, and that's what has to take place.

JUAN WILLIAMS: The 10 most dangerous places have poverty, unemployment, failures, dropouts from schools, and a high percentage of minorities. It hurts my heart. Wayne, this is what you need: you need leadership that will come in and speak to kids who are not advancing, who are not making any progress, and instead getting involved with gang activity, getting involved in violence-it's how they're going to prove that they're somebody in this world. That's a losing prescription. You've got to believe in education. You've got to believe in a job and building a resume. I don't think that this is a mystery if you want to make it in America.

JONATHAN HOENIG: A job would be great-- even maybe a minimum wage job would keep a young person out of trouble and focused on producing. It's less likely there will be this type of violent crime in a stronger economy. Young people-and of course we've got a youth unemployment rate in this country north of 18 percent-- young people are less likely to see a future where they can achieve their goals and succeed. I'll tell you, it's not just here at home. Look at Spain, look at Greece; terrible economies, youth unemployment above 50 percent, and a massive spike in not only suicide, but violent crime, as well.

KATIE PAVLICH: We've seen this in New York City, we've seen it in Washington DC. When you take an area and you turn it into a place that has business, that has people employed, that has those jobs that can get young people into the workplace and keep them busy, it's very important. Going back to the arguments that Juan has been making all week about the families and these communities-the statistics are there. When these families' homes are broken, kids who come from single-family homes are more likely to live in poverty, more likely to commit crimes-- and that, in return, has an impact on our cities, on out prison systems, and it costs us a lot of money, both in lives and in dollars.

JONATHAN HOENIG: This whole idea of spying against national security-it's a false choice. Despite all the monitoring that's already gone on we missed Benghazi, we missed the Boston bombing, Iran's nuclear ambition grows, and Jihad around the world continues to grow. Spying does not keep Americans safe. It'd be like trying to win World War II by monitoring who was going to sushi restaurants or binging on German sausages. How we win a war is by naming the enemy, and taking military steps to defeat them. So a proper war on state-sponsored Islam would leave us free not to worry about government spying on American citizens.

JUAN WILLIAMS: I think it's an outrage because I'm big on civil liberties. I think we should be protected in terms of our privacy, but I must say this is not so much directed at us. It's about keeping us safe. Jonathan says you could do it without it, but I'm not sure. I tell you, if there was a terrorist incident, boy would we all be up in arms. Remember, a lot of this takes place under the Patriot Act.

WAYNE ROGERS: There is no helping out, Eric. It's a violation of the Fourth Amendment. By the way, this thing is called the Foreign Intelligence Surveillance Act. It starts with the word "foreign". It doesn't say anything about domestic snooping. We've got domestic snooping going on all the time. By the way, this could happen because Eric Holder, who's verocity is comparable to that of Pinocchio-Eric Holder can start this kind of stuff, and they have a law that says "special needs". You can take an exception to this and call it "special needs," and therefore start blanketing anybody. It's outrageous. It should stop.

KATIE PAVLICH: The NSA has turned out to be a lot like the TSA. They look like they're doing a whole lot of good, but they're actually not doing a whole lot of good. As Jonathan pointed out, we haven't seen a whole lot of results from this program. We did see the Boston bombing, we saw Benghazi. What worked, which Obama got rid of, was water-boarding, taking prisoners and asking them questions. That's where we got our intelligence from. We're no longer doing that, and now we're spying on Americans instead. The Patriot Act was written in a way-Jim Sensenbrenner came on and said "look, I wrote the Patriot Act. This is not what it was supposed to be used for. It has been corrupted. It's time to scrap it and start over."

KATIE PAVLICH: This is the exact message kids should be hearing. Kids these days, right? But I think the attitude is everyone wants the next fancy iPhone, everyone wants the new fancy thing. They don't understand that takes work to obtain those things. I've seen a lot of young people turn their nose up at these entry-level jobs that do get you to your next paycheck, and your next job. So I'm glad to see someone with such a platform talk about how hard work gets you places and opportunities, not pretending like you're entitled and should be given something.

WAYNE ROGERS: I'm not surprised to hear Ashton come out in support of jobs. I'll tell you why: the man is making $750,000 an episode. He's been pre-eminently successful. It's pretty easy to talk about getting jobs when you're making that kind of money, and I certainly don't need Rush Limbaugh to explain it to me. Let me tell you something, he's absolutely right. He's right on, and he's an example of it because he has produced. That's what's good about it.

JONATHAN HOENIG: It is a good message, Eric. In my experience young people want to work. They want to work, they want to trade, they want to produce. They make lemonade stands. They want to do chores for extra money. They understand that work is empowering-not just for money, but for self-esteem. And then they get to the public schools, and the schools teach them that life owes them freebies, that they're guilty for wanting to make money, for wanting to pursue their own self-interest. So I'm happy to see Ashton, and any young person standing up for capitalism, standing up for Americanism, and saying "yes, your life matters, and you've got to get on your feet to make it happen."