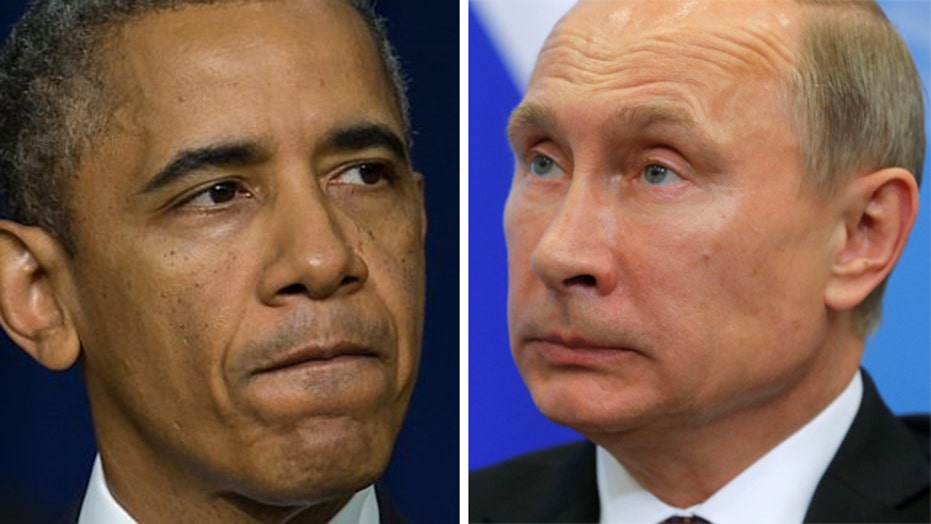 MICHELLE FIELDS: President Obama is sitting there filling out his March madness bracket while Putin is basically reuniting the Soviet Union. It's amateur hour right now in Washington. Putin correctly calculated that we had a weak leader, and now President Obama's sanctions are being met with mockery. What is President Obama going to do next? Is he going to remove Putin and his buddies from the White House Christmas card list? He is the leader of the free world, and he needs to start acting like it.

JONATHAN HOENIG: What makes a country a superpower is its commitment to individual rights, it's their commitment to freedom; it's not their natural resources or willingness to annex other countries like Putin is doing. What I think he'll find is that dictatorship is bad for business. Even before this action, the per capita GDP in Russia was about $14,000, compared to $50,000 in the U.S. Russia's stock market and currency have been crumbling. And keep in mind if he's headed, to Michelle's point, in the direction of the Old Soviet Union, the Old Soviet Union couldn't even feed itself at the end. As long as we stay free, we'll stay a superpower.

JEHMU GREENE: In addition to going on Ellen he is doing other things. The frame I just reject. This is not about Russia versus the U.S. as a superpower. This is about working with our allies to hold Russia accountable, deterring further aggression, and making sure that we support the Ukrainian people. When I listen to Michelle's remarks I'm like "woah, wait a second, are supposed to remember politics stops..."

WAYNE ROGERS: He (Putin) is (playing better) because he's got power. You have to realize Ukraine is next door to him, right on his front door step. We're not going to go over there and invade them. We're not going to go over there and have military strikes against the Russians because of this. So you've got to ask what can the President do? Yes, he can invoke sanctions, but the sanctions he has to invoke have to be very meaningful. For example, Germany gets 40 percent of its energy from Russia. So you can't ask the Germans to cut off their nose to spite their face. What you can do, though, is say "we will supply you, we will get the pipeline and go through from Canada down to the coast. We will let the Keystone Pipeline go through so we can help you-you in Germany and you in the rest of Europe-we can help you invoke these sanction, and we can make it meaningful.

JONATHAN HOENIG: All these celebrity endorsements, the "bro-surance" ads, the ads during the Olympics, the appearances on Ellen. It's all so uncouth. Not just the fact that we're spending $20M a month on it, but the fact hat it's all trying to convince young people that state-ism is good, that self-sacrifice is good. what does the President think of young people? They're knuckle heads, they don't know a good deal, they're idiots. In fact, almost 90 percent of young people find it's cheaper not to sign up for ObamaCare and pay the penalty. And of course none of this has anything to do with free markets or a free society.

WAYNE ROGERS: Even worse than that, Eric, is the fact that they're spending our money to promote it. If it's so good, why does it have to be sold? I mean you don't have to sell the Super Bowl, you just announce that the tickets are for sale and people want them. This is a disaster, the whole law is a disaster. The President has changed the law himself 28 times-illegally, of course. Even after the Supreme Court passed on it-- this is an outrageous thing that's going on, and we should stop it right now. Stop the whole thing, get rid of it, repeal it, and start over.

JEHMU GREENE: I would take the NFL marketing budget and retire and buy all of y'all's homes. Of course the NFL markets the Super Bowl. Wayne, I'm scratching my head. 5M have signed up. Young people exist on a steady diet of humor. Of course the President-we may think it's undignified as folks with gray hair-but the President is talking directly to them. On serious issues they get their news from "The Daily Show" and the "Colbert Report". This makes perfect sense. 75 percent of those 5M people have paid their premiums. This program's working.

MICHELLE FIELDS: 5M people have signed up, they say, and they estimate that only 20 percent of those people are young people, which is not enough in order to keep premiums down. A bad deal is a bad deal, which is why people are not signing up for ObamaCare. They average 27 year old man in America is going o see premiums skyrocket for them. They're going to see it go up by 97 percent. The average 27 year old woman in American is going to see their premiums hike by 55 percent. That is not a great deal, especially for a group of people who are having a 17 percent unemployment rate right now. The average young American graduates with $35,000 in debt. This is not a great deal. This is terrible.

MICHELLE FIELDS: I think this is reckless. They're talking about UFOs, black holes-pretty soon they're going to start debating whether the plane even existed. It's reckless. It's not keeping people knowledgeable, they're not talking about the facts, and we need to remember this is a serious issue. There are people who are missing their family members, who have not slept, and I think that a lot of networks need to start having their coverage reflect that.

JEHMU GREENE: We have gotten a lot of facts. I've been glued to Megan Kelly's show every night being downtrodden with a bunch of facts, but there are people, myself included, I look at the facts. There are more planets than grains of sand. I know there's intelligent life out there, so I could see how someone would say maybe a UFO is connected to it, but that's not the majority of the coverage.

WAYNE ROGERS: Get a crystal ball. Go to the Dalai Lama, ask him. It'd be a lot better than some of these things. I just feel bad for those families out there who are suffering and they have to listen to all of these people dreaming up wild theories about why these things happened. Look, it's a mechanical failure or it was a hijacking of some kind, and it doesn't really matter. Ultimately you have to care about those families.

JONATHAN HOENIG: All thee crackpot theories "maybe it was a UFO". All this Alex Jones skepticism is really an attack on reason, right? I mean, hey maybe a zombie took over the place. We can't know anything, right? We separate the wheat from the chaff in the marketplace of ideas. I think the best ideas stick around, the bad ones go home, and that's reflected in the ratings, ultimately.