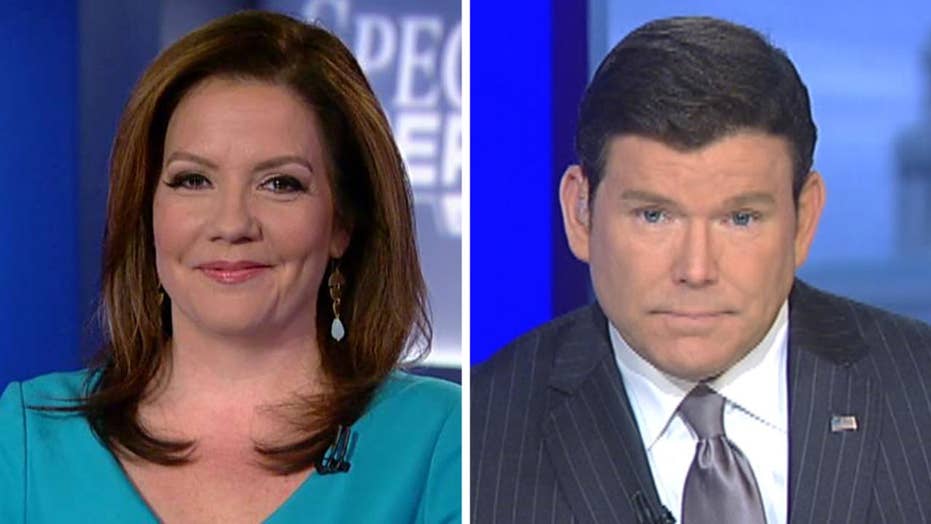 US and allies defend strikes on Assad's chemical facilities

This is a rush transcript from "The Five," April 16, 2018. This copy may not be in its final form and may be updated.

PRESIDENT DONALD TRUMP: With way over 100 missiles shot in, they didn't shoot one down. The equipment didn't work too well, their equipment. Every single one hit its target.

NIKKI HALEY, U.S. AMBASSADOR TO U.N.: We were not looking for war. We wanted to send a strong message that they needed to stop the chemical weapons program. That message was heard loud and clear around the world.

HEATHER NAUERT, STATE DEPARTMENT SPOKESWOMAN: We believe we degraded their ability to use chemical weapons to kill people.

BRET BAIER, ANCHOR: Syria, reaction around the world to the strikes, 105 missiles, the president saying all hitting their targets, none shot down by the Russians. Here's the British prime minister.

BRITISH PRIME MINISTER THERESA MAY: This is not about intervening in a civil war and it was not about regime change. It was about limited, targeted, and effective strike that sought to alleviate the humanitarian suffering of the Syrian people by degrading the Syrian regime's chemical weapons capability and deterring their use.

BAIER: OK, back with the panel. Critics on both sides, Olivier, some saying this shouldn't have been done in the first place. Others say it didn't go far enough and didn't push the buttons that they needed to push.

OLIVIER KNOX, SIRIUS XM: According to the Pentagon if you take their account of the strike it was very tactically successful. All 105 found their targets. They said the targets were destroyed. The question though now becomes what happens to the strategy? But right now the U.S. strategy in Syria is pretty muddy. We had Secretary Tillerson earlier this year describing in expansive terms an effort to achieve a political to contain Iran and of course to finish the job of defeating ISIS. Then we had the president saying that we were going to get out of Syria as soon as possible even while across town the general running the war was laying out the reason for staying.

Then we had the French president saying more recently yesterday in an interview that he convinced President Trump to stay in for the long term, which the White House then characterized as, well, there is no timetable exactly but we still want to get out.

So the question for me right now is what the American strategy in Syria? Is this a one-off? It was tactically successful, but what happens to the strategy now?

MOLLIE HEMINGWAY, THE FEDERALIST: I think you are seeing a lot of pressure for this to be made into something bigger. You see interventionists on both left and right who are upset that this wasn't a bigger strike, that they wish that more was happening here.

But I think that, I read Thomas Lifson put it well. He called it a goldilocks strike. Not too cold, not too hot, but just right. Not too much to invite aggression. Not too little to invite them to use chemical weapons. And the instincts that Trump had, which were to stay out of Syria, he seems to still be pushing for against all this criticism who want him to get more involved and be more embroiled in yet another Middle East conflict. Those instincts are probably right that he has.

MIKE ALLEN, AXIOS: Bret, to pick up on the president's instincts, we learned two things here. One, we have known that he has been contradictory about this and conflicted himself about what resisting, going in and talking two weeks ago about getting out of Syria, but then responding to these pictures that we saw here on "Special Report" again and again. The personal connection, the emotional case is what carries the day if you are in briefing this president.

And then second, we saw the president went with his generals, and time and again on national security questions this president has been in the 40-yard line of Republican national security policy, and we saw it again. He wanted to go bigger, the emotional response. He stuck with what the secretary of defense, General Mattis, was recommending, more limited, more restricted.

BAIER: And also that speech was pretty comprehensive. It was laid out on the night of the strikes. It kind of said we're not in it for the long haul. We're not going to be there forever, but this needs to stop, these chemical weapons.

The question about the sanctions and whether Nikki Haley was over her skis or whether there was some confliction about whether they were going forward with more sanctions or not, what do you think about that?

KNOX: I think it's rare actually to announce the precise day when you are rolling out economic sanctions because you don't want to telegraph your movement. By this point prominent Russians have to know what's coming.

She did get a little bit over her skis, but it's -- what struck me was it is rare to announce this stuff. It also highlighted something, which is there is a difference between the Trump administration Russia policy, and Donald Trump's policy towards Russia, where the administration has been pretty tough. If you look at issue after issue, just take one, providing lethal defensive aid to the Ukrainians, something the Obama folks resisted out of concerns it might escalate the conflict there. That's a big step.

BAIER: The focus on why these sanctions didn't come on, does it have to do with Russia. But there's no looking back at what actually has happened with Russia.

HEMINGWAY: When there are so many sanctions placed on individuals or corporations in Russia that doesn't get a lot of media coverage. We hear all this about supposed kompromat that is binding the president. But when he actually does take a hardline against these people, and not -- you can be harsh against Russia without actually wanting to go to war against Russia, too.

ALLEN: And this is occupational hazard of being a Trump Cabinet member or administration official. It's clear as Olivier suggested, she was articulating the administration consensus at that moment.

BAIER: We'll see where it goes. We will cover it all.