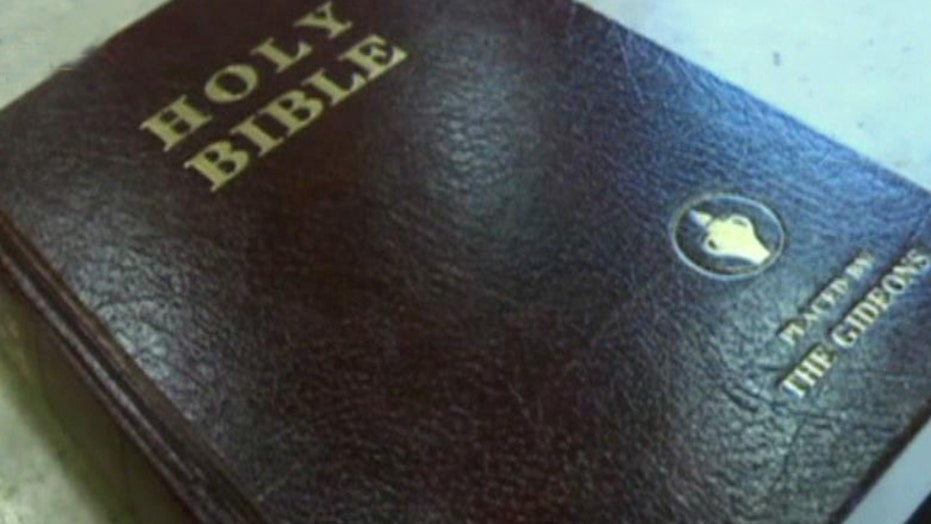 This is a rush transcript from "Hannity," February 19, 2014. This copy may not be in its final form and may be updated.

SEAN HANNITY, HOST: Bibles in hotel rooms, that is standard practice in the U.S. But it wouldn't be any more if one left wing radical atheist group has their way. The Freedom from Religion Foundation received a complaint about they call, quote, "religious propaganda on state property" at Iowa State University's Memorial Union Hotel. They then lobbied the director of the Union until he agreed to remove all the Bibles from his rooms effective March the first.

Here to explain why she sees this as, quote, "Reason and Constitution and the constitution prevailing" is the co-founder and co-president of the Freedom from Religion Foundation Annie Laurie Gaylor. It's been a long time, Annie. How are you?

ANNIE LAURIE GAYLOR, FREEDOM FROM RELIGION FOUNDATION: Yes, it has been. I first met you way back in Alabama.

HANNITY: I debated you way back in Alabama, that's right. I'm getting younger every day.

Tell me what -- you go to the hotel, you and your husband or any member of your organization. So they have the Bible maybe at a -- in a drawer next to the bed. Tell me how you're so offended by this, that it is so outrageous, those people who would like it would have the choice to open it, forced to open it, doesn't take up space. Why is it such a big issue for you?

GAYLOR: Why would a university place a religious book in a hotel room?

GAYLOR: Unless there was a message of endorsement. We think you should be reading this book or we think you would want to read this book. Imagine the outcry if somebody opened up their bedside table at a public supported institution and found Richard Dawkins "God Delusion" or found a Koran.

HANNITY: We're talking about the Bible. If they wanted to put a Koran in there, I would have no problem. You're acting like you're so offended. And you're not offended. I don't believe for a second you're offended. I'm sure your organization will raise money on this, you'll send out letters saying you took on Iowa University.

GAYLOR: Well, I am offended because --

GAYLOR: I don't like to pay high prices to stay in a hotel room to find a book in there that says that I should be murdered, that blasphemers should be put to death, that homosexuals are an abomination, that women are subordinate, that it's OK to abuse children.

HANNITY: Don't open the book. They've got channels on the TV that you don't like. You probably don't like to watch me, usually.

GAYLOR: Well, you said that I am not offended, but I am offended by the Bible because I don't think there is another book where between whose pages life is so cheap, that sanctifies genocide.

HANNITY: You get off on insulting people's deeply held religious views. I know that's part of your thing. How much money does your organization take in a year?

GAYLOR: Well, actually that is none of your business.

HANNITY: That's none of my business? Because you're going to raise money off of this, aren't you?

GAYLOR: No, we haven't raised any money off it --

HANNITY: That little Bible that sits there is not offending you, but you're going to send out letters and raise money.

GAYLOR: We wrote a letter and pointed out that this is an --

HANNITY: You're going to raise money because you're not really offended. I don't believe that for a second.

HANNITY: And will you get checks in the mail supporting your group?

GAYLOR: Well, we are a membership organization and we do invite people who are free thinkers to join us. We are the largest atheist and agnostic organization in the country.

HANNITY: Are you pro-choice?

GAYLOR: -- and we offer a free service to members of the public who encounter violence of the separation of church and state.

HANNITY: If the Bible is tucked into the drawer next to the bed and you choose not to open it, just like you may not want to watch a channel on TV that is on their channel, maybe even religious channels -- you are saying something that to me just makings zero sense and that I don't believe, and that you are so deeply --

GAYLOR: Well, I would think you would be offended if you found "The God Delusion" and atheistic materials in a hotel that was supported by the government, a public university hotel. Don't tell me you wouldn't be.

HANNITY: Up until the early 1960s the Lord's Prayer was said in school, Bible reading was done on a regular basis until two Supreme Court decisions. That means from 1776, our founding document, our declaration, through 1787, all the way up until the 1960s, Bible reading was done in school and the Lord's Prayer was said. And guess what? A theocracy never emerged in America. Isn't that interesting.

GAYLOR: Sean, that is not true.

HANNITY: It is true.

GAYLOR: No. In the state of Wisconsin, for example, our Supreme Court out lawed Bible reading in the public schools in 1890. The same was true in other states. It was a fairly recent thing that happened in the 50s that you had so many states deciding that the Lord's Prayer, we owe a great debt --

HANNITY: Annie, with all due respect, you guys on the left are just intolerant. It doesn't bother you, it doesn't offend you. You're going to raise money off of this.

GAYLOR: I'm intolerant of violations of the First Amendment.

HANNITY: I don't believe this is so offensive to you.

GAYLOR: I'm intolerant of the government telling us --

HANNITY: You don't have to read it.

HANNITY: It can sit in your night stand, and you don't even have to open it. Amazing. You're pro-choice, right?

HANNITY: You can choose not to open it.

GAYLOR: But the government telling me I should have it at the bedside table.

HANNITY: It's sitting in a nightstand!

GAYLOR: If I want to buy it, I will travel with it. People who are that pious that they can't go to sleep without reading a Bible will carry one with them.

HANNITY: You don't have to open it.

But I got to go. Good to see you, it has been many years. Appreciate it.