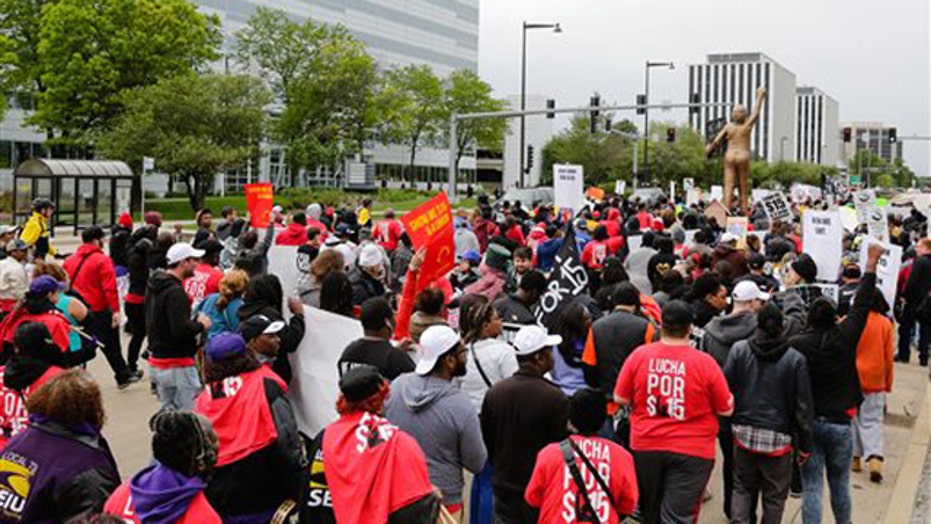 Union-backed protesters asking for $15 an hour

Susy Welch: I wish we lived in an economy where people could make $15 an hour, in fact, there are scads of kids graduating from college who will not make that much money. I am with Warren Buffet, if the wage goes up there will be fewer people working and they will be working fewer hours. That is a terrible price to pay for the political aspirations of these unions. They are saying Mickey D’s is trying to maximize their profits  but they are too with union fees. This is subterfuge.

Nomi Konst: The Unions weren’t just protesting the wage increase, they were protesting the fact that shareholders have been using their profits to buy back shares for immediate returns rather than investing in pensions, which is why unions exists.

Gary B. Smith: The world would be a better place if the left was around to tell Andrew Carnegie and the Rockefellers “Don’t worry about that profit stuff! That’s idiotic; you should build it into Pensions! ” It’s not the lefts place, however well intended, to tell business how to run.

Jonas Max Ferris: The minimum wage worker, most people believe they deserve to get more. We can argue the negatives of the economy but the public support is with raising the wage. They are on it to make it look like they care about the worker.

Suzy Welch: It’s a tale of two cities. We have been to 21 cites, what you hear is two starkly different stories. When you are in the Midwest and the rustbelt people say there is no recovery. In the west coast and the southwest and its like 2007, I could have 15 jobs tomorrow. It’s a different reality. When you have these two different realities politicians will use it to there advantage and nothing will get done.

Nomi Konst: Technically our economy is great, but those making under $75,000 dollars have no money to invest.  This is a huge problem in America. Income inequality is so vast. This is a big problem, where are you going to find this income to feed your family?

Jonas Max Ferris: Inflation is a good thing, you want prices to go up 1 to 2% a year. This is a good figure this week. Things are getting better not worse.

Suzy Welch: I think you are taxing the wrong people, its very regressive. People who live far away from the city because they can’t afford to live close to the city are going to be taxed. Middle class families who drive for their vacations instead of flying are going to get nailed, let alone the logistics of figuring it out.

Gary B. Smith: This is perfect, where in America do you not pay for what you use? If you use something a lot you should pay more! This is the way to go, we have the technology. It should be on every road in America.

John Layfield: You can’t trust politicians with money. The gas tax, 40% of it goes to special projects. We actually have money to spend on infrastructure, its not being used.

Nomi Konst: Who is wearing and tearing our roads, it’s the corporations! So why aren’t they getting taxed?

Jonas Max Ferris: We are going to have to tax something other than gas in the future. But you will kill the electric car industry if you start it now. We should still tax the gas and start the miles in a few years.