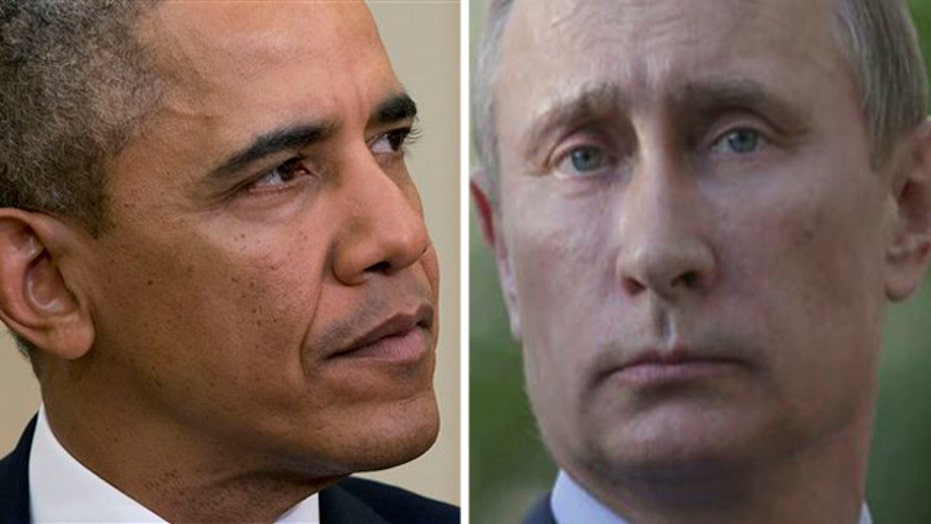 Ukraine a political crisis for Obama?

This is a rush transcript from "The Kelly File," March 3, 2014. This copy may not be in its final form and may be updated.

Robert Zimmerman is a veteran and democratic strategist and co-founder of Zimmerman/Edelson Public Relations. Robert, welcome. Good to have you with us tonight.

ROBERT ZIMMERMAN, VETERAN DEMOCRATIC STRATEGIST: Good to be with you.

MACCALLUM: What do you make of these criticisms of the president?

ZIMMERMAN: Well, certainly, let's be realistic about it. The criticisms you're hearing from many of the Republican leaders in the House and Senate are really just in fact -- all the proposals, really the proposals the White House is under is considering and planning to implement. So, there's political posturing from the Republican leadership, and it is unfortunate when you need unity to have this kind of posturing take place.

But it is really irrelevant, it's irrelevant for several reasons. First of all, the Republicans' Congress ratings are lower than any other branch of government. So, I think it is important not to overstate their influence politically. And secondly, in fact, you see a sense of unity in terms of the actions that are being put on the table.

MACCALLUM: But let's take a look at some of the reactions of some of those who have spoken out about what's going on. Watch this.

SEN. JOHN MCCAIN, R-ARIZ.: This is the ultimate result of a feckless foreign policy where nobody believes in America's strength anymore.

REP. MIKE ROGERS, R-MICH.: Russia believes that there is nothing going to stop them

Putin is playing chess, and I think we are playing marbles.

SEN. CHRIS COONS, D-DE.: I frankly think this is partly a result of our perceived weakness because of our actions in Syria.

SEN. LINDSEY GRAHAM, R-S.C.: We have a weak and indecisive president that invites aggression.

MACCALLUM: Robert, I mean, you heard all that criticism over the weekend.

ZIMMERMAN: Of course, you know, Martha if you could implement foreign policy through sound bites or tweets then maybe their comments would be relevant. The reality is negotiations are a serious and difficult process. And this president, President Obama showed himself to be very effective at building coalitions. We saw that with the sanctions that were implemented in Iran which ultimately forced the peace process to move forward. And clearly, he is working well with our European allies in putting sanctions in place.

But, you know, I'm not saying, we don't stumble as we did in Syria, I would rather have an administration stumble in terms of building negotiations and building coalitions than stumble into war like we saw in the previous Bush administration.

MACCALLUM: You know, I want to go back and listen to what John Kerry said about Syria, back when there was a military option on the table in Syria. Watch this.

JOHN KERRY, SECRETARY OF STATE: We will be able to hold Bashar Assad accountable without engaging with troops on the ground or any other prolonged kind of effort, in a very limited, very targeted, very short-term effort that degrades his capacity to deliver chemical weapons without assuming responsibility for Syria's civil war. That is exactly what we're talking about doing, unbelievably small, limited kind of effort.

MACCALLUM: An unbelievably small, limited kind of an effort. Many think that the way Syria was handled opened the door to a weak foreign policy, Bob, just quickly and then I have to move on.

ZIMMERMAN: Well, there's no question. There are mistakes made along the way in Syria. But there is a process in place hopefully will work. Let's not kid ourselves, when President Bush didn't even consider sanctions after Putin invaded Georgia, that certainly undermined our role in the world. Not to mention the Europe's dependence upon oil and natural gas from Russia.

MACCALLUM: I've heard that criticism a lot today and I wonder, you know, if that is the truth then the administration might have learned from what they see as mistakes by President Bush. But that doesn't appear to be happening.

ZIMMERMAN: Well, quite to the contrary, Martha, the fact that this president has been able to unite our European allies to take action, that is a significant example of the fact that were improving on the mistakes on the past.

MACCALLUM: Bob, thank you very much for being here.

Colonel, welcome, as always, good to have you here tonight. You have heard both sides laying out their argument for what should be done here. What do you think?

LT. COL. RALPH PETERS, FOX NEWS STRATEGIC ANALYST: Well, it is interesting to hear George W. Bush get blamed for the problem in Ukraine, Crimea. Look, I'm not interested in what political wankers have to say about this. This is a real strategic issue. It's not about scoring political points.

The reality is, Vladimir Putin has seized Crimea from Ukraine. He is never going to give it back no matter what we do. The only question that matters strategically is will he be content with Ukraine, Crimea? Will he grab the eastern third of Ukraine, as well, the Russian speaking portion? Or will he grab it all? And if so, when will he do these things? He is in a position now, he has seized the Crimea, and nothing happened to him and nothing will by the way. He is ready to go into Eastern Ukraine, whether he does it tomorrow or next week or in a month, I think he probably figures in for a penny, in for a pound. He may not go for all of Ukraine right now, but --

MACCALLUM: There is nothing standing in his way Ralph, is what you're saying?

PETERS: Nothing. There is nothing.

PETERS: Well, there is nothing that is practical. I mean, you hear well, we should fly in token forces or Special Forces. We're not going to do it. And I would be against it because Putin would fire. He would shoot. He would open fire. And Obama would not back our troops up.

Look, I am not for military intervention, I am for any serious economic punishment we can wield against them as punishment. The Europeans are not going to go along with it, at least not for long. We are witnessing an aggressive dictator, a thug and a bully dismantling a major European country, Ukraine, and the world is going to ring its hands, the administration will cry and threaten and boo hoo hoo, and Putin has already won.

MACCALLUM: And there is nothing, I mean, you said, just a moment ago you suggested that there could be sanctions that would be punishing enough to get him, to change his posture.

PETERS: No, no, I'm not punishing enough to get him changed his posture. No. Putin has never backed down from anybody. He is not a bluffer. And he is trained as a KGB agent handler. He sizes up people well. He has Obama's number and Obama's number is zero. This is a president who talks and does nothing. Putin, did he say oh, I'm going to get Crimea, I'm going into Crimea, better look out. No, he did it. That's how you do it. Fait accompli. And unfortunately, the only powerful leader in Eurasia right now, the only real leader is a horrible, horrible man named Vladimir Putin. And the West has no leader, because the president of the United States, except rhetorically, is absent without leave. It's not that Obama wouldn't like to do something, it's he has no idea on Earth what to do.

MACCALLUM: Colonel Peters, thank you very much. It is a grim picture.