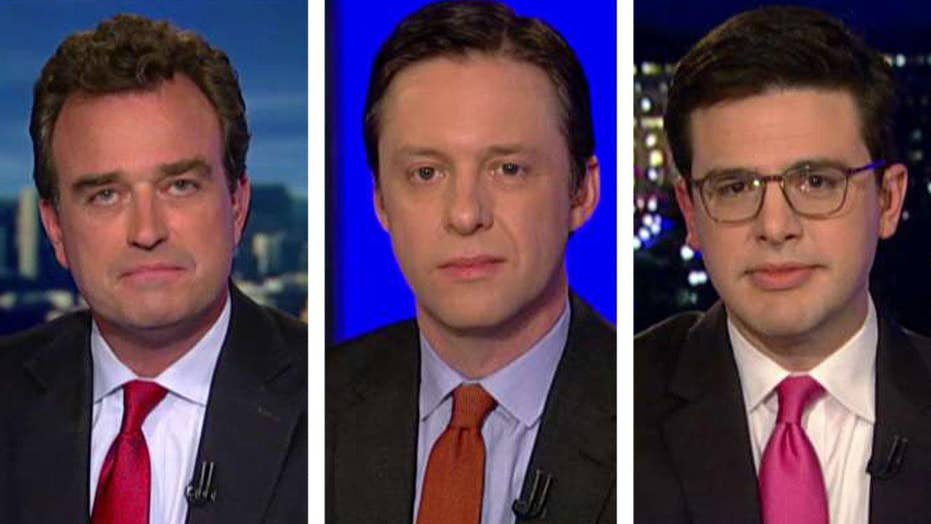 This is a rush transcript from "Special Report with Bret Baier," November 9, 2017. This copy may not be in its final form and may be updated.

PRESIDENT DONALD TRUMP: Both the United States and China will have a more prosperous future if we can achieve a level economic playing field. Right now, unfortunately, it's a very one-sided and unfair one, but, but, I don't blame China.

TRUMP: After all, who can blame a country for being able to take advantage of another country for the benefit of its citizens? I give China great credit.

BRET BAIER, ANCHOR: President Trump talked a lot about China on the campaign trail in the early months of his presidency, talking about it here in Beijing as you look at the trip starting in Japan and then going to South Korea here to Beijing, now President Trump today is off to Vietnam and then the Philippines later.

Let's bring in our panel to talk about that plus tax reform: Charles Hurt, opinion editor for The Washington Times; Matthew Continetti, editor in chief of The Washington Free Beacon, and Michael Crowley, senior foreign affairs correspondent for Politico.

Michael, let me start with you. Your thoughts coming out of Beijing and what the president gains at least what we know from this trip.

MICHAEL CROWLEY, POLITICO: Bret, I don't know if that was a little bit of Confucian wisdom there from the president that you can't blame a country for taking advantage of your country. But boy is it a sharp change in tone from candidate Trump who made China a centerpiece of his campaign rallies, really demonized China, said that China was raping our country, threatened to impose tariffs of up to 45 percent and said he would declare China a currency manipulator on day one.

And now Trump is still talking about an economic imbalance, but as you heard, the tone is much friendlier. He is showering the Chinese president Xi Jinping with complements. And I guess the story behind that is Trump feeling that getting Chinese corporation in trying to rein in the North Korean nuclear program outweighs correcting some of these imbalances in trade that he obviously thinks still persist. And his way of avoiding it being too tense when he brings up that subject is to blame his predecessors for allowing it to happen. But Bret, there is a lot of criticism that the president is not following through on that very tough campaign rhetoric. And it looks like he's going to be leaving China without any big wins on that front.

BAIER: Matt, the Trump administration would say that's what negotiation is all about.

MATTHEW CONTINETTI, WASHINGTON FREE BEACON: That's right, and of course you have to start somewhere. And I do think Michael has a point in that the president is prioritizing national security over the trade and economic nationalist arguments he used to get elected. He's not the first president when confronted with the realities of office to shift his emphasis. And we saw something similar with the Afghanistan decision. Let's not forget as President Trump is traveling to region he has three American aircraft carriers in the Pacific as well. So this is all about reestablishing America's deterrent.

BAIER: All right, let's listen to the president again on these kind of warm, chummy relationship with China.

TRUMP: It's too bad that past administrations allowed it to get so far out of kilter. But we will make it fair, and it will be tremendous for both of us. My feeling toward you is an incredibly warm one. As we said, there is great chemistry. And I think we are going to do tremendous things for both China and for the United States.

BAIER: Charlie, you can see former Iowa governor Branstad next to him, now the ambassador to China. Your thoughts on this change?

CHARLES HURT, WASHINGTON TIMES: I have a bit of a different take on it. I don't think that it's that much, that dramatically of a different approach to this problem. Donald Trump is always very good at playing his audience, whether he is trying to get applause or gasps out of them. When he's on the campaign trail, the China thing is obviously -- they would scream out China like at a Lynyrd Skynyrd concert to play "Free Bird." And he would go into that riff and it was very popular.

But what he was doing, he obviously was going after China, but more than anything he was going after previous leaders when he would go into that riff on the campaign trail. And he would talk about how bad they had been and what terrible negotiators they were and how they have been taken advantage of by China. And so I don't really see that much of a difference with what we are seeing out of him now. Obviously he's a little bit more complementary that he's over there and he kind wants to charm them. He's a very charming guy. But I don't see it as that much of a departure. I think it's just a way of more dramatically making the point that he's always wanted to make.

Corporate tax, the House bill cuts it down to 20 immediately. The Senate bill permanently lowers the corporate tax to 20 with a one-year delay to set it in motion. And then the state and local tax, which is a big one, the House bill eliminates it but preserves property tax deduction for up to $10,000. The Senate bill fully repeals state and local tax deductions.

I wanted to put all that up there on one page, Michael, as a look at the differences and the GOP trying to get this all across the finish line.

CROWLEY: Yes, and it's really not going to be easy. I think there is concern that this is going to be a replay of Obamacare where you would think that this would be almost a kind of a layup for Republicans when they control both chambers of Congress and the presidency. They've looked forward to doing something like this for years. But it's not going to be easy, and particularly now when you see the House and Senate are on different pages, they have to reconcile their two versions, and that's assuming the Senate can even get something through its own chamber.

There are all kinds of complications there including whether the Senate is going to run into some complicated budgeting rules that could raise the threshold for passing this bill having to deal with deficit neutrality going out 10 years. It gets complicated, but the point is, Bret, that after a really tough election night on Tuesday, I think Republicans are more anxious than ever that they don't have a lot of achievements racked up in this first year, and this would be a big one, but it really seems like a uphill fight right now.

CONTINETTI: I think Michael makes a good point in the sense that the elections this week, Bret, have energized Republicans, especially in the House to get something done. I think right now the action remains in the House. Kevin Brady passed the House bill out of his committee just tonight, Thursday. And this is basically going along the calendar that Speaker Ryan had set out some time ago about trying to get the House bill to the floor and passed by the Thanksgiving break. If they're able to do that then I think that does set up Republicans in the Senate to be in a good position to make that final race toward passing a bill by Christmas time.

BAIER: Charlie, there are all these obstacles and complications, but you do get a sense, at least from the leadership, that they are steamrolling ahead.

HURT: Because they have no choice. They're desperate to try to make something happen, to get something done, even if it's not that big of a real accomplishment. But I'm sad to say that I feel like Republicans in Congress have failed to learn the most important lesson from Donald Trump, and that is to keep it simple and cut taxes. And instead what we are seeing, as more of the details come out, it sounds like they are complicating things more than they are simplifying things, and there are people who are going to see their taxes go up instead of going down. That's a disaster. They would be better off -- and there's this still this high probability that they might fail. And if they're going to fail, they may as well go big and try to do something huge and fail on that and won some sort of Pyrrhic victory than this muddling, complicated tax hikes and tax cuts for some people and stuff like that.

BAIER: You guys are just so optimistic back there in Washington. But thank you all, panel.