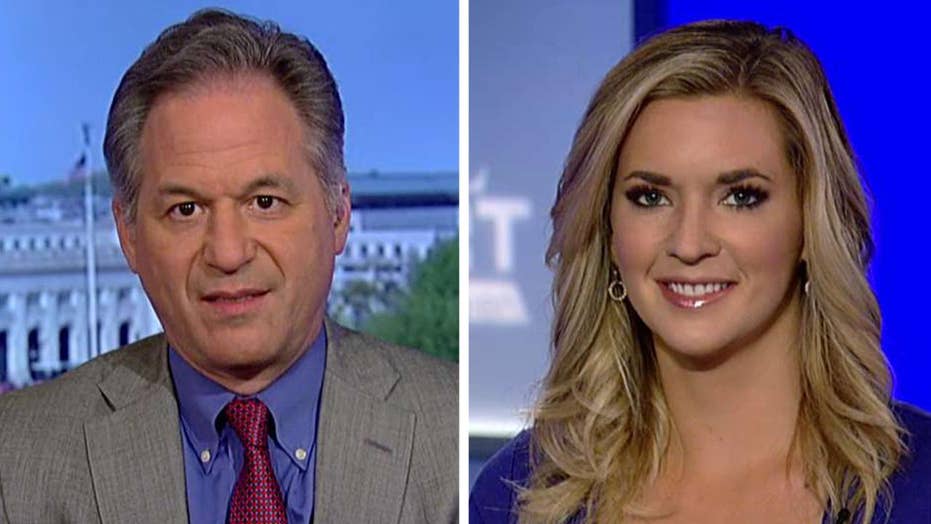 This is a rush transcript from "Special Report with Bret Baier," July 18, 2018. This copy may not be in its final form and may be updated.

PRESIDENT DONALD TRUMP: Thank you very much, no.

UNIDENTIFIED REPORTER: No, you don't believe that to be the case?

SARAH SANDERS, WHITE HOUSE PRESS SECRETARY: The president said thank you very much and was saying no to answering questions.

TRUMP: Well, I would, because he's in charge of the country, just like I consider myself to be responsible for things that happen in this country. So certainly, as the leader of a country, you would have to hold him responsible, yes.

GLOR: What did you say to him?

BRET BAIER, ANCHOR: Putin's very close friend, Dmitry Medvedev. We played that soundbite earlier on the show with President Obama saying he would have more flexibility after the election.

The president weighing in with CBS. It's the third iteration now of the fallout from the Helsinki news conference. Let's bring in our panel: Tom Bevan, Real Clear Politics co-founder and publisher; Katie Pavlich, news editor at Townhall.com; Charles Lane, opinion writer for The Washington Post.

OK, Tom, CBS it seemed most clear what he said behind closed doors and what he says. But it took a little while to get there.

TOM BEVAN, REAL CLEAR POLITICS CO-FOUNDER: Took a little while. Cleanup on aisle three is still going on. And, look, this is part of what has been with Trump. The administration has been pretty strong against Russia. Trump has not, and he's been trying to establish this report with Putin, and he has this sort of glitch about the election, which I think was the initial cause of his flub in Helsinki. And he has spent basically the last three or four days trying to fix that and clean it up. And I think he has now gotten to a position where the administration is strong, but it certainly has cost them with folks on Capitol Hill and probably public opinion as well.

KATIE PAVLICH, NEWS EDITOR, TOWNHALL.COM: There were some questions answered today about what President Trump said to Vladimir Putin in that meeting, what he believes when it comes to Russian modeling, who was responsible. But we also saw in the press briefings today, we've opened up a whole other controversy of questions with Sarah Sanders saying the president has considered allowing the Russian government to interview or interrogate Americans, meaning the former Russian ambassador Michael McFaul, who Vladimir Putin essentially wants dead. We saw that she said that there has been no commitment from the United States to allow that to happen, but we also saw that they are not ruling it out. And then the State Department Spokeswoman Heather Nauert had to come out of say this is absolutely absurd, we are not going to even entertain this idea.

So we have a few answers now on who the president thinks is responsible for the Russian modeling -- Vladimir Putin. But now we have this very serious issue of the consideration at least opening the door to that from the White House podium today about whether American citizens are going to be handed over to Russian operatives for interrogation.

BAIER: Right, and they I think tried to clean that up at the State Department and Heather's statement, and Sarah's statement at the White House was we are going to check it out and see. Chuck, there's a lot of back-and-forth, basically over the premise of what came from the Helsinki news conference.

CHARLES LANE, OPINION WRITER, "WASHINGTON POST": When you stand back and look at this, what strikes you is that the entire mess was, a, avoidable, and, b, entirely of the president's own making. All of this was foreseeable, and he knew these questions were coming. He knew, or should have known, that a certain kind of response out there in Helsinki would trigger this kind of backlash and he kind of went there anyway.

And this is what I think is most distressing to Republicans is that for the first time the president seemed really out of his depth on a big issue on the world scale in a way that jarred Republicans perhaps even all the way down to the Republican base a little bit. And that's why I think he came under so much pressure to hurry up and clean this up and hurry up and start looking strong again because, I repeat, the main thing that was troubling to Republicans, troubling to everybody about that performance in Helsinki, was he looked confused and he looked out of his depth.

BAIER: So as you mentioned, Tom, the administration has been clear, the director of national intelligence that just recently said this about cyberattacks.

DAN COATS, DIRECTOR OF NATIONAL INTELLIGENCE: The warning lights are blinking red again. Today the digital infrastructure that serves this country is literally under attack. Every day foreign actors, the worst offenders being Russia, China, Iran, and North Korea, every day they are penetrating our digital infrastructure and conducting a range of cyber intrusions and attacks against targets in the United States.

BAIER: So when the president tells CBS I told Putin, I let him know we can't have this, we are not going to have it, and that's the way it's going to be, is that going to be the end of this chapter?

BEVAN: Probably not. Maybe he said that to Putin, maybe he didn't. We don't know.

BAIER: Well, the interpreter is being apparently called up to Congress.

BEVAN: Which is crazy to me that the Democrats think that that's an appropriate measure. But nevertheless, and this is part of the problem that Trump has got himself into is you don't know what he said to Putin. You can't necessarily trust what he said because he'll say one thing one day and something else the next day. So I don't think this is the end of it.

And while I said earlier I think this might hurt him in public opinion in the short term, if you go back and look at all the controversies that he's gone through, Charlottesville, et cetera, and still managed to have the highest standing among Republicans of any Republican president in the last half-century, I think this is not something that's going to last. We'll be on to the next controversy. I'm sure it's right around the corner, and this will be in the rearview mirror pretty quickly.

BAIER: Just to be clear, there were many other presidents who've had one- on-one meetings that have just included interpreters. This is not --

BAIER: I've covered a few of them.

PAVLICH: This is not a new phenomenon, right. You have a book about that actually.

BAIER: I wasn't pitching. But, Katie, for Democrats to call for the translator, the interpreter, how does that sit?

PAVLICH: Again, here we have a situation where there are very serious concerns about what happened, and Democrats, again, go too far in assessing the situation, and therefore we can't actually have a conversation moving forward about what to do to fix the problem. If you put politics aside, you put the Russian modeling aside, this is about now rebuilding morale inside the intelligence community. I had people texting me who are conservative Republican Trump supporters yesterday saying I cannot believe that he went out there in Helsinki and did this to us. We feel betrayed, we feel like we can no longer defend this. How do we even talk about this now?

So if you just put the politics aside, this is about the commander-in-chief now having to clean up the mess not on Capitol Hill, not in the communications shop, but with the people who he is leading inside of his administration.

BAIER: And Vice President Pence and we are told Secretary Pompeo made that case, that they could lose intel officials at the top if he did not do that clean up.