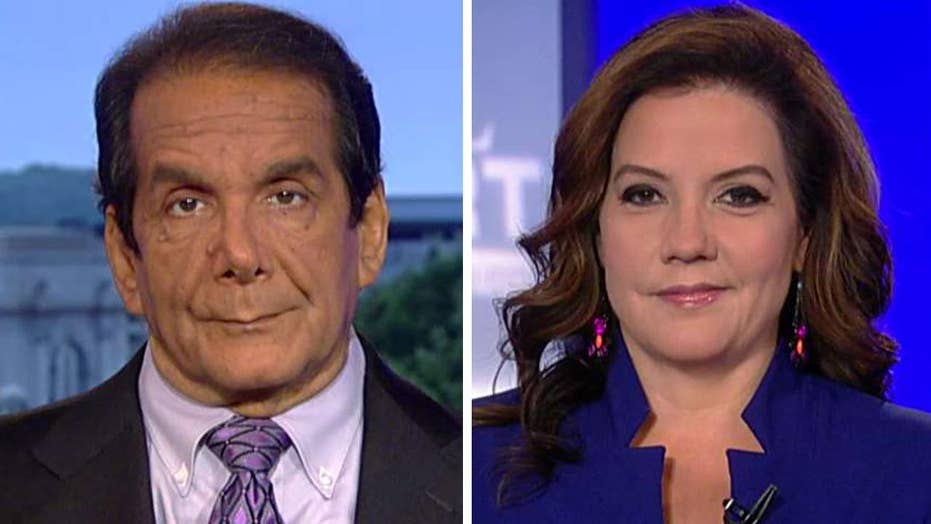 This is a rush transcript from "Special Report with Bret Baier," July 26, 2017. This copy may not be in its final form and may be updated.

THEN-PRESIDENTIAL CANDIDATE DONALD TRUMP: As your president, I will do everything in my power to protect our LGBTQ citizens. There's rarely been a time where we needed the protection of our incredible military more than right now.

SARAH HUCKABEE SANDERS, WHITE HOUSE PRESS SECRETARY: Obviously it is a very difficult decision. It is not a simple one. But the president feels that it is the best one for the military.

REP. SEAN PATRICK MALONEY, D-N.Y.: Today, a president who never served is attacking thousands of heroes who do.

CHAD GRIFFIN, HUMAN RIGHTS CAMPAIGN: It is the latest effort by Donald Trump and Mike Pence to undo our progress and to drag LGBTQ people back into the closet.

BRET BAIER, ANCHOR: Well, the decision took many people by surprise here in Washington, many people at the Pentagon by surprise. It came via Twitter this morning. The president tweeting, "After consultation with my generals and military experts, please be advised the United States government will not accept or allow ..." -- and then there was a pause in the tweets for a little while. Then came this -- "transgender individuals to serve in any capacity in the U.S. military. Our military must be focused on decisive and overwhelming victory and cannot be burdened with the tremendous medical cost and disruption that transgender in the military would entail. Thank you."

And that set off a whole bunch of discussions here in Washington. Let's bring in the panel: Michael Crowley, senior foreign affairs correspondent for Politico; Mollie Hemingway, senior editor at The Federalist, and syndicated columnist Charles Krauthammer. Mollie.

MOLLIE HEMINGWAY, THE FEDERALIST: The job of the military is to fight and win wars, and there are many people who would love to serve in the military who are not allowed where it is because they have eczema or they're too tall or they're too short or they have irregular menstrual cycles or high blood pressure, a list of reasons of people -- for people who can't serve is quite long.

And the actual decision about whether to subject our war fighting capabilities to the ideology of transgenderism is something of a no brainer. This is a very problematic thing to do. It causes redefinitions for the entire military. Right now the guidance is that women must shower with men who retain their full male body parts if they identify as women. That's madness outside of a limited media echo chamber.

BAIER: There are all kinds of questions. Many of them were asked at the White House briefing. This is about troops currently in service.

UNIDENTIFIED MALE: Does that mean that those that are now in theater or are now deployed to Afghanistan, for example, will have to be immediately sent home?

MICHAEL CROWLEY, POLITICO: Well, the Department of Defense wasn't the lead on the rollout and the announcement, and whatever the underlying facts are on the issue itself, certainly this is a chaotic way to present it to the public. And it is not clear how it will be implemented. It's Donald Trump, you know, vintage Donald Trump making policy with tweets, catching people off-guard, definitely some unhappiness at the Pentagon.

I think this is the kind of thing that even if Secretary Mattis would have been on board with, and he had just announced pretty recently a six month review, and I think we're still in the first month of that period of time where he was going to be reviewing this policy, even if he was going to come to the same conclusion, I think it is pretty clear this is not how he would have liked to do it.

But it may be that for Donald Trump this is good politics. You know, it's -- I think that transgender issues are the kind of cultural war flash points that hurt Hillary Clinton and the Democrats in 2016 election, and it is something that I think is probably a winning hand for Trump on the politics even if the roll out is a little chaotic and seat of the pants.

CHARLES KRAUTHAMMER, SYNDICATED COLUMNIST: The roll out and the timing is simply bizarre. I mean, I can understand on a day where one Obamacare reform after another is shot down in the Senate, on a day where the bizarre Twitter war against Attorney General Sessions is continuing and diminishing the president and his own attorney general at the same time, you might want to change the subject. And that is succeeding. We're talking about this. It was the lead and nothing else.

But it came out of nowhere. As Michael indicated, the Defense Department, his own secretary of defense, Mattis is reviewing this, asked for six months, which is reasonable thing for any administration to do, and in the middle of it, was there a crisis that all of a sudden it had to be withdrawn? And you don't release a policy like this and make a reversal without having an answer to the simple questions, such as are you going to withdraw people right now in the field who are transgender. It's like the release of the executive order on immigration where they had no answer on what do you do with the person with the green card and caused that chaos at the airports when the first version of the travel ban was issued. This is not how you run a railroad no matter how you feel about the underlying issue. This is really bizarre.

BAIER: But to put the caveat on there that there were some generals, particularly Marine generals, who had concerns about readiness and impact of all of this, and they talked about it openly. And there was a review. Here is Secretary Mattis before he was secretary being asked by New York Senator Gillibrand about this issue.

SEN. KIRSTEN GILLIBRAND, D-N.Y.: Do you believe that allowing LGBT Americans to serve in the military or women in combat is undermining or lethality?

THEN-DEFENSE SECRETARY NOMINEE JIM MATTIS: Frankly, senator, I've never cared much about two consenting adults and who they go to bed with.

GILLIBRAND: So the answer is no?

MATTIS: Senator, my concern is on the readiness of the force to fight.

BAIER: And that was what the review was about.

There is a Politico piece, Mollie, in which they say numerous House conservatives and defense hawks this week had threatened to derail their own legislation if it did not include prohibition on the Pentagon funding for gender reassignment surgeries, which they deem as a waste of taxpayer money. But GOP leaders were caught in a pinch between those demands and moderate Republicans who felt the proposal was blatantly discriminatory. That's why House lawmakers took the matter to the Trump administration, and when Defense Secretary James Mattis refused to immediately up-end the policy, they went straight to the White House. President Trump, never one for political correctness, was all too happy to oblige," alleging that this was done to save the wall funding and not about the issue.

HEMINGWAY: Well, there are many issues in play here. I would say Mattis did delay the policy, which suggests that he is in line with this change.

I totally agree that there is an arbitrary and capricious angle to the way this was done. At the same time, there is maxim in politics about never giving a bureaucrat a chance to say no, and sometimes just providing some leadership, making some change, actually turning back a bit of this unending attack on certain values that have been happening in the military. I mean, transgender ideology is just one of many social justices that have caused a lot problems for troop cohesion and ability to fight wars, and this is something that is frustrating to a lot of enlisted people and a lot of generals.

BAIER: But it is possible that this policy that was delivered by Twitter is never really implemented, isn't it?

HEMINGWAY: Absolutely, and it is very important to see how it is put forth. And it is true that we need to put things through in a way that everyone is weighing in and giving good, accurate thoughts on it.

CROWLEY: An interesting question here is how much would President Trump really care if it wasn't implemented. How much does he really care about this issue? Or, I think as Charles alluded to, was this tweet a very effective way of changing the subject. We're not talking about Jeff Sessions right now. We're not talking about the Russian investigations. And I think there's evidence that generally speaking the White House is looking to go back to some of those issues that motivated its base in the 2016 election. Culture war is a great issue. Jeff Sessions and Obamacare, not great issues right now. And it may be that President Trump just doesn't feel strongly about this but that he won the day and that's what he wanted.

BAIER: So let me turn that real quickly before we head to break and talk about North Korea and other foreign policy issues. Some people say that the president, Charles, is a master manipulator of the media, a master, and that even on this Sessions issue, as he continues to tweet and everybody is trying to read between the lines, what exactly is he doing, Sessions is not leaving, and yet Democrats who called him a racist and said that they weren't going to vote for him now are stepping up for Sessions. Just take a listen to a couple of examples.

SEN. DICK DURBIN, D-ILL.: It's the wrong person for this job. We need someone one questioned strength, values, and integrity.

Jeff Sessions stuck his neck out for this president. The only, the first senator to endorse him, and now look what the president is doing to him, chopping his head off.

SEN. ANGUS KING, D-MAINE: Because of his relationship with Mr. Trump and his history, I'm just not sure he would give the independent advice that this president desperately needs.

When you take the oath in this country, your oath is to the constitution. You don't say I promise to be loyal and support the president of the United States.

BAIER: Is it possible that this is an effort to create breathing room for Sessions to do what he does?

KRAUTHAMMER: Look, if the subject is the hypocrisy of the Democrats, I think that we should do a full hour special probably once a week for a month. I don't disagree at all. But that's a separate issue from whether the president is wise, to say the least, in carrying on this war against his own attorney general, leaving him to twist in the wind. What does it do to Republicans and conservatives who supported the president in many ways because of the support of Sessions early on? And what is it doing to the president himself? I say it is diminishing him, diminishing his attorney general, and hurting the cause.

BAIER: Just an alternative way to look at it.

What Democrats say is amusing and reinforces the idea that they have absolutely no principles whatsoever. But I would say that is a separate subject.