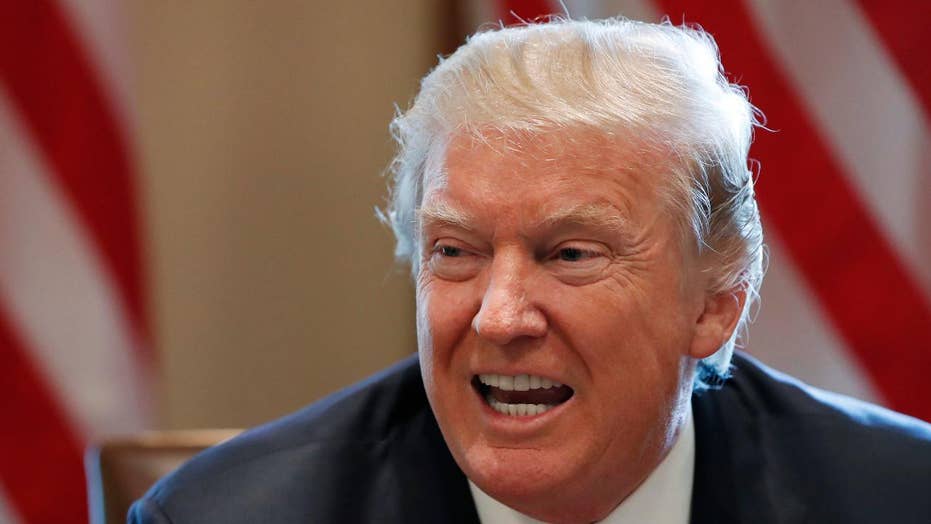 This is a rush transcript from "Special Report with Bret Baier," September 15, 2017. This copy may not be in its final form and may be updated.

PRESIDENT DONALD TRUMP: I want to say that our hearts and prayers go out to the people of London who suffered a vicious terrorist attack today.

America and our allies will never be intimidated. We will defend our people, our nations, and our civilization from all who dare to threaten our way of life. This includes the regime of North Korea.

Our options in addressing this threat are both effective and overwhelming.

THERESA MAY, BRITISH PRIME MINISTER: Clearly this was a device that was intended to cause significant harm. The threat of terrorism that we face is severe. But together, by working together, we will defeat them.

BRET BAIER, ANCHOR: A bomb on a London subway spurning a manhunt tonight to try to find the terrorist behind it. Twenty-nine wounded, no one killed. But Great Britain is on alert. The president tweeting, "Another attack in London by loser terrorists. These are sick, demented people who were in the sights of Scotland Yard. Must be proactive. Loser terrorist must be dealt with in a much tougher manner. The Internet is their main recruitment which we must cut off and use better. The travel ban in the United States should be far larger, tougher, more specific. But stupidly, that would not be politically correct. We have made more progress in the last nine months against ISIS than the Obama administration has made in eight years. Must be proactive and nasty."

The national security adviser thinking -- had to clean up a little bit of these tweets this afternoon.

MATT SCHLAPP, THE HILL: You know, I think that's a little bit -- that tweet, once again, sometimes to know exactly what words are meant, but this goes to the fact that we have terrorists living amongst us, obviously in the U.K., obviously here in America. And this is one of Donald Trump's big themes, which is we are going to root out the terrorists who are here and we're not going to let any more come. And we are going to be as aggressive as we possibly can be. And I think this is another example, another wake up call to the west.

ANNA PALMER, POLITICO: I think actually what was really interesting here was Theresa May and how she responded. She's always careful with her words. She was a genuine slap down. I was talking to my colleagues in London about this. They said that Downing Street was seething about this. What will be very interesting to watch is what happens at the U.N. General Assembly. There is an expectation they will kind of partner together, that there won't be any longstanding harm there, but it's something that certainly all the reporters will be watching.

BAIER: Yes. They had a conversation, President Trump and the British prime minister, Tom. The White House is saying that was very cooperative, and obviously you heard the remarks this afternoon from the president.

TOM ROGAN, THE WASHINGTON EXAMINER: I think what sustains the relationship, though, is frankly what's always sustained it, which is that beyond the values, the intelligence sharing especially is so deep and so integrated and so beneficial to both nations that there is no real interest in allowing disagreement.

There was a disagreement today, that is true, to progress. And I think as you see this plot as the terrorism alert level went up to critical this evening in the U.K., that suggestion of potentially a broader threat here again reinforces why the British will say as much as the Yanks might annoy us, we need their help on these things.

BAIER: Also from that White House press briefing with the U.S. ambassador to the U.N. and the national security adviser, obviously the focus on North Korea. Take a lesson.

AMB. NIKKI HALEY, US AMBASSADOR TO THE UNITED NATIONS: What we are seeing is they continue to be provocative, they continue to be reckless. And at that point, you know, there is not a whole lot the Security Council is going to be able to do from here when you cut 90 percent of the trade and 30 percent of the oil. So having said that, I have no problem kicking it the General Mattis, because I think he has plenty of options.

MCMASTER: For those who have said and commenting about the lack of a military option, there is a military option. It's not what we prefer to do, so what we have to do is call on all nations, call on everyone to do everything we can to address this global problem short of war.

ROGAN: Yes, and I think what you see there, H.R. McMaster is correct. There is a viable military option. It goes, also, into some areas in terms of preventing potential counter-retaliation from the North Koreans. But they don't want to do that. I think what you will see coming up now is increasing pressure on the Chinese in terms of banking institutions that act as cutouts for individuals to help fund the North Korean regime because ultimately, at this point, with the timeline of North Korea encroaching a credible ICBM plus warhead capability, you've got to roll the dice or you've got to use military action. And clearly no one wants to use military action yet.

PALMER: Yes. I think honestly they are not moving back. His words -- you know, he likes to be the strong president. He likes to use aggressive language on Twitter and when he's making statements about this stuff.

But as you see, his administration, his officials often say they want a global response. That was Secretary of State Rex Tillerson today. They are trying to have an approach of caution because nobody wants to go to war right now.

SCHLAPP: Yes, I think this is peculiar to have General McMaster really kind of be forceful about this military option. It seems a bit, almost like in response to what Steve Bannon said either on or off the record in the interview where he said, you know, there's no military option. They seem to be very forceful of this idea of a military option. Then you had Secretary Rex Tillerson say, you know, they are increasingly an aggressive nation. These missiles, they are now within range of Guam, of our military installations. So at what point do we then say they've crossed the line and they are actually being an aggressor? I think this is incredibly dangerous and I would encourage them to continue to say every option is on the table, and there's a lot of good options.

BAIER: Tom, that's a good point. Just very quickly, where is the red line for this administration on North Korea?

ROGAN: I think to some degree they want to make sure they don't do what President Obama did in 2013 and draw a red line they don't enforce. I suspect, though, it is a missile going further out over Japan towards Hawaii. At that point, then we go up toward the next level. And then that gets very complicated --

SCHLAPP: We care about Guam, too. Let's think about this. We care about our allies in the region. It's getting a little silly to say where would that line would be, right, Bret? They have surpassed it.

BAIER: Right. We are going to shoot something down pretty soon, I bet.