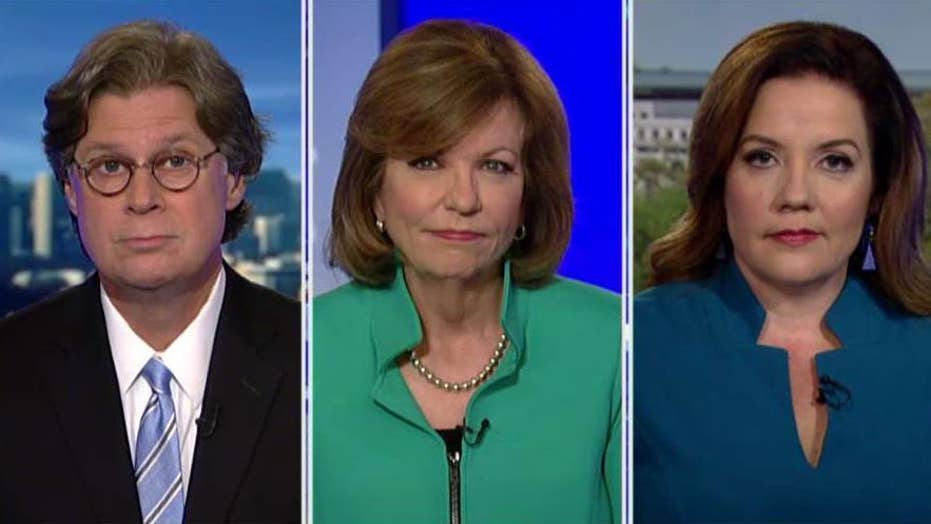 This is a rush transcript from "Special Report with Bret Baier," August 28, 2018. This copy may not be in its final form and may be updated.

DONALD TRUMP, PRESIDENT OF THE UNITED STATES: Google is really taking advantage of a lot of people, and I think that's a very serious thing, that's a very serious charge. They better be careful because you can't do that to people. You can't do it. We have tremendous, we have literally thousands and thousands of complaints coming in, and you just can't do that. so I think that Google and Twitter and Facebook, they're really treading on very, very troubled territory.

NICK ZAKRASEK, GOOGLE PRODUCT MANAGER: The search is not used to set a political agenda, and we don't bias our results towards any political ideology. We continually work to improve Google search and we never rank results to manipulate political sentiment.

BRET BAIER, FOX NEWS HOST: Google was on the mind today here at the White House. The president tweeting out this morning and then talking to the media, saying "Google's search results for "Trump News" shows only the viewing/reporting of fake news media. In other words, they have it rigged for me and others so that almost all stories and news is bad. Fake CNN is prominent. Republican, conservative, and fair media is shut out. Illegal? 96 percent of results on "Trump News" are from national leftwing media, very dangerous. Google and others are suppressing voices of conservatives and hiding information and news that is good. They are controlling what we can and cannot see. This is a very serious situation, will be addressed."

We'll start there with our panel, Byron York, chief political correspondent for the "Washington Examiner," Susan Page, Washington bureau chief at "USA Today," and Mollie Hemingway, senior editor at "The Federalist." Susan, your initial thoughts on this.

SUSAN PAGE, WASHINGTON BUREAU CHIEF, "USA TODAY": I think the problem that President Trump is seeing when he Googles his own name is that mainstream news sources and sources that are often linked by a lot of people come up first in the search. So it's not leftwing news sources. It's the mainstream news sources that people rely on. The analysis by a conservative group that took a fault with the algorithm that Google uses ranked "USA Today" as a leftwing news source, and I can tell you that is not accurate.

MOLLIE HEMINGWAY, SENIOR EDITOR, "THE FEDERALIST": In the same way that you shouldn't just take what President Trump is saying about Google news and how they rank things as the gospel truth, neither should you accept Google's denials, particularly when you have this history of Google admitting that they de-rank based on their own conceptions, editorial conceptions. You have examples of them censoring in other countries. You have them dealing with a lawsuit in their own company, of dealing with their extreme leftwing bias. And they fired employees who were too conservative. You have Eric Schmidt admitting that de-ranking is used to help out some search results over others.

We have a piece up at "The Federalist" that shows that someone who has appeared on Fox News and CNN, his evidence that his Fox News appearances were devalued and his CNN appearances valued higher. So I think there's a lot more that needs to be studied about their algorithms and particularly how when you have a company that has employed almost exclusively progressives or liberals, how that might affect the algorithms that they create.

BAIER: Obviously, as you said, Google is pushing back hard against that. Byron, in the campaign, Donald Trump was listed as the most digitally savvy candidate, and his Google searches and all of his searches were tops. As your president, obviously the volume of stories dealing with a whole range of subjects increases.

BRYON YORK, CHIEF POLITICAL CORRESPONDENT, "WASHINGTON EXAMINER": Some of this is just Trump venting. It's part of his general pushback against the press. But conservatives really have had complaints against the big tech companies in recent years. Facebook has made an outreach to conservatives, talking to them, trying to convince them that their algorithms are fair. The CEO of Twitter has basically said, yes, we are all on the left.

As far as this concern, it's really very, very difficult to see, to tell definitively if these algorithms are biased or what. But I do think one thing will happen here. When the tech companies are under attack either from left or right, they will go to safety. They will start featuring the most mainstream news organizations, "The New York Times," "The Washington Post," which are precisely the news outlets that conservatives accuse of bias. So the problem will continue and we will hear more complaints about this.

BAIER: So down the row, Byron, Susan, Mollie, do you think some regulation on Google or other companies is coming?

YORK: What President Trump says is not the only example of people calling for this sort of regulation. I do think something is on the way in the next few years.

PAGE: I think there will be some more regulation of the big tech companies, although not necessarily because of the complaint that President Trump levied today. There are complaints about privacy, the handling of real fake news by these big tech companies. Yes, I think there is an appetite to try to do more to regulate some aspects of this business.

HEMINGWAY: Big tech companies are extremely worried about deregulation, and the answer of saying private companies can do whatever they want isn't going to be sufficient for a lot of people who think that they are putting too heavy of a hand on the dial particularly when it comes to political discussions and electoral results.

BAIER: We talked yesterday about the NAFTA and the Mexico situation. I want to move on to Bruce Ohr who is testifying behind closed doors on Capitol Hill today, Justice Department official at the center of that infamous Trump dossier, his wife worked for Fusion GPS, talking to lawmakers today. Here is Mark Meadows on Bruce Ohr's testimony.

REP. MARK MEADOWS, R—N.C., CHAIRMAN, HOUSE FREEDOM CAUCUS: Not only did the FBI know that the dossier was unverified, but they also knew that there were real credibility issues where it would never end up in a courtroom. Bruce Ohr worked for the department of justice since 1991, and never in his entire history was anything handled in the way that this was handled.

BAIER: Setting that up, Meadows tweeted "We've learned new information suggesting our suspicions are true. FBI, DOJ have previously leaked info to the press and then used those same press stories as a separate source to justify FISA's unreal. Tomorrow's Bruce Ohr interview is even more critical. Did he ever do this."

Mollie, we're hearing he had a lot of lack of memory in this testimony, but we'll see where this goes.

HEMINGWAY: We're hearing the testimony contradicting the sworn testimony of other players in this drama. We don't know what happened because it was behind closed doors, but unfortunately that previous hearing with Peter Strzok was such a clown show that I think that people figured they needed it to be behind closed doors in order to get information. That comes at the expense of transparency for the American public.

What we are hearing is that he did admit that he was profiting from Fusion GPS. That was the firm that employed his wife to the tune of $44,000 while funneling information from Fusion GPS that was this Hillary Clinton concocted dossier of Russia conclusion. And as people have noted, this is a very unorthodox. This is not the way it people traditionally handle the investigation. He ostensibly had nothing to do with the investigation while he was funneling this information. So I think we have a lot of questions we need answered.

BAIER: Susan, what are the chances that Bruce Ohr stays on at the Justice Department after all this and the president's focus?

PAGE: What are the chances Jeff Sessions stays on at the Justice Department after all this? I don't know whether Bruce Ohr will stay in the Justice Department or not. And Congress certainly has a right and an obligation to pursue investigations as they see fit, but I would just note that we should remember the dossier was not the launching point for the Russia probe. George Papadopoulos talking at a London bar to an Australian diplomat was the launching point for this investigation. I think that's a fact that we should not lose sight of.

YORK: I think Representative Meadows was saying the FBI knew about these problems with Michael Steele and the dossier, that Steele was desperate to get Donald Trump. I think they probably knew that because Bruce Ohr told them. And I think that what will come out of this is that the FBI knew well about the problems with Christopher Steele and his biases, even when it first applied for a FISA warrant to spy on Carter Page.

BAIER: And per our earlier conversation, "The Washington Post" tonight saying that the president vented twice, saying he might fire Sessions just in the past couple of weeks. We'll see where that goes.

Next up, the primaries and the midterms to come, plus one state that could throw everything up in the air.