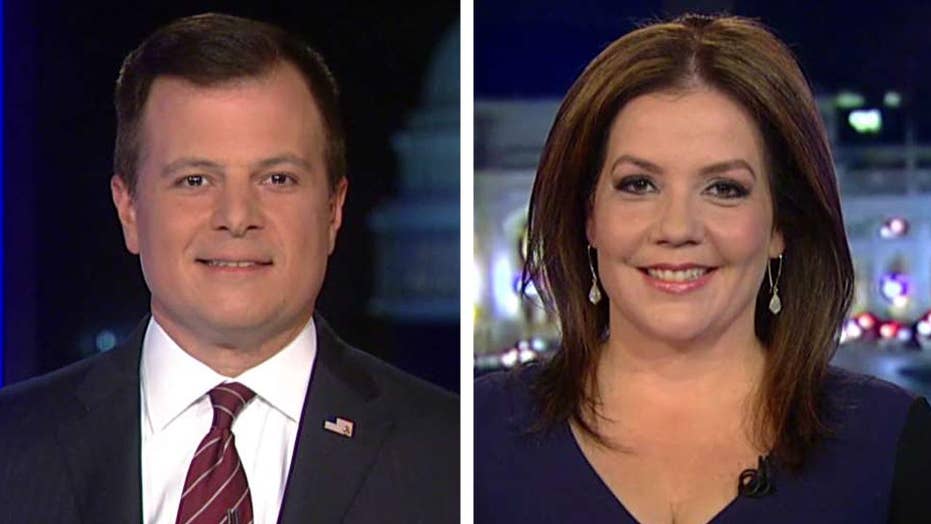 Trump takes a presidential victory lap after his first year

This is a rush transcript from "Special Report with Bret Baier," December 28, 2017. This copy may not be in its final form and may be updated.

PRESIDENT DONALD TRUMP: So the country is really a big, big beautiful ship that we're turning around.

It's time to exit the Paris Accord.

The war on coal.

We don't want to forget DACA.

The rogue regime in Iran.

Christmas is back bigger and better than ever before.

MIKE EMANUEL, FOX NEWS: It has been quite a year. Let's bring in our panel: Daniel Halper, contributing editor to the Washington Free Beacon; Amy Walter, national editor for The Cook Political Report, and Mollie Hemingway, senior editor at The Federalist. Ladies, gentleman, good to see you. Mollie, your thoughts, first-year highlights?

MOLLIE HEMINGWAY, THE FEDERALIST: It was a good year for President Trump. A rough year, but he ended really strongly with the tax reform and tax cuts. I think a lot of people didn't think he could accomplish this. He's a political neophyte. He did it with a very slim majority in the Senate and with a media establishment that was content to not really be that truthful about what was in the bill. So that's really good.

On foreign policy he took a new direction from what we've been accustomed to with the previous couple of presidents and actually managed to crush ISIS. It's not that he had a totally different strategy than President Obama, but he enabled his military to actually make the decisions and be accountable and do what they needed to do to get it done. He saw a lot of success there that we didn't see under the previous administration.

EMANUEL: Amy, did you notice a learning curve as the year went on, and what are your observations of year one?

AMY WALTER, COOK POLITICAL REPORT: Certainly I think by the time we got to the tax bill, the relationship between the president and Congress had gotten a little more balanced. It was obviously a little rocky during ObamaCare. But I also think that was the issue set. I think it's a lot easier to get Republicans on the same page on tax cuts than it is on something like ObamaCare and its many different facets, including Medicaid.

Look, if you go through the list of accomplishments, many of which you included in the package here, the president fulfilled a lot of the things he said he was going to do on the campaign trail. The challenge right now for the president and his party is that voters at least at this point are not giving credit to the Republicans. They don't see him particularly positively. They don't see the Republicans in Congress in a popular light. If you look at just where voters think they want to be in the 2018 election, Democrats have a double digit lead at this point.

So given all the accomplishments and how well the economy is doing, the real question is why isn't the president or the party doing better? And a lot of that is for, as much as he's succeeding in keeping his base energized, he's double energizing the opposition. And swing voters, a lot of these things that are appealing to conservatives aren't necessarily appealing to swing voters. The big challenge I think for 2018 is Republicans selling their most major piece of legislation, which is the tax bill.

EMANUEL: You mentioned the economy. We have some handy dandy graphics we can show you about economic changes this year. Real GDP growth, unemployment rate, consumer confidence all improving between January and now. And then look at the Dow milestones. Look at the curve at that. Anybody with a 401(k) at home certainly recognizes the impact in terms of the surging Dow. We'll see if that continues into the new year or whether we see if it has a reversal. Daniel is one of the keys looking ahead perhaps that voters feel like they're getting something from the tax cut, they see that in their paycheck every week?

DANIEL HALPER, WASHINGTON FREE BEACON: Sure, obviously I think that would help, right, if people actually can feel the benefits of it. I think that does help in many ways.

Look, President Trump so far has been the most conservative president in the first year of my lifetime, which might not say that much, but it is what it is. But I think the problem is many of his accomplishments have not yet been lasting. So he has a Supreme Court justice. He has reshaped in many ways the judicial system with a lot of nominees in lower courts helped along by the Senate. And of course he's had this tax reform package.

But a lot of the other changes have been basically rollbacks of President Obama, which conservatives rightfully cheer and they celebrate, but it doesn't mean that the next president has to abide by that. The next president can come back in and resign a lot of these things and go back to where president had. So unless he can get Congress, unless he can get legislative accomplishments, I think how we judge the -- in terms of substantive policy of this administration, how we judge that I think is still up in the air.

EMANUEL: Because as we saw with President Obama, the pen and the phone didn't have lasting effect unless the pen was writing on permanent legislation.

WALTER: And I think I that is a very important point to pick up on in terms of the rollback versus the new stuff. Plus the president has made this presidency, the first year of his presidency really about himself. And voters are really also seeing that this presidency has been much more about his personality than about the policies. In fact, if you look at polling where they ask people both who like him and don't like him, what it is they do or don't do about him, the number one thing that comes up are aspects of his personality and his temperament. That wasn't true for Barack. They picked Obama's policies. I don't like ObamaCare, I don't like foreign policy.

HEMINGWAY: It was true that Obama's presidency was also very much about him and it worked out for the Democratic Party writ large. That is a challenge for Republicans is to figure out how to work with this president, how to make sure that their success is also tied to his. I think this tax reform and the tax cuts really showed a way for that Tea Party element, the more populist element to work with the establishment Republicans. If they can do more of those successes working together, they might both benefit.

EMANUEL: And my sense is that with a Supreme Court justice being approved, if there's another Supreme Court opening at some point that that would be something that his base could get very excited about.

At the same time it's also true that some of these regulatory changes really are far-reaching. Dismantling the clean power plan, the Paris Accord and all that bureaucratic stuff that goes along with that, had that not happened you would have really gone down in one direction with environmental regulation overreach. That didn't happen. And so I think some of these things are more long lasting than people realize even though they're just repeals of things Obama did.

EMANUEL: We've seen a fair amount of personnel shuffle in the first year. We will see if that continues into the second year or whether things stabilize a bit at the White House and throughout the Trump administration.