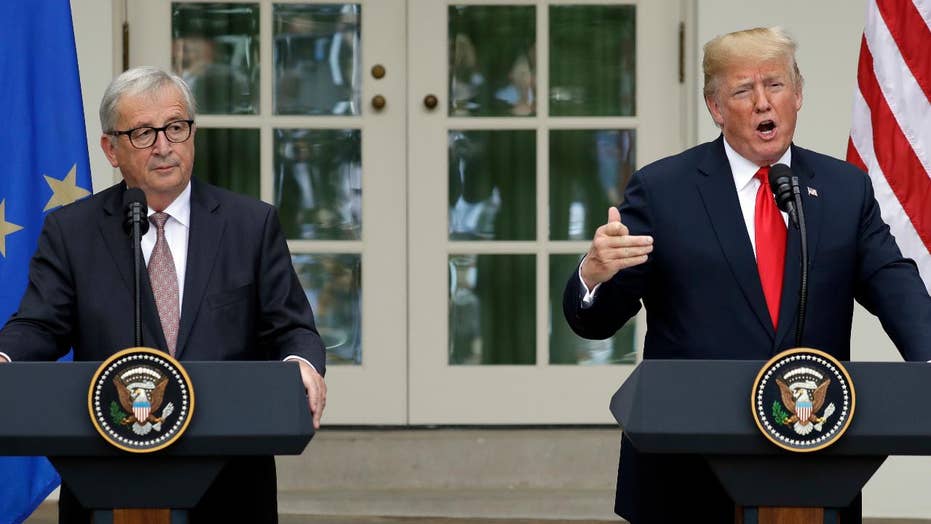 'Special Report' All-Stars on the trade framework with the European Union.

This is a rush transcript from "Special Report with Bret Baier," July 25, 2018. This copy may not be in its final form and may be updated.

PRESIDENT DONALD TRUMP: This was a very big day for free and fair trade. We agreed today, first of all, to work together towards zero tariffs. The European Union is going to start almost immediately to buy a lot of soybeans.

JEAN-CLAUDE JUNCKER, EUROPEAN COMMISSION PRESIDENT: I had the intention to make a deal today, and we made a deal today. We have identified a number of areas in which to work together, work towards zero tariffs on industrial goods.

BRET BAIER, ANCHOR: The president with a surprise announcement in the Rose Garden with the E.U., trying to get to zero tariffs, but they have struck a deal, and that could change some dynamics at least. You heard the secretary of commerce earlier on the show.

Let's bring in our panel: Charles Hurt, opinion editor for The Washington Times; Amy Walter, national editor for the Cook Political Report, and Tom Rogan, commentary writer for the Washington Examiner. Amy, clearly this White House is feeling and hearing from Republican lawmakers and farmers in the Midwest. This seems like at least one check on the board to kind of move the relief.

AMY WALTER, COOK POLITICAL REPORT: I thought that was a really good piece that you played about one of the farmers saying I don't know if this is going to come in time, I don't know what I was supposed to be planting, I don't know if this is an election ploy, what are we supposed to do. And so it's pretty clear that the White House getting that message both in the package that they announced the other day, the $12 billion or bailout for these farmers, and then an agreement to make an agreement about something in the E.U., and the president of course hyping the word "soybeans" a lot.

When we first heard about the E.U., what most people were waiting to hear about one's auto tariffs. Instead we heard a lot about soybeans, which suggests that the real focus is on the farm belt much more than on the E.U., or the rustbelt.

CHARLES HURT, WASHINGTON TIMES: I thought it was interesting when you asked Wilbur Ross about China operating on a different calendar. That's to put it lately. They operate on a far different calendar. They look at things in terms of tens and even 100 years out, whereas the United States, the politicians really haven't been doing that at all.

I think Donald Trump ran his campaign very much with a very much big picture thing, talking about free trade, talking about the problems with free trade, something that both parties had sort of ignored. Both parties embraced the idea that free trade is great for everybody. Well, it's not great for everybody. And I think the fact that Donald Trump was able to get some concessions out of the E.U. today, or at least an admission that there are some disparities there that can be fixed, that's a real win for him.

BAIER: Talking to the secretary, saying that they are trying to get to zero, and he mentioned this at the G-7. It was kind of blown over by everything else he said at the G-7, but your thoughts on this today?

TOM ROGAN, WASHINGTON EXAMINER: It was really striking, isn't it, that the secretary says it goes further, it goes to President Trump's aspiration here is to be the most free-trade president you could have with the E.U. But I think the reason you could see that being potential is unlike, for example, China, where the wage cost calculation that takes away American jobs the president would say. With the E.U. it has high-value jobs, high cost jobs, so there isn't that prospective loss. And at the same time in terms of various industries where it's the flow from both sides of the Atlantic, there it is the idea there that you could have an alignment.

So I also think China will be very concerned with this kind of rhetoric coming from the two today, because what China really does not want to have is an alignment between the European Union and the United States with them both going to Beijing saying stop taking our IP.

BAIER: Meanwhile, Great Britain is on its way out of the E.U., or at least planning to, and they might be holding it back.

Up on Capitol Hill, Secretary Pompeo in some heated exchanges with senators about that Helsinki summit.

MENENDEZ: Mr. Secretary, with all due respect, I don't appreciate you characterizing my questions. My questions are to get to the truth.

BAIER: So one half of the questions went like that.

WALTER: What a surprise. That's so unlike any of these hearings in Washington.

I think it goes really to the heart of the challenge -- I don't know who's challenge it is, for the administration and also for Senator Menendez there, but there are positions and policies that the administration has taken on Russia that pretty hard and pretty hardline and aggressive, and then there are the president's words. And which one are you supposed to be focusing on? The president is the spokesperson for the United States of America. What he says has incredible influence. Policy matters too, but when you sort of boil it down, if the president's words aren't matching up with the policy, then where does that leave --

WALTER: It is absolutely the Trump administration policy with the president getting very different --

BAIER: Today before this hearing Secretary Pompeo saying that the U.S. is not recognizing Crimea as a Russia territory. Remember, this is different than the Obama administration, which said we are not going to stand for this, and suddenly they had a different time zone and new passports.

HURT: Amy is exactly right. It is a sort of words versus actions thing, and the actions, as is often the case with Donald Trump, sometimes he says things that -- different people take different ways. But the actions are I think the important thing here.

But it was fun fireworks watching Pompeo's spar with Menendez and others. But at the end of the day of course the president of the United States can meet with foreign leaders privately, and of course he is allowed to have a secretary of state with whom he has conversations that are kept protected.

BAIER: Meanwhile Bolton saying -- Putin is not coming to Washington until the witch hunt is over, that was his specific words, but until the Mueller probe is finished.

ROGAN: I think there is a concern that Congressional Republicans did not want that summit to happen before the midterms, but I think also there is this broader understanding in the White House, at least with the advisors to the president, that if you can nail down some of the tangibles in terms of Syria going forwards to test the Russians out before the summit, that is a better way to go.

I did think it was interesting on the Hill, today, as much as we talk about the president's rhetoric as a problem on Russia, Secretary Pompeo at one point saying he was being challenged by Democrats on what the Russian defense ministry is saying about the leader of Central Command, and he said why are you trusting what the Russians are saying? He was playing their own game at them and they didn't quite know what to do with that. So it's interesting, this wordplay.

WALTER: I don't know that we can get any more out of that tape. The question is how many more tapes are there? There are supposedly a dozen tapes, we don't know if the president is on any of those. And who is leaking them and how many more -- is this the most salacious, or are there more to come?

HURT: It's been a year and a half since Donald Trump sent that tweet that blew the world up about how Trump Tower was tapped. We knew the DOJ had tapped at least somebody in there, and little did we know his private lawyer was doing it, too. I think the question is Cohen, did he make that recording in good faith or was he trying -- one thing I can assure you, I don't think CNN is doing much to preserve the evidence.