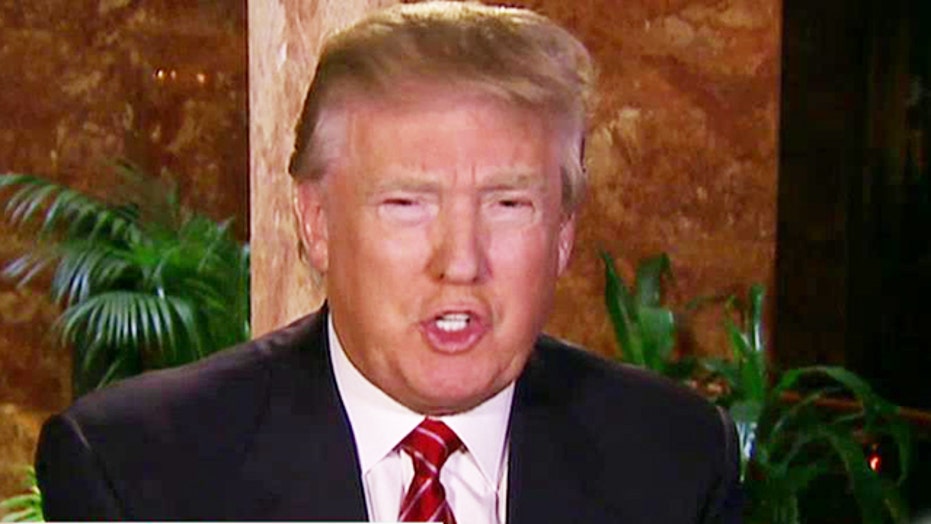 Trump: Our leaders just don't have 'it'

This is a rush transcript from "Your World," April 15, 2015. This copy may not be in its final form and may be updated.

NEIL CAVUTO, HOST: Do you ever look around Washington, folks, and just think, you know, you're fired, you're all fired?

Well, I can't say it as well as this next guy. But if I'm hearing the rumor mill correctly, he just might be going to Washington or looking to do that.

Donald Trump with me right now.

Donald, very good to have you. Thanks for coming.

CAVUTO: Are you done with your taxes?

TRUMP: Well, you pay the taxes. It's very complicated. I spend a fortune on people to prepare them. Frankly, it would be nice to get rid of everybody and just have either a fair tax, a flat tax or certainly a simplified code.

But it's a very, very expensive proposition. And we're also the highest tax nation in the world. We're number one in taxation, but it's too complicated and it takes too long.

CAVUTO: All right. So, I take it from that you do not use TurboTax or a program like that yourself. There's a SWAT team of accountants helping you out.

TRUMP: And it's very -- it's a very long process and it's a very expensive process. That I can tell you.

TRUMP: And it shouldn't be.

And that gets to the core of the problem, whether guys like -- billionaires like you or average folks who themselves need some help, whether through an accountant or organization like H&R Block or what have you, what has happened over the years to the tax code to make it this complicated? And what would you do to simplify it?

And in the end, it gets to be so expensive and the rates keep going up, and at one time they were higher, and now they're a little bit lower, but then they get increased again. And it's just a very, very complicated thing and you need an I.Q. of about 180 to figure it out.

And people can't figure it out. It would be nice to put all these preparers out of business, to be honest with you, because that's what should happen. We will see that what happens. But a fair tax or a flat tax or somebody -- in Europe, they do the VAT tax, which actually is pretty simple, based on consumption, and it does simplify things a lot. It's got its big advantages, some disadvantages.

CAVUTO: Yes, but it's done in conjunction with income taxes, you know?

And, you know, we have another tax called real estate taxes.

TRUMP: You add it all up, I'll tell you, a guy like me, the real estate taxes I pay, forget it. That goes to lots of other things, some of which is to supposed to be paid by the income tax.

CAVUTO: Now, all the major Republican candidates, even those considering it, have put out simplified tax plans of their own, Marco Rubio probably the most prominently, with a two-tier tax plan. I think he has a 15 and 35 percent rate.

He generally takes all investment-related taxes away. What do you think of something like that, that kind of approach?

TRUMP: It works because it does simplify things. And a thing like that would work.

But we will see what happens. I think probably nothing is going to happen in Washington. The problem with Washington, the politicians are all talk, no action. They do nothing. They just talk. They have been talking about this for 25 years. As far back as I can remember, they don't get it done. They talk, but they get nothing done.

CAVUTO: For years, Donald, you have talked, some would say teased, about running for president. But I read an article recently that a confidant, whose name they didn't quote, said that Trump is getting bored. He's tired. His company is on fire. He's doing fine. He's serious. When he talks about wanting to run for president, this guy seemed to think you were serious.

TRUMP: Well, I built a great company in a relatively short period of time. It's a tremendous company, some of the great assets of the world in the world of real estate and other things.

And I'm tired and just sick and tired seeing the way the country is run. You look at the Iran deal, the recent Iran deal. It's a total travesty what we're -- the people that we are negotiating that are representing us on something like that. It's sort of Bergdahl, 5-1. You know what we get? We get Bergdahl, and they get five killers who are there trying to do big damage.

Now, what I'm asking you, is it enough at this point, unlike four years ago, unlike eight years ago, where you're saying, you know what, damn it, this time, I'm going to do it, I'm going to run?

TRUMP: Well, I looked at it very seriously four years ago. And, you know, I came very close. And, unfortunately, Mitt didn't do the job. He didn't get the deal closed. And I'm looking at it extremely seriously.

I have done a lot of things that I have never done before. I have a very big staff of people, as you know, in Iowa, in North -- in South Carolina. We have a lot of people in New Hampshire. I'm going up there this weekend, so we will see.

CAVUTO: Well, then let me ask you this. You're also a pretty savvy businessman. And you know, when you run for public office, your financial life is an open book.

Are you willing to show that to the world to save the world?

TRUMP: I have already done it. I'm probably the only person that ever was going to run and thinking about running. Last time, as you know, I gave a full financial statement. I'm very proud of my company.

I actually gave it four years ago. And, boy, that really shut everyone up. CAVUTO: Yes. But you know what this is like, Donald.

TRUMP: They couldn't believe how good it was, how strong it was. Now it's much better.

CAVUTO: But that's different. This is like a full-body cavity search when they -- when you're running for president. They go through everything.

TRUMP: It's all right.

CAVUTO: They're going to through -- you're OK with that?

TRUMP: It's all right.

TRUMP: I have been a very public person. I think I have probably been the most public businessman there is.

But I did a filing four years ago. And it was a fantastic filing. Everybody said, wow, we had no idea he built that great of a company. And now it's much better. And I'm in a position. My children are old enough.

TRUMP: I would do -- yes, I would self-fund. I don't need anybody's money. I don't need money from lobbyists, who basically -- you talk about the tax code.

Part of the reason the tax code is so screwed up is because you have the lobbyists all lobbying for their clients. I don't need any lobbyists. I do it myself. And believe me, you would have a simplified tax code as one of the many things you could do in a Trump administration. So, if I run, a lot of good things would happen.

If I run and win, this country would be great again. That, I can tell you, Neil.

CAVUTO: You would be the first guy elected though who would not move into the White House because it's smaller than the house you presently have.

CAVUTO: Will it have a residence? Well, there you go. All right.

TRUMP: I could actually stay right there. Well, I could build one very easily, save a lot of money.

CAVUTO: Donald Trump, keep us posted, because I'm believing all these rumors here that there's something percolating there.

TRUMP: I will. I will. Thank you very much, Neil.

CAVUTO: All right, be well.