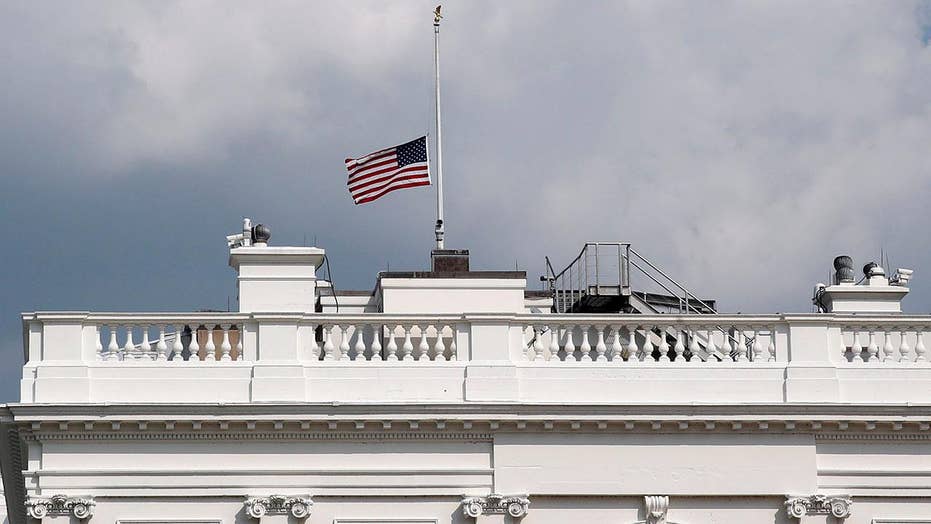 President Trump issues statement noting his respect for Senator John McCain's service to the nation; reaction and analysis from the 'Special Report' All-Stars.

This is a rush transcript from "Special Report with Bret Baier," August 27, 2018. This copy may not be in its final form and may be updated.

JOHN MCCAIN, FORMER ARIZONA SENATOR: As you well know, I've been called a maverick, someone who marches to the beat of his own drum.

I was a candidate for the highest office in the country I love so much, and tonight I remain her servant. That is blessing enough for anyone.

It is an honor to serve the American people in your company. Thank you, fellow senators.

RICK DAVIS, FORMER MCCAIN ADVISER: Do not despair of our present difficulties. We believe always in the promise and greatness of America, because nothing is inevitable here. Americans never quit, we never surrender, we never hide from history. We make history.

BRET BAIER, ANCHOR: The voice of Rick Davis, former campaign manager for John McCain, reading a letter that McCain wrote before he died, read today in Arizona. This as there was a little controversy today about flags at the White House, whether they were half-staff or not. It started Sunday, then Monday the flag went back up, and then by Monday afternoon after some hubbub, it came back down after an order was issued.

The president putting out a statement after being asked numerous times to comment, he did not, then put out, issued a statement, "Despite our differences on policy and politics, I respect Senator John McCain's service to our country and in his honor have signed a proclamation to fly the flag of the United States at half-staff until the day of his interment. I have asked Vice President Mike Pence to offer an address at the ceremony honoring Senator McCain at the United States' Capitol this Friday.

At the request of the McCain family I have also authorized military transportation of Senator McCain's remains from Arizona to Washington, D.C., military pallbearers and a band support, and a horse and caisson transport during the service at the United States Naval Academy.

Our friend Amy Walter just tweeted, "The amount of attention national media is paying to the Trump snub of McCain is disproportionate by a degree of 10 the amount voters care about this issue."

So let's bring in our panel: Tom Rogan, commentary writer for the Washington Examiner; Mollie Hemingway, senior editor at The Federalist; and Charles Lane, opinion writer for The Washington Post. Chuck?

CHARLES LANE, WASHINGTON POST: It is, whatever the kerfuffle may be about the flag and so forth today, it is nevertheless the fact that the bad blood between President Trump and John McCain has outlived the latter, and that is to say that the relationship between the two of them was very, very chilly, and really began with gratuitous slaps that then candidate took to disparage John McCain's war record.

The president, though, I don't think was doing that out of nowhere or in a personal -- it was personal, but it wasn't only meant personally. The president is really trying to remake this Republican party ideologically away from many of the things John McCain represented, in particular a compromise on immigration, the internationalism on foreign policy, and so there was always that connection between the policy and the personal.

And of course in his last month on earth, Senator McCain issued a number of statements through his book and otherwise making clear that he wanted his vision to carry on after him.

MOLLIE HEMINGWAY, THE FEDERALIST: It is nice to see a return to some type of decorum in politics where we remember people for what they are, what is their best moments and the best moments of their career. And with Senator John McCain there so much that is admirable and so much good, beginning with his patriotism and service to the country. This is a man who showed true courage in compact and also as a prisoner of war. And it is great to see so many people, whether they were ideological photos or otherwise, take a step back from politics and honor this man and try and emulate some of his patriotism and love of country.

I think it is worth noting that the McCain family had, or Senator McCain had requested President Trump not be at the funeral. And that is a very reasonable request for him to make. I think that what you see from the White House is an attempt partially to not be involved too much in the very appropriate ceremonies that are going to taking place here. And for once it is very good to see President Trump not to make this be about him, and I think he is trying to show some respect and distance from the family during this time as well.

BAIER: Yes. Obviously, it took a long time to get the statement this afternoon, but they eventually got there to this detailed statement. This is the Senate floor, the Senate majority leader and minority leader today.

SENATE MAJORITY LEADER MITCH MCCONNELL, R-KY.: America will miss her devoted son, her stalwart champion, her elder statesman. I will miss one of the very finest gentlemen with whom I've had the honor to serve.

SENATE MINORITY LEADER CHUCK SCHUMER, D-N.Y.: He was equally parts funny and furious, foulmouthed and statesmanlike. He could put the temper in temperament. He was a brave and honest man. He was a patriot.

TOM ROGAN, THE WASHINGTON EXAMINER: I think whatever the personal animus between the president and John McCain, it was I think gratifying to see the president back down there, quite noticeably, and take the right moral stand. I think the country is better for that.

One of the things, though, as we look back at John McCain's legacy is wherever he stands on those various policy issues, a lot of disagreement obviously with his vote on health care, the fact of how America's traditional adversaries have responded, and to a rule, whatever we think about the Iraq war, they are gratified that he is gone. And I think that John McCain might say that that is the best measure of his service to this country, that he can say actually the enemies are happy I'm gone, but my legacy lives on. And it lives on in his family as well.

BAIER: We will have a lot of coverage as the ceremonies continue throughout the week.

I want to turn now to the trade situation. We had the U.S. trade representative Lighthizer on the show earlier. Today's deal was about Mexico and moving forward and reconfiguring NAFTA. But he said it is much bigger than that on this show.

ROBERT LIGHTHIZER, U.S. TRADE REPRESENTATIVE: The fundamental problems in the United States is China. We have a very, very unbalanced situation, and we have $375 billion worth of trade. We have lost millions of jobs because of Chinese practices which I believe are unfair, uneconomic. So we have to figure out a way to change the relationship with China.

BAIER: He wasn't shy about it, Chuck. This was all a big picture about China. The specific deal points in the NAFTA every renegotiation, he says are good for the U.S.

LANE: There are a number of connections between this and China. Let's try and break them apart.

The first is sort of a tangible one, which the domestic content rules are being tightened so that Chinese inputs for the auto industry don't leak through Mexico tariff free into the North American market. He says that is addressed in the deal. And the second connection is that what seems to have happened is the Trump administration finally organized itself to start putting out the trade wars it started with friendlier countries like the European Union and now perhaps -- South Korea before and now perhaps Mexico so that it could focus on China, and indeed perhaps have some support from those allies, which means the next step in this is going to be crucial, which is getting Canada to buy into it so that you can then have that united North American front again. And I must say, it's still quite unclear as to how exactly that is going to work out.

BAIER: Although it seems that Canada is really anxious to get in the negotiations now having Mexico sign, or at least agree in principle to a deal.

HEMINGWAY: The tune has changed quite a bit from Canada. And this is a profoundly vindicating day for the Trumps administration which has put forth a strategy that a lot people thought was risky and they were very worried about it, putting the squeeze on tariffs, trying to renegotiate a bunch of trade agreements. President Trump obviously prefers bilateral trade agreements over these multinational things that were quite popular for a few decades.

But this is a good agreement. Taking one of the things that was mentioned by Ambassador Lighthizer that 40 to 45 percent of goods going into automobiles need to be made by people who are making at least $16 an hour. There was no requirement on how much people needed to be paid in Mexico when they were making these parts. That we like to call NAFTA a free-trade agreement, but it is really a very complex situation. And renegotiating some of those rules to be more favorable is a good thing.

ROGAN: Very quickly. I think the interesting issue, the European Commission pretty optimistic on both sides, the White House optimistic, so we're going to see movement there. I think to Mollie's point, yes, there is that momentum. I wonder what will happen with the health insurance though. Mexico, obviously that makes it slightly a get around with the $16. And on China, I think positively you see this pressure. Intellectual property, that's the key. And President Xi in China now under his own pressure. So President Trump looks good on this.

BAIER: Yes. We will see what happens with Canada, we will follow all of the developments, plus the president-elect of Mexico coming soon into power.