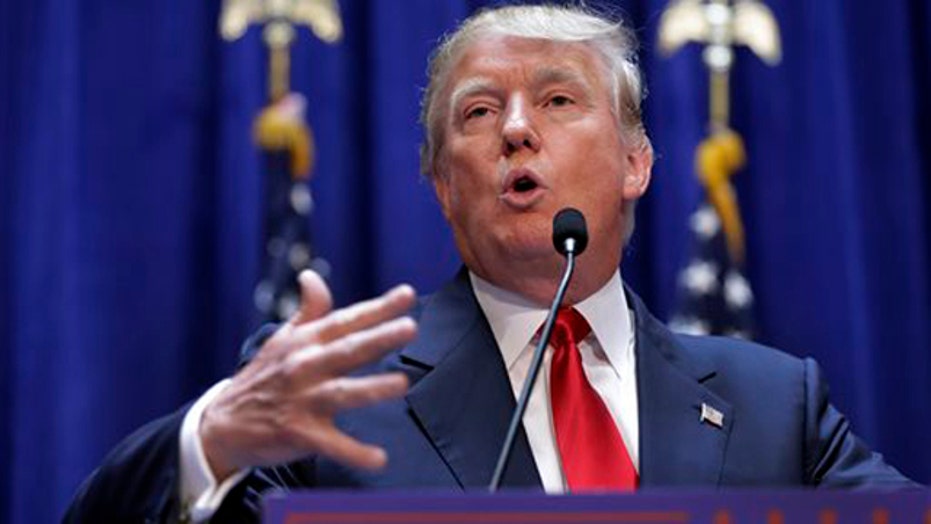 Trump: Macy's 'weak, under pressure,' I gave them an out

Uncut: Donald Trump has no malice towards Macy's for ending their relationship, but hates the fact the country's become so PC about Mexico instead of doing 'the right thing.' Plus, he's confident in his $500M lawsuit against Univision over Miss USA

This is a rush transcript from "On the Record," July 1, 2015. This copy may not be in its final form and may be updated.

And just hours before that tweet, the Donald's clothing line terminated. Trump's controversial immigration remarks sparking a fire storm from his corporate partners. First, Univision cutting all ties. And NBC jumping ship. Both putting the telecast of his beauty pageants in jeopardy.

Trump is not taking this lying down, filing lawsuits. But as some of his corporate partners bail, presidential candidate, Donald Trump, is standing firm as his poll numbers continue to climb.

Moments ago, Donald Trump going ON THE RECORD.

VAN SUSTEREN: Donald, nice to talk to you.

VAN SUSTEREN: Donald, lots going on with you today. Who moved first? You dumped Macy's or Macy's jumped you?

TRUMP: I heard pressure was put on Macy's. And I spoke to them about it and I don't want them to have pressure. I've known them very well. We've had a good relationship. It's a small business. It's ties basically and some shirts. But it's a small business. But pressure was put on them. They do not handle pressure well. I'm very strong in favor of the -- we have to stop it actually, the illegal immigrants pouring through our borders. I'm very, very strong on border control and border security. And they probably aren't. I'm strong on making great trade deals with other countries and, I guess, Macy's probably isn't. They were folding like a bunch of bandits. Frankly, I said let's end it. I said that to them last night.

I think it's a mutual thing, but I maybe I sort of gave them the out. There's pressure being put on them by certain groups. These groups that go around -- I guess they -- I don't know, maybe they make a living doing this stuff. But, you know, I'm OK with it. I have nothing against Macy's.

I don't like the fact people are trying to be so politically correct that they don't do the right thing, however, Greta.

VAN SUSTEREN: Do you wish you had a do-over on what you said your announcement day or do you stand by it still, the statements and the way you said it?

TRUMP: No, what I said is very simple. I would love to say I will change it. But I'm talking illegal immigrants are pouring into our country. With that, comes tremendous crime. I have said that. Other people have said it.

By the way, the Department of Homeland Security has said it. Border Patrol said it. Look at the stories with the tremendous amounts -- it's a crime wave. Somebody has to say it. I know it's not nice to say or politically correction. Unfortunately, I'm in a position where, if a Macy's canceling my tie, it has no impact on me. It doesn't have any impact. But, the truth is, you have to be able -- somebody has to stick up to this country and say it.

Frankly, I appreciated Ted Cruz backing me. I really respected that. A lot of people have -- look, you see it in the polls. People are backing me. Somebody has to stick up for our country on trade. We are getting ripped off by China, Mexico, Japan, by everybody, everybody that does business with us. So, honestly, it's like, I don't think I could have been more clear. We have to stop illegal immigration into our country. We have to strengthen our borders.

VAN SUSTEREN: But, I'm reading every day when I wake up, whether on Twitter or the new, there's something is going on with Donald Trump. Another person is saying, no, they're canceling you. Now the latest is you are going to lose a judge from the contest, Emmitt Smith, former NFL player. He says now, because of what you said, he's out of the pageant business with you.

TRUMP: Who cares? I don't care if he's with the pageant business. I mean, what difference does it make --

VAN SUSTEREN: He was a judge.

TRUMP: Who cares? So what? We'll get other judges. Judges are easy to get.

It's interesting, NBC left and Univision, which I'm suing for $500 million, and that's a good lawsuit, by the way, because I'm very good with contracts. But what they did terrible because they left 51 wonderful young women sitting stranded in Louisiana, in Baton Rouge. And I said, you know what, I'm putting the show on. So, I'm putting the show on. I'm going to go to the show. But they left these wonderful 51 people stranded. They could have waited a week and they could have had the show. But NBC chickened out because they're weak. That's the problem with our country. Nobody wants --

TRUMP: Nobody wants to do what's right. They want to do what's politically expedient. And it's sad. And that's why we have so many difficulties.

VAN SUSTEREN: Donald, you have been talking about it for a long time. The products like the ties you sold in Macy's, they were made in China.

TRUMP: Greta, I talked about that --

VAN SUSTEREN: Why not be a leader?

TRUMP: I tell you what -- I thought I was. One of the things, if you look at the announcement, one of the reasons I said, let's give it up, is because I felt very uncomfortable having ties made in China. The reason they are made in China is because they manipulates their currency to such an extent that people in the United States cannot compete with China. We don't have a leader that even knows what it means to say currency manipulation. So between China and Japan and so many other countries, including Mexico, by the way, which is doing a tremendous number on us. Now, I have to say, I have great love for the Mexican people and the spirit of the Mexican people. I have respect for Mexico. I'm not angry at Mexico. I'm angry at our country for being so stupid in trade their negotiations with Mexico, China and Japan, and everybody that does business with us.