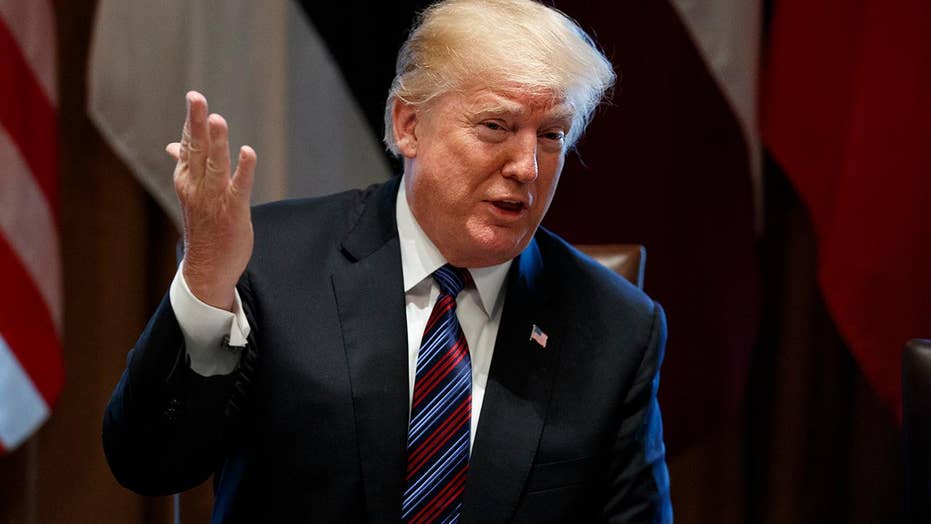 This is a rush transcript from "Special Report with Bret Baier," April 5, 2018. This copy may not be in its final form and may be updated.

PRESIDENT DONALD TRUMP: We're going to have our wall and we are going to get a very strongly. The military is going to be building some of it.

So we are working out systems now and we called out the National Guard, but I will tell you what, the laws of this country have to be strengthened and toughened up.

We have the more normalized drug problem, and a lot of that comes through the southern border, and that is one of the other reasons we are being very strong with the National Guard and with the wall.

We have the worst laws. You think catch and release, which we are terminating very quickly. We are doing it in pieces.

TRUMP: We are working very hard on NAFTA. We get it done right, or we'll terminate it.

BRET BAIER, ANCHOR: President Trump in West Virginia touting his tax law but also talking about immigration, the wall, and what he's doing along the border. This is the border state governors, four of them, Greg Abbott in Texas, Susana Martinez in New Mexico, Doug Ducey in Arizona, Jerry Brown in California, as you can imagine, three of those four pretty keen on the moves, one of them from California not so much at least so far.

And governor of Oregon, tweeting out, Governor Kate Brown, if the president asks me to deploy Oregon Guard troops to the Mexican border, I would say no. As commander of Oregon's Guard I am deeply troubled by Trump's plan to militarize our border. So far, no request for Oregon National Guard members.

BAIER: You've dealt with a little bit of this protecting the border issue. Your thoughts on the National Guard talk, the moves, and what lies ahead for this president.

ROVE: Two presidents have deployed the guard. President Bush did, it was 6,000 Guardsman in 2006 to 2008, two-and-a-half years roughly. President Obama did it with about 1,200. President Trump is facing a situation. If you talk to the border patrol people, they are worried about the trend this year versus last. Essentially there have been a doubling of the number of people that they have intercepted at the border, and versus last year.

ROVE: Right. And so they want to have some additional support at the border.

But let's be clear, when you send the guard to the border, they cannot protect the border in the way that you think a border patrolman does. They can't arrest people. They basically are logistical. They free up people inside the border patrol to actually go and, if you will, stand on the border and intercept people. They provide air assets. They do some of the backroom operation in terms of detention.

They literally -- we had people in 2006-08 who were the dog handlers, so those dogs you see at the checkpoints, they were the people in the backroom dealing with the dogs so that there could be more border patrolmen who could actually arrest people. Under law, literally laws going back to 1807, the Insurrection Act of 1807, Posse Comitatus Act of 1878, the 1918 National Guard Act, National Guardsmen cannot arrest people. So they are going to be support, logistics, aviation, construction, but they're not going to be the people actually intercepting and arresting.

MARA LIASSON, NATIONAL PUBLIC RADIO: It's interesting. Other presidents have used the Guard in exactly the way Karl described, and they've described it that way. President Trump said we're going to send the military to the border, he made it sound a lot more dramatic, as if the military was going to be literally doing those functions. But it is something that has precedent. I don't think it is a huge deal, 2,000 to 4,000 is what the president said today aboard Air Force One.

I think he's on shakier ground when he says he's going to change all these laws that lead to the catch and release situation, unlikely he is going to get that. But he can tell his supporters that he is now doing something about the border.

BAIER: And politically that is what this is about, is it's not so much firing at the base but really talking about an issue that he campaigned on.

SWAN: Oh, yes. He sat there and he was watching this network and seeing people that he usually sees say very nice things about him turning on him on some of the shows. And it really freaked him out. And so that was one part of it.

And the other part of it is the way he sees it, and this has been described to me come from a person I talked to, is he just wrote in his mind, he just wrote James Mattis at the DOD a really big check, really, really big check in his $700 billion. Can't you spare 25 for the wall? Obviously there are statutes that stop that and this is where the problem gets in. But in his mind, can't they just pay some of this money for the wall?

ROVE: There is also, though, a very real problem. If you talk to people in ICE and talk to people on the border patrol, there's a very real problem with the law. In 2000 there was a thing called the trafficking victims protection act, reauthorized several times, 2003, 2005, 2008, 2013. In 2008 there was some language inserted in there. It took the coyotes who bring these people from Central America a little bit of time to figure out how to exploit it, but there is a weakness in the law that allows, let's say we have got a family with children. The family and the children both show off the border. The family separates itself, comes across the border, gets picked up. They are called OTMs, Other Than Mexicans. Immigration lingo is really bizarre.

But the OTMs then get swept up. The child comes across, they are an unaccompanied minor, they get swept up. And then the family gets released because of certain defects in the law. And the child then can be released to their custody and they are all here in the United States. And the coyotes have figured out how to monetize this, get people to pay them to bring them up, bring them across the border, and this is a problem that does need to be solved.

BAIER: And not only that, the trial situation and the judges dealing with 700 days.

LIASSON: They have to let them go, and sometimes they don't come back for a court date, as he's complained about.

But partly it's the anger about the omnibus. This is the first time President Trump ever did anything that angered his base like that. But also, he goes back to immigration like a touchstone issue. Today in that event in West Virginia, he reminded everyone what he said when he came down the escalator when he announced his campaign. He talked about rapists then, he talked about rapists today. This is an issue he is going to return to throughout this entire campaign.

BAIER: Is it a winner?

LIASSON: He thinks it is.

ROVE: He thinks it is with his base. I'm not sure it's a winner with the overall population. But Mara is right. He spent 24 minutes before he finally said I'm discarding my remarks. He talked I counted 11 different subjects, five of which had to do with immigration. So he's returning to it

BAIER: I want to turn subjects. And this is a press spokesman and the president on the future of the EPA administrator.

HOGAN GIDLEY, WHITE HOUSE DEPUTY PRESS SECRETARY: I can't speak to the future of Scott Pruitt. I can just talk about where we are now, and that is that the White House is aware of these reports.

TRUMP: I think that Scott has done a fantastic job. I think he's a fantastic person. I just love coal and energy. They love Scott Pruitt.

BAIER: They are two sides. First of all, they are sending mixed messages both publicly and privately. But the two sides are he has from their point of view policy-wise been an effective advocate for the president's agenda. But two is the signals they send privately that all the headlines have really gotten to them.

SWAN: Right. And I even in the last hour have been told not to read too much into that statement by the president. I think more than anything he is deferring action.

He's in a bit of a box here because unlike Rex Tillerson, unlike Shulkin at V.A. who the conservatives had no love for, a lot of conservatives love Scott Pruitt. And you saw there. Trump knows that. And Pruitt's allies are calling in, and he's been very aggressive on the deregulatory agenda.

And the other thing they are saying to him is don't let the left have the victory. Don't give them the scalp because they'll never stop. That is what they are telling Trump. And that resonates with Trump. However, no one in the White House believes that this is the left's fault. They believe that Scott Pruitt is to blame for these stories. They're very frustrated with him. And Pruitt, I'm told, has assured John Kelly that there is no more ethical missteps to come. So I believe if there is major stuff, bad facts to come, it is really probably untenable.

BAIER: It wasn't his best interview with Ed Henry.

LIASSON: Certainly not. The White House officials thinks there are more to come about his personal behavior. And they were on a tear yesterday communicating privately that he was on really thin ice. And the box that Jonathan talked about, yes, he is supported by the conservatives, although anybody who was President Trump's EPA director would carry out his agenda. On the other hand is, Trump's brand is I'm going to drain the swamp. And Pruitt is tarnishing that brand.

ROVE: That would be relief to them.

BAIER: And some elections coming up.