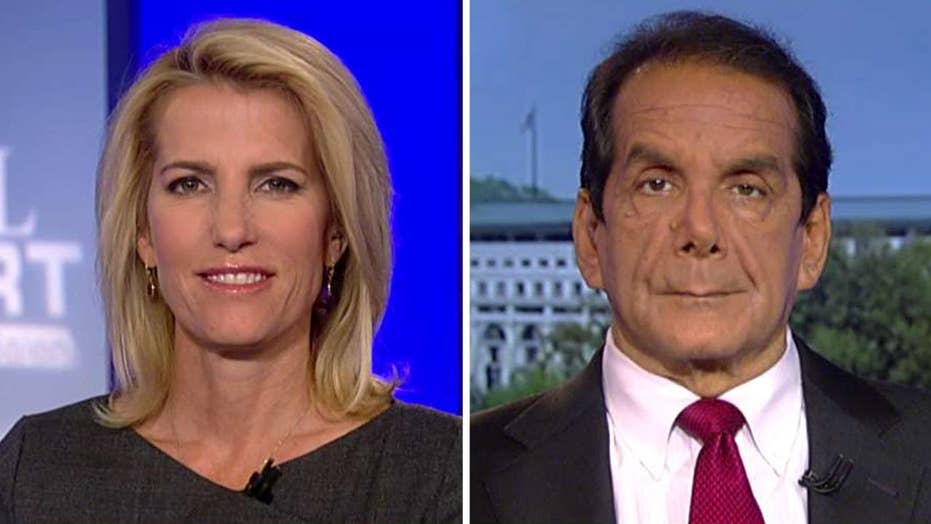 This is a rush transcript from "Special Report with Bret Baier," August 15, 2017. This copy may not be in its final form and may be updated.

PRESIDENT DONALD TRUMP: This week it's Robert E. Lee. I noticed that "Stonewall" Jackson is coming down. I wonder, is it George Washington next week and is it Thomas Jefferson the week after? You really do have to ask yourself, where does it stop?

BILL HEMMER, FOX NEWS: That from the lobby of the Trump Tower earlier today. We should say late this afternoon, a surprise question-and-answer segment there with President Donald Trump. It was an infrastructure event that was quickly -- it was overridden with questions about Virginia and the clarifications that came after that, the explanations, the questions, and on and on it goes.

We want to bring in our panel right now: editor in chief of Lifezette, Laura Ingraham, and from the A.P. bureau Julie Pace, White House correspondent for the Associated Press, and syndicated columnist Charles Krauthammer. Good evening to all of you.

I have plenty of question and answer that I'll get to in a moment. But Julie, as a reporter, just lay down the bare facts for how this came about today. Why today, what's the back story on that about 4:30 this afternoon?

JULIE PACE, ASSOCIATED PRESS: The president was planning to go to the lobby of Trump Tower to talk about infrastructure. He was flanked by members of his cabinet, and we had been told, journalists that been told that he was not going to take questions, that he was simply going to make a statement.

And then this was really Trump's decision. He decided at the end of his statement that he wanted to take questions. And aides said afterwards, again, it was his decision to take questions and his decision, most importantly, to revert back to his initial statements on the violence that we saw around the University of Virginia over the weekend.

And I think what this clarified is that the cleanup effort yesterday that was largely driven by advisers of the president trying to get him to get ahead of the criticism and get past that criticism, he was an unwilling player and that the statements that we heard from him today doubled down and really reiterated the initial comments that he had that this was a problem on both sides of these protests.

HEMMER: Laura, what did you think? Was he defending, was he explaining? How did you hear it?

LAURA INGRAHAM, LIFEZETTE.COM: I always like to think about it this way. Is he advancing his agenda with what happened this afternoon? I will say when you had Gary Cohn up there talking about they're going to hit the ground running on tax reform. We're ready, we spent the whole day. I wanted to hear more and more and more. That's great.

And we got sidetracked on this horrific event of the weekend which he had made the subsequent statement about that was, I think, really, really good. I think he could have been more specific clearly on Saturday, but when he said we it must love each other, show affection for each other, unite together and condemn the hatred, bigotry of the violence that we saw, that was so great yesterday.

I think today he is really torched about people conflating Trump support with white nationalists. You can see it and hear it in his responses, and I understand that. But he's not there to win every debating point. People want to see a calm president in the storm. I think today, I think he made some points that were factually right. There was violence on both sides in that event on Saturday. Anyone who watched the video could see it.

But he's not there to win every point. He is there to calmly guide the nation through what at the moment is a very troubled time, and advance an agenda of economic empowerment, streamlining regulations, and keeping very optimistic and positive about the American spirit. When he does that I think it's really positive. Today I think he got caught in the pundit trap, like he became a pundit. And what I think people want is Trump the president. When he does that he's really powerful.

CHARLES KRAUTHAMMER, SYNDICATED COLUMNIST: To critique what he did today on the grounds that it distracts from the agenda or was a tactical mistake I believe is a copout. What Trump did today was a moral disgrace. What he did is he reverted back to where he was on Saturday and made it very clear that what he read on Sunday was it Monday, two days later --

KRAUTHAMMER: -- was a hostage tape, clearly reading off a prompter, saying these denunciations by name of the KKK, et cetera. That wasn't Trump speaking. That was the aides speaking.

The reason it's a moral disgrace is this. This generation for the last 50, 60 years, all the modern presidents, you can go all the way back, Woodrow Wilson was exempt, but beyond that understood there was something unique about the history of slavery and racism in this country that we had to cure this original sin. It was not cured by the Civil War, as Lincoln had hoped, because it was followed by 100 years of state-sponsored oppression. It began to be cured with civil rights, equality of rights, and this generation, the last 50 or so years has done a splendid job in redeeming itself.

What Trump is missing here is the uniqueness of white supremacy, KKK, Nazism. Yes, there were bad guys on both sides. That's not the point. This was instigated, instituted, the riots began over a Nazi riot, a Nazi rally, and the only killing here occurred by one of the pro-Nazi, pro-KKK people.

HEMMER: But if you're looking for nuance from this president, he's not going to give you nuance.

KRAUTHAMMER: I am not asking for nuance.

HEMMER: He's not going to explain to you that some were legally and you may not like what they are saying, and it's hate speech and you can disagree with it, but we fought and died for it. It's protected --

INGRAHAM: "Racism is evil. Those who engage in violence are criminals and thugs." I guess what Charles just said is Donald Trump doesn't mean that. If you are going to say Donald Trump is a racist or he's stupid or he is some dumb troglodyte who is doing a hostage tape, I guess you can tell our FOX viewers that. And I resent what you said it was a copout what I said on this set.

To critique what he did today is what we were asked to do on this show tonight. I'm not going to pass moral judgment on whether Donald Trump is morally on the same plain as you are, Charles. I'm sure you are a better person than he is. He had a moment today where he could have been calm and could have gone through the facts of what happened again if necessary and address the issue of the day which is to get this infrastructure going in this country. Getting caught in the trap of the left, which is what the media wants us to do, is not going to help a single black person get a job, a single Hispanic person have a better life. We have to be honest about the evil of racism and also honest about the evil of the far left that is trying to tear down both history and intimidate free speech in the country. That is not defending neo-Nazis, it's not defending white supremacists. It's stating a fact about anti-fa.

KRAUTHAMMER: I never said he was defending neo-Nazis. The point is we are not discussing jobs here. We are not discussing an agenda here. We are discussing the unique role of a president of speaking for the moral conscience of a country going all the way back to Abraham Lincoln. We're not comparing him to me. We're comparing him to his great predecessors and to the modern predecessors who, on occasions like this, would rise to the occasion, speak on behalf of Americans, and denounce unequivocally --

INGRAHAM: He did that.

KRAUTHAMMER: Yes, but then he tempered it all today. He undid all that by saying, oh yes, he did it reading a statement yesterday, but what he really meant is there was anger, violence, evil on both sides.

KRAUTHAMMER: That is missing the point of what occurred here.

HEMMER: Your position is leave the statement as it was made on Monday?

INGRAHAM: I think his statement yesterday was clear and strong, and it was compassionate. I think he should have said it on Saturday. I have no idea why he didn't.

But what's going on in the media. It's not about the statues. It's not about people being offended by the statues. It's about power and control. What's going on with the debate in this country -- people drive by the statues every day. Most people don't even know what's on the statues. But now it's become a symbol. OK, tear down all statues, take them all down. That's what he said today. Now what? Are we going to put people back to work? Great. But white supremacy, evil, violence, evil. The murder, terrorism, what happened to that poor woman, evil. He's called it all out, but it will never be enough for the people who despise him and his agenda. And there are people on the right and people on the left who do not want him to succeed no matter what. Did he make tactical mistakes? Yes he did.

INGRAHAM: You can read a heart. You really are a PhD.

KRAUTHAMMER: What he said yesterday was what he was reading off a prompter. He was not asked to do the press conference. His staff was shocked that he went into this. The reason he did it, he has a point to make, and he made it very plain to the country that what he believes in what he feels is what he said on Saturday and not what he read two days later.