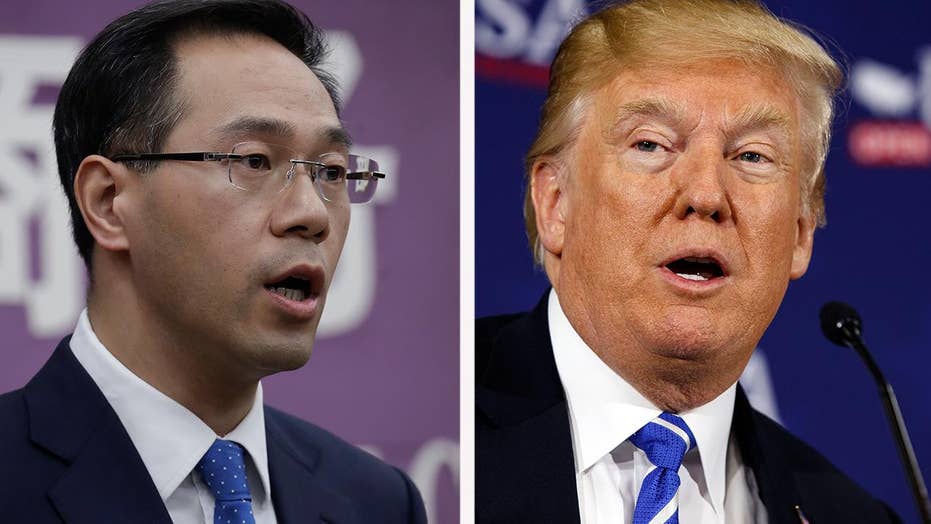 This is a rush transcript from "Special Report with Bret Baier," April 6, 2018. This copy may not be in its final form and may be updated.

STEVEN MNUCHIN, TREASURY SECRETARY: We are willing to continue negotiations. On the other hand, the president is absolutely prepared to defend our center.

GAO FENG, CHINESE COMMERCE MINISTRY (through translator): We do not want to fight, but we are not afraid to fight a trade war. China will fight back for sure. China will respond in a new and comprehensive way.

SARAH SANDERS, WHITE HOUSE PRESS SECRETARY: We are focused on the long- term economic principles. Let's be clear, the tariffs that we're talking about with China have not been implemented and are months away.

TRUMP: So we may take a hit. You know what, ultimately we're going to be much stronger for it.

BRET BAIER, ANCHOR: Well, what is going to happen if these tariffs, the new ones are put into place and China retaliates? The Dow a little shaky on this question today, it's assumed, dealing with this, as you look at the falloff, about 760, got some back at the end of the trading day. The president has been very open about this. He's been tweeting about it. We pay attention to a lot of his tweets. This is actually a retweet of his own tweet. So we do pay special attention to this one.

"We are not in a trade war with China. That war was lost many years ago by the foolish or incompetent people who represented the U.S. Now we have a trade deficit of $500 billion a year with intelligence property theft another $300 billion. We cannot let this continue." Double tweeted that one.

Let's bring in our panel: Jonah Goldberg, senior editor at National Review; Charles Lane, opinion writer for The Washington Post; and Charles Hurt, opinion editor for The Washington Times. Charlie, thoughts where this is headed and if it's a collision course we are looking at?

CHARLES HURT, THE WASHINGTON TIMES: It's certainly not something we have seen around Washington for a very long time. But the president is right about this. If you look back at the past 20, 30 years, we have been in a sort of war with China, an economic war, whether it's textiles or furniture. They steal our intellectual property as well as our designs and things like that. They have been eating our lunch for a very long time. And it's something politicians in both parties have paid lip service to and campaigned on, trying to do something about.

And this is a guy who, and we can all debate about whether this is the right way to do it and we don't know whether he will succeed, but at the end of the day, this is something that he won the election promising to do something about, and obviously no politician would ever embark on a fight like this a few months before a midterm election. But this guy is not a regular politician.

BAIER: Larry Kudlow in his new job has been talking about tariffs. Take a listen.

LARRY KUDLOW, NATIONAL ECONOMIC COUNCIL DIRECTOR: Tariff hikes are prosperity killers. They always have been and they always will be. If you lower tariffs and lower barriers and open markets and clearly follow the laws with respect to technology stealing, this will be good for everybody. My point is, tariffs enter the picture. Negotiations enter the picture. The WTO enters the picture. You follow? And you've just got to walk through this process, and we'll see hopefully this will have a very happy ending.

BAIER: You follow? This is a negotiation, he says, Chuck, and he'll be on FOX News Sunday this weekend. He's been on several shows kind of laying this out, saying it's not a done deal yet. This is part of the negotiation.

CHARLES LANE, THE WASHINGTON POST: Well, what your heard Larry Kudlow saying there in a vague way was more or less the line of American industry itself, particularly the high-tech industries, who are very annoyed with China. They are getting hurt by China, but they fear a total blow up. What they are asking of the Trump administration is to treat the end game here as one in which the goal is to bring China back into the WTO compliance, not what the president says, which is to get China to decrease its bilateral deficit to the United States. So in a way Larry Kudlow there is articulating the view of mainstream America business, but I'm not sure that is the view of the president. I think the president is fixated on the bilateral trade deficit. I think he feels that in a way we have the upper hand because since we import so more we can put more tariffs on more stuff.

And there is a negotiation going on. It's not like will there be one. And the question is going to be will the president accept what China seems to be prepared to offer which is a lower tariff on our cars and maybe some of their semiconductor market in return for calling off these tariffs, or does he want something more.

BAIER: Jonah, the signals from China, and you talk to people who know China well, suggest that they just want to know what Trump wants from them. They are so confused it seems that it's almost like they're off their game.

JONAH GOLDBERG, NATIONAL REVIEW: I think that's right. And I am not sure it's necessarily an advantage. I think a lot of things need to be separated out.

The intellectual property theft is a real problem, and that's needs to be done about it, and American business need to be scolded for their complicity in this. They complain about it but they go along with it when they go over to China because they want to be part of those markets. But this announcing of these tariffs now is kind of like that scene in "The Usual Suspects" where Keyser Soze kills he own family before he even tries to negotiate. We could have gone to the WTO a year and a half ago at the beginning of this and filed complaints against a China that we were really aggressive on a multilateral line. And the fact is we are not all that compliant with the WTO either, but China actually has a much deeper interest in staying in the good graces with the WTO, and they tend to actually comply with that stuff. Instead we've gone straight to threatening the trade war part without actually working on this.

And when I listen to poor Larry, I love Larry Kudlow, I've known Larry Kudlow for 25 years, he's in the position of trying to make this a rational thing about negotiations, about intellectual property theft, but Donald Trump has for 30 years said that he cares about the bilateral trade stuff. It used to be Japan and now it's China and he just has a different economic view of this stuff.

BAIER: But let's put the Keyser Soze away, but if shaking up the pot like he did on North Korea changes the dynamic, is that a bad thing?

All right, let me turn to Russia. Listen to the White House press secretary.

MERCEDES SCHLAPP, WHITE HOUSE STRATEGIST COMMUNICATIONS DIRECTOR: What we all want at the end is a good relationship with Russia when it comes to being able to have a stabilized region. But that of course would include that Russia does not move forward with bad behavior.

SANDERS: We are going to continue working forward in what we can to have that meeting and have a meeting with Vladimir Putin at some point.

BAIER: The Russian embassy putting out a statement in reaction to these new sanctions, "Washington has delivered yet another blow on the Russian- U.S. relations. Now, the sanctions cover captains of Russian business who refuse to play to Washington's scenario. The United States has made yet another erroneous step to destroy the freedom of enterprise and competition, to impair integration processes in the global economy." That's kind of a wordy statement from the Russian embassy, but the bottom line for all the talk, this administration is pretty tough on Russia now.

HURT: Yes, and it's kind of unfortunate that it's taken this long, but I think a big reason for that is it's so early on this whole issue about Russian meddling in the election became so highly politicized and it turned into a partisan thing where it really probably shouldn't have been nearly as partisan as it is. And quite frankly, I think the lion's share of the blame for that lies at people who have turned this Russia thing any way that they can smear Donald Trump.

LANE: What strikes me about this is the sweeping nature, the tough nature of the condemnation of Russian behavior. They are not specifying that it's because of the poisoning in London or anything like that. It's Russia is generally creating mischief in the world, and that is a big statement, that is a big new orientation in foreign policy.