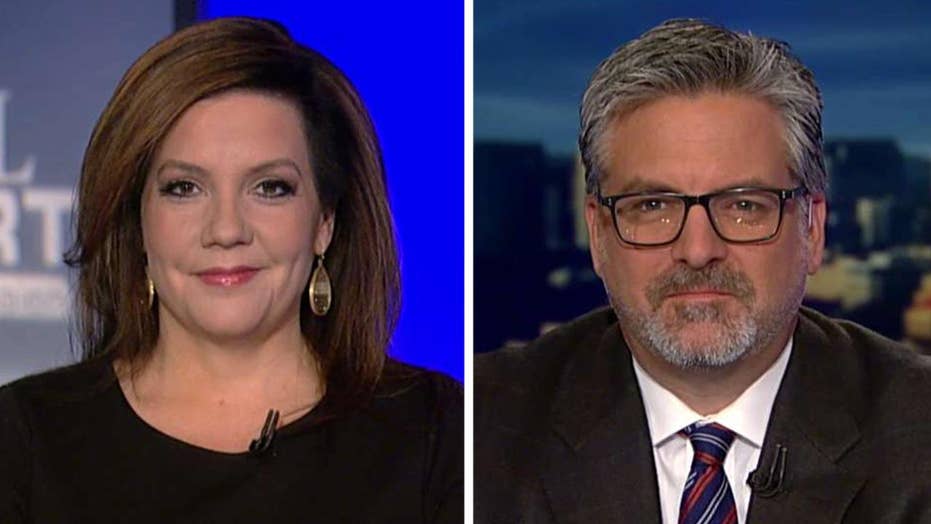 President Trump and the White House roll out a $4 trillion budget plan; The 'Special Report' All-Star Panel debates if the money is going to the right places.

This is a rush transcript from "Special Report with Bret Baier," February 12, 2018. This copy may not be in its final form and may be updated.

PRESIDENT DONALD TRUMP: We are going to make our infrastructure modernized, and we are really way behind schedule. We are way behind other countries. We always led the way for many, many years. Then a number of decades ago it slowed down.

This is a commonsense and bipartisan plan that every member of Congress should support.

SENATE MINORITY LEADER CHUCK SCHUMER, D-N.Y.: A word that describes so much of the president's bill, probably about 80 percent of it, is Trump tolls. The Trump infrastructure plan is like a Hollywood facade. It may look real from afar, but in truth it's a flat mirage.

BRET BAIER, ANCHOR: Democrats responding in unison to the infrastructure pitch by the president, the administration. Bernie Sanders, senator from Vermont, saying the Trump budget is morally bankrupt. Bad economic policy pays for his tax breaks for the rich and large corporations by slashing Medicaid by $1.3 trillion, cutting Medicare by $554 billion, and slicing $10 billion from the Social Security Disability Insurance Program.

If you look at the budget highlights came out today, we mentioned the infrastructure, $1.5 trillion. And then national defense, $716 billion, $23 billion on border security, $17 billion on the opioid crisis. But a lot of talk about what it doesn't do and about long-term deficit and debt concerns.

Let's bring in our panel: Steve Hayes, editor in chief for The Weekly Standard; Mollie Hemingway, senior editor at The Federalist, and former Maryland Democratic Congresswoman Donna Edwards we welcome here. Steve, let me start with you. This rollout, obviously the president saying this is infrastructure week. He's trying to pitch this. Does it go the full distance?

STEVE HAYES, THE WEEKLY STANDARD: No, I don't think it does. We've had infrastructure weeks before. We haven't had much success. Part of that I think is the way the president has chosen to talk about infrastructure in the past. Rather than emphasizing deregulation and getting rid of permits, which the White House is doing more this time. They have talked about it as necessary stimulus and they've emphasized the spending aspects of that. That's not something that's going to appeal to Republicans in the House of Representatives and I don't think it ought to appeal to Republicans in the House of Representatives. This is going to be a very tough sell for the president on the infrastructure package alone. I can't imagine it goes anywhere.

Jim Manzi is a policy analyst who has done good work on how to do smart infrastructure spending. He talks about the importance of coming up with projects that help regional or national interests and can enable private wealth generation as opposed to just being, again, these handouts. So we have a lot to learn about this infrastructure bill and how much it goes from the normal way of doing it to this better way of doing it.

But in general this is the budget that just is irresponsible and how it doesn't take our debt and deficit problems seriously. And it's very disappointing to see.

BAIER: The infrastructure question for Democrats, I think this administration really would like to have Democrats sign on to some of this. On the issue of infrastructure, listening to Chuck Schumer and others today, it doesn't seem like they are that close. Are they?

DONNA EDWARDS, FORMER MARYLAND REPRESENTATIVE: I think there's a real reason for that. Typically infrastructure up until recent years has actually been quite bipartisan. Here's the problem with the president's proposal. One, we have an infrastructure deficit of about $4.5 trillion. This is $1.5 trillion. It privatizes a lot of what should be public infrastructure whether it's on transit or on highways and roads.

And of course we know that it has to be paid for so it can pass us back. The reality is that with all of the talk of investment in infrastructure, $1.5 trillion is about the same as the tax bill. It would've actually been better spent on infrastructure. I'm not sure where it's going to come from. And we shouldn't be privatizing our infrastructure.

BAIER: Do you think Democrats have found a new love of talking about deficits and debt that perhaps was not there in recent years? That there's more of a concern because you have this Republican administration that seems to want to be spending?

EDWARDS: No, the question is what you are spending on. And so for example, if we were spending $1.5 trillion on infrastructure, on our highways, our bridges, our roads to clear up the deficit that we have on spending infrastructure, that actually pays the economy back because it doubles up on the number of jobs that you create and in terms of making our economy actually much more productive and efficient. And so for me it's a question of spending it in the right kind of way if you want it to pay back.

HAYES: But just to be clear, you are not spending the tax dollars by giving people their money back. The people are the ones who earned the money in the first place. You are allowing them to retain more of the money they have already earned, or in cases of business is helping to grow the economy, allowing them to provide some of that money back to their workers to reinvest, to take others of it in profit. That is money the private sector is generating in the first place. The government doesn't have the first right to that money.

EDWARDS: That may have been true of 80 percent of the tax cuts had gone to only one percent of the population. And giving someone $1,000 bonus does not make up for that dollar or two dollars that they should have increased in their salaries.

We are talking about infrastructure here. It's really clear the nation's infrastructure is actually falling apart. Our roads, our bridges, all of it. So if Republicans are really serious about talking about infrastructure, we have to do thinks like think about how we pay for it. What about the gas tax that hasn't been increased in 25 years? What about making sure we invest in our transit systems which are falling apart and aren't keeping pace with the rest of the world?

BAIER: Mollie, I think the thought process is that on the tax cuts is that the growth will really kick into gear here. And we are starting to see them of that with some of these companies reinvesting. But on the infrastructure, if he wants to get this done, how does he get to the finish line considering the Democrat pushback, considering the pushback from his own party on deficits and debt?

HEMINGWAY: I hope that there is pushback from his own party on some of these issues. I worry that there won't be pushback. And the thing is about this that increased spending is a tax increase, eventually at least. The best way to give people more of their money is cut spending, not increase spending. And we're just seeing a lot of irresponsibility here.

I get the feeling that Republicans just don't feel this is a battle they care about right now. You point out the hypocrisy of Democrats suddenly caring about deficits. Well, Republicans long claimed they cared about these things and now they actually have the levers of power and they are not doing anything that demonstrates that they actually do.

BAIER: To your point, President Trump, then candidate Trump, and Speaker Ryan before.

BAIER: So Steve, is the Republican Party changing, or is this a moment in time that they are trying to get something done in a bipartisan way to then fix it in their mind later?

HAYES: I think the Republican Party is changing. President Trump ran for office not talking about debt and deficits in the way that Republicans had in the past. You can be cynical and say they didn't mean it in the past either. But he didn't make it a priority. And he argued against Medicaid reform. He argued a against touching Social Security. This has been something the Republicans included in their budgets from 2011 to 2016. And this president for the first time since 1976 didn't mention the national debt in his state of the union address.

That suggests to me it's a problem. It was in there in one of the longer versions of it. It was later taken out. But if you are not talking about it and you are the president of the United States, you don't care about it that much.