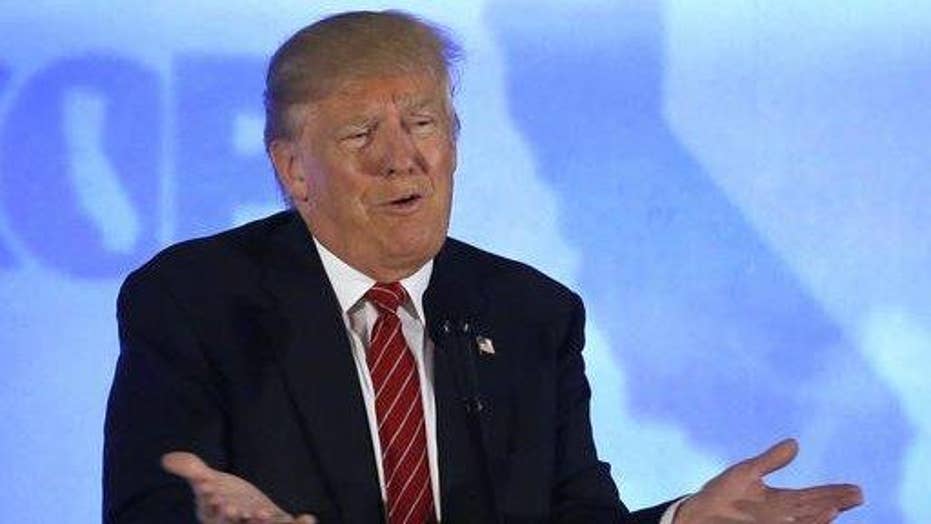 DONALD TRUMP: NATIONS MUST PAY FOR THE COST OF U.S. DEFENDING THEM OR DEFEND THEMSELVES

Lisa Boothe:  Donald Trump is not out alone on a ledge here. This is something that Senator Tom Cotton ,regarding NATO, also reiterated  after Donald Trump made those statements saying, look,  the relationship between U.S. and Europe used to be 50/50, and now it's 70/30 with the United  States taking the lead there  financially. Former defense secretary Gates made similar statements in the sense there's only a handful of NATO members paying the amount they should.  However, I’ll say that with a caveat that sometimes things are in the United States military interest, and there may not be financial gain there with U.S. sending troops and larger presence in the Philippines due to china aggression in the South China Sea.

Geraldo Rivera: I think that Lisa is right. Others have said it, but it resonates more profoundly coming from the mouth of Donald Trump, the probable, inevitable nominee for the GOP and competitive contestant for president of the United States. I think he really hit on a nerve that made people pay attention to a reality that Europe really has been slacking off in many ways, not only its external defenses, but internal defenses against things like terrorist.

Trish Regan: We have to think carefully about where we are spending our money these days. That's what he's getting at, and coming from the business world, he’s trying to negotiate in a public way. Think about these takeover kings like Carl Icahn who puts the pressure on, maybe he's not willing to do something, but he wants to communicate something.  I think that's in part what we saw from Donald Trump. He’s putting the pressure on these countries and saying, guess what guys? You're on notice, and all the Europeans I talk to are nervous about this.

Jonathan Hoenig:  Trump is really not being truthful on this one.  It's not truthful the U.S. funds most of
NATO, we fund about 22 percent, less than a quarter, and it's not too much more than what England funds in terms of NATO.  Because trump is not ideological, he doesn't see the purpose of this military spending. It's to defend America. North Korea is threatening the United States with nuclear war. We don't think we should protect, not only our interests, by helping South Korea defend against that real threat?

Jonathan Hoenig:  They can make any decision they want.  I think it's a bad business decision.  This is not discrimination. It’s not saying blacks or Jews or gays can't shop at Target. There's a reasonable expectation in most stores that men use the men's room, and given Target's average customer, a woman over the age of 35, I just don't think this is going to do much for them, bottom line.

Geraldo Rivera:  Well, I think that people should use whatever restroom they are, you know, presenting
themselves to the world as. I think that Target is right on the issue. The business call is really, you guys know better than I do, I don't know whether it's good for business or bad for business.  I think Target should have done it without making a big fuss  about it, perhaps, but I don't think a guy dressed up as a girl is going to go in there -- I mean, if there's a pervert  that's stalking children in the restroom, he's going find a way to do it, they don't need a transgender bathroom policy.

Trish Regan: Terrible business decision.  They are too far ahead of the curve on this. In other words, the country feels one way. Look, I think a lot of people would not question, a man dressed as a woman that goes into the men's room, that could cause a bigger stir. People don't like the idea that it opens a Pandora's box. It's okay. Eric, if you feel like a woman, you can go to the woman's room. That's not okay with America.  I don't think people care. They are not going to ask questions. If you look like a woman, go to the woman's room, if you look like a man you can go to the men's room.

Lisa Boothe: I think this is Target thumbing their nose at the customer base, and that's why there's outrage.  I'm sick and tired of the hypocritical selective outrage by those on the left. Look at businesses like PayPal that pulled out of North Carolina as a result of the law, 400 jobs gone. They do business in 25 countries where homosexuality is illegal and 5 countries where this is punishable by death. I’m sick and tired of this corporate bullying and the selective outrage here.

Geraldo Rivera: Just my advice to the actors who threaten that, don't mess -- the country's one thing, the candidate, even the presidency is another. The country is the country.  You love the country. The candidate will be fine once it he or she becomes president. The nation will be just fine.  Don't threaten to leave because people will just say they will pay your ticket.

Trish Regan: They need to stick to entertaining. Stay out of politics. It's not worth it. You got to get a kick out of Trump for saying, hey; I got to get elected now because we have to move Whoopi out. This may actually help America.

Lisa Boothe:  Donald Trump is looking to rally and coalesce the Republican Party, and what better rallying cry, then saying, if I get elected, Lena Dunham and Whoopi Goldberg are leaving the country.