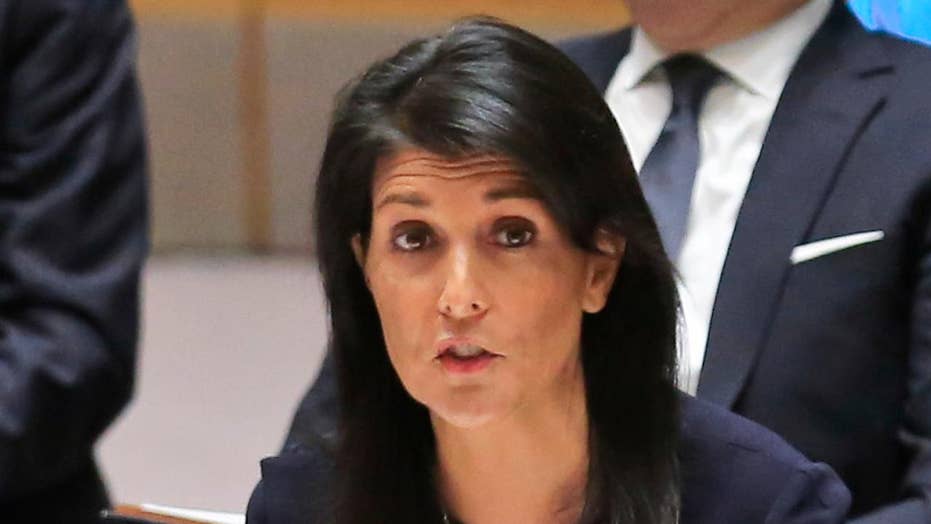 Reaction and analysis from the 'Special Report' All-Star panel

This is a rush transcript from "Special Report with Bret Baier," September 4, 2017. This copy may not be in its final form and may be updated.

NIKKI HALEY, U.S. AMBASSADOR TO THE U.N.: Kim Jong-un shows no such understanding. His abusive use of missiles and his nuclear threats show he's begging for war.

JIM MATTIS, DEFENSE SECRETARY: Any threat to the United States or its territories including Guam or our allies will be met with a massive military response, a response both effective and overwhelming.

HEATHER NAUERT, STATE DEPARTMENT SPOKESWOMAN: We continue to push with this plan for diplomacy because you can't give that up. That is always the preferred approach, to try to get them to come to the table.

HALEY: The United States will look at every country that does business with North Korea as a country that is giving aid to their reckless and dangerous nuclear intentions. And what we do on North Korea will have a real impact on how other outlaw nations who seek nuclear weapons choose to conduct themselves in the future.

EMANUEL: Mollie, your thoughts on that pitch today at the U.N.?

MOLLIE HEMINGWAY, THE FEDERALIST: I think it's good that what we were hearing that our reaction to North Korea has a lot to do with what we want to do in terms of sending a message to Iran. We have had a U.S. policy of denuclearization, or keeping North Korea from having nukes for 20 years, and it just hasn't worked. They haven't responded to threats or bribes or negotiations.

MARA LIASSON, NATIONAL PUBLIC RADIO: There have been a lot of mixed messages. The president has been on a lot of different sides of this. At some point he has talked about talking to North Korea. At other times he has tweeted that the time for talking is over. He talked about fire and fury. He talked about -- he even went after South Korea, inexplicably, for appeasing North Korea and suggesting that they only thing North Korea understands is force.

And then there was this other threat that the president made in a tweet saying that he is considering stopping all trade with any country doing business with North Korea. That obviously was talking about China who is North Korea's biggest trading partner and ours too. We do $650 billion of trade with China a year. I don't know if he's talking about having people walk into Wal-Mart and have nothing on the shelves, but that seems to me pretty unrealistic. There is room for more sanctions, but stopping all trade with China?

HEMINGWAY: China has been a huge problem.

HEMINGWAY: Ninety percent of North Korea's trade is with China. They do these little piecemeal things like cutting off gasoline but not crude oil which keeps the regime going. And if we actually care about keeping them, or constraining them, we actually do have to do secondary sections, and that's going to hurt everybody.

TOM ROGAN, THE WASHINGTON EXAMINER: I think that the functional issue here though is that there are two approaches. And I think ultimately the administration would be willing to accept North Korea now as a nuclear weapons power. What they would not be willing to accept nor should they, quite frankly, because of Kim Jong-un's irrationality, is the idea that North Korea could put those weapons onto intercontinental ballistic missiles. And that is something that alters the game.

I think what you will see coming up now potentially is much tougher action on China. We have already had the president denouncing the intellectual property theft investigations. But we could see more action at the WTO. I also expect you're going to start seeing carrier battle groups, B-2 bomber squadrons, B-1s out there, because the Chinese as much as they present this image that they hold the cards, the degree to which they do not want American military strikes is very significant. And Trump's random tweets help him in that regard because they don't want to make it --

LIASSON: Why cut off the South Korea trade deal, then?

ROGAN: I think he's -- the president's frustration on South Korea I think is misplaced because quite frankly it helps him to have that good cop, bad cop mentality. It doesn't matter. The tweet, to some degree I think it's easier for allies to accept the tweet because then they have Mattis and Tillerson calling them up and saying hey, hold on. But the Chinese don't have that. And again, ultimately, American military power is something the Chinese still fear.

EMANUEL: You all made reference to China. It sounds like once again China and Russia are not sold. Take a listen.

VASILY NEBENZYA, RUSSIAN AMBASSADOR TO U.N.: Whatever measures we are planning now, I'm not sure that they will influence the other side to abandon what they've been doing. This is not the way to get parties at the table and to seek for a political solution.

GENG SHUANG, CHINESE FOREIGN MINISTRY (through translator): What is definitely unacceptable to us is that on the one hand we work so hard to peacefully resolve the issue, and on the other hand our interests are subject to sanctions and jeopardized. This is unfair.

EMANUEL: It makes you wonder after another nuclear test what it will take to ever get them on board.

HEMINGWAY: Right. Russia and China simply just want to keep the status quo. Their call for negotiations enables them to just continue on as they are, and that is why these secondary sanctions I think are so important because both of these countries benefit so much financially from their trade with North Korea, China in particular. And so of course it's understandable that they don't want these sanctions, but that's precisely why this might be the best avenue for us to proceed.

EMANUEL: Treasury Secretary Steve Mnuchin assuming the U.N. is a dead end did talk about more sanctions. Let's take a listen to him.

TREASURY SECRETARY STEVEN MNUCHIN: I'm going to draft a sanctions package to send to the president for his strong consideration that anybody that wants to do trade or business with them would be prevented from doing trade or business with us. We are going to work with our allies. We'll work with China. But people need to cut off North Korea economically. This is unacceptable behavior.

EMANUEL: But if Kim is willing to starve his own people, will sanctions make a difference?

LIASSON: They haven't so far.

ROGAN: But functionally here, the Russians, the Chinese, they find this hilarious. They think it's funny. They're trying to challenge. But I think Trump is well-placed to ignore them. There are things you can pressure the Chinese on. If you put pressure, for example, on Chinese entities doing business behind the scenes with the North Koreans, that puts pressure on European companies as well.

You could also, for example, the Southeast China Seas, if the United States starts putting long range anti-ship cruise missiles there, that suddenly upsets the Chinese a lot. If we start selling F-35s to Taiwan, if we're constantly, whether in economic terms or military terms, practice power to show them that if they are saying this is the consensus, America is going to respond with our own consensus. And so I think there are still tools in the kit.

HEMINGWAY: And again, sanctions haven't worked precisely because they haven't been put forth enough. And they are really easy to get around unless we really use the U.S. Treasury to go after these Chinese --

ROGAN: Those that lead to Beijing.