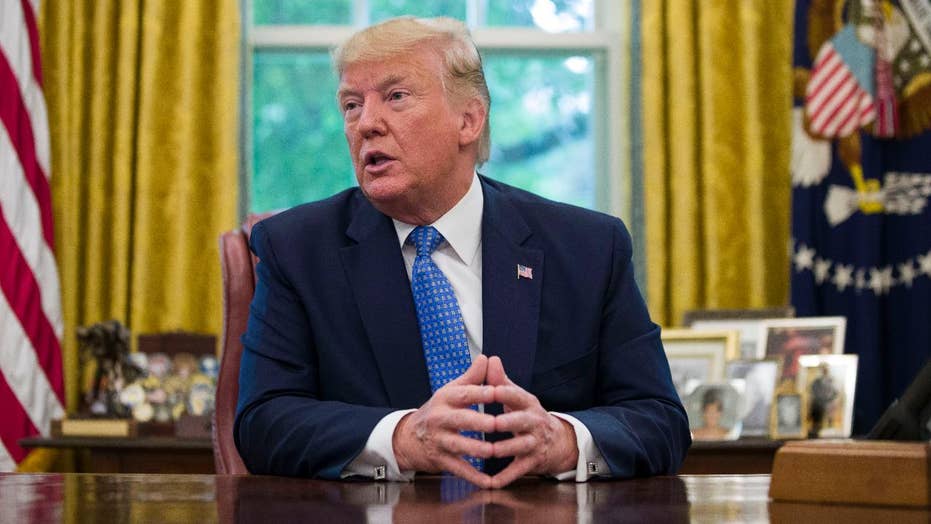 President Trump warns Iran of 'obliteration' if the U.S. is attacked; reaction and analysis from the 'Special Report' All-Stars.

This is a rush transcript from "Special Report," June 25, 2019. This copy may not be in its final form and may be updated.

DONALD TRUMP, PRESIDENT: Their country is not doing well economically at all. That can be changed very quickly, very easily. But they have to get rid of the hostility from the leadership. The leadership, I hope they stay, I hope they do a great job, but they should talk to us decently. We are all for them. We want it to be done properly.

BRET BAIER, HOST: President Trump in the Oval Office talking about Iran there. Iran pushing back, saying there is some mental retardation in the White House, saying that there will not be any talks until there is sanctions relief. It is the topic up on Capitol Hill and here at the White House when it comes to foreign affairs ahead of the G20.

Let's bring in our panel, Byron York, chief political correspondent for the "Washington Examiner," Charles Lane, opinion writer for "The Washington Post," and Guy Benson, political editor at Townhall.com and the host of "The Guy Benson Show" on Fox News Radio. Gentlemen, Byron, your thoughts on where we are.

BRYON YORK, CHIEF POLITICAL CORRESPONDENT, "WASHINGTON EXAMINER": First of all, this seems to raise some questions about consistency with the president. Just a few days ago, he canceled this planned retaliation against Iran for the shootdown of the drone because he said it would be disproportionate. Now he's saying any attack on anything American would be met with overwhelming force and possibly obliteration. So that's quite a change.

At the same time, though, he is keeping this maximum pressure campaign and even increasing it with some new sanctions. It is having a devastating effect. And Senator Rubio basically just suggested that we did strike back in some ways that we don't know about. So I think we don't really know the full story of what's going on right now.

BAIER: We confirmed there have been cyberattacks and the specifics and all the details they're not getting into. But Chuck, take a listen to Senators Graham and Menendez on the sanctions that were just imposed.

SEN. BOB MENENDEZ, D-N.J.: I think it's a little absurd to designate Iran's foreign minister if you want to have negotiation and diplomacy work at the end of the day. There are plenty of other entities to go ahead and try to sanction.

SEN. LINDSEY GRAHAM, R-S.C.: Putting the sanctions against the Ayatollah and the foreign minister makes sense. There is not a whole lot of respect for life. They put their soldiers into impossible situations. The bottom line is going after him and his assets will be provocative but necessary.

BAIER: And Chuck, I guess the question is, this is a different strategy than it was in June of 2009 when the Obama administration did not really respond to the Green Revolution on the ground in Tehran. This is betting that the people on the ground don't have a lot of love for the Ayatollah or the leaders, and they are sanctioning them anyway.

CHARLES LANE, OPINION WRITER, "WASHINGTON POST": Except that the president also said today we want them to stay when he was referring to leadership, so I have a little bit of similar problem to Byron. The nuances aren't held consistent there.

I think the right answer on these sanctions, frankly, is that their impact is mostly symbolic. The people who have been targeted, including the foreign minister, aren't the sort of people who necessarily were going to make a lot of use of the U.S. controlled banking system in the first place.

And so this sanction thing I think is a way of showing, yes, I pulled back there, but I'm not finished with you guys. I'm not giving you guys a free pass. And it helps to maybe reset the whole situation, because, frankly, the long-term play for this administration, if it's going to work at all, is to keep squeezing Iran on the oil exports and trying to ground their economy down. And so I think realistically there's been a lot of crazy rhetoric about mental retardation and stuff in the last couple of days, but I think we have wound up back at that place.

BAIER: Right. Guy, in order to continue that squeeze, you can do these sanctions unilaterally, but you really need Europe to hold the line.

GUY BENSON, POLITICAL EDITOR, TOWNHALL.COM: Yes, and there are ways to pressure Europe to do exactly that, but so far, as Senator Rubio mentioned, these sanctions are really having a bite. There was a question whether or not unilateral U.S. sanctions could really bring Iran to its knees or hurt them badly. I think the reason they have lashed out recently is because they feel like they are in a place of weakness. They are trying to stir the pot to get some movement because there is a "Washington Post" story about the strangulation of Hezbollah because of these sanctions from the Trump administration.

And what the president did here, I agree with these other two gentlemen, there were a few mixed messages from the president in the Oval Office today, but overall what he was doing was recognizing these provocations. It is Iran that has been pushing the international community closer and closer to the brink. The president said if we see it, it's not acceptable. Here are some new sanctions and some cyber intrusions. We are not going -- we are taking all of the bait right now, and that's why he used the term proportionality. I think a lot of Americans look at some of the messaging and say, OK, it may not make sense, but they look at the action of the president, and they say that seems pretty sensible.

BAIER: All right, panel, stand by. Next up, Congress debates immigration and the funding of the border and the effort there. And the presidential contest shifts to Florida.

SEN. BERNIE SANDERS, I-VT, D-PRESIDENTIAL CANDIDATE: We need a humane border policy, not a policy that tears babies from the arms of their mothers.

MIKE PENCE, VICE PRESIDENT: What Americans are going to hear the next couple of nights here in Miami only confirm that Mexico has done more in the last 10 days to secure our southern border than Democrats have done in the last 10 years.

BAIER: Vice President Pence in Florida ahead of the Democratic debates tomorrow and Thursday. Meantime on Capitol Hill, Democrats are working to get a bill, a funding bill out of committee onto a vote possibly tonight, maybe even 9:00 according to our own Chad Pergram. The House Speaker talking to her caucus said this. "It's not an immigration bill, so we cannot make any immigration promises in the bill. It's an appropriations bill. You can find fault with any bill that comes down the pike, but we must respect the bill for what it does rather than criticize it for what it does not. A vote against this bill is a vote for Donald Trump and his inhumane, outside the circle of civilized attitude toward the children," talking about the children of immigrants.

Back with the panel. Guy, she's trying to get people across the border here, across the end zone to this bill, and $4.5 billion. And some Democrats are worried that it's going to go to something else.

BENSON: So this is a $4.5 billion request that came from the White House, from President Trump, to help mitigate the humanitarian issue at the southern border, and the request was endorsed by "The New York Times" editorial board, which is not something that you see every day. It looks like the Senate is poised to pass overwhelmingly a bill along these lines. Pelosi is having trouble with her left flank once again. A lot of the AOC crowd saying they don't want to give a single dime to this effort.

One thing that's interesting, Bret. I had Steve Scalise on the show tonight, the Republican whip in the House. I asked him if Pelosi was having trouble with her whip count, if she brought the Senate bill, the clean Trump version of this, $4.5 billion to the floor, would House Republicans help her pass that legislation? He told me, yes.

LANE: Again, more and more as time goes on I'm reminded of the struggles John Boehner used to have on the Freedom Caucus and the far rightwing of his group in the House there. And now it seems to be replicating a mirror image with Nancy Pelosi trying to control the leftwing of her caucus.

And here it's very interesting because at the end of the day what this bill, if this bill was adopted to fund and reset all the facilities for the people down at the border, it's basically something Donald Trump wants. But she has to for political reasons portray it as something he doesn't want, saying that a vote against this bill is a vote for Donald Trump and for cruelty.

I think there's an interesting convergence going on here. For the first time we are finding a lowest common denominator. It looks like maybe, maybe, maybe, just maybe Republicans and Democrats in Washington can get together on the idea that they want to spend enough money to end this kind of embarrassment at the border.

BAIER: That's one element of it. The other element obviously is the asylum laws, which I don't think Democrats are going to get to or have agreed to, and that's not in this bill and the funding. But it's important to remember how we've evolved here and what Democrats had been calling this border situation before. Take a listen.

SEN. KIRSTEN GILLIBRAND, D-N.Y., PRESIDENTIAL CANDIDATE: The only national emergency is the humanitarian crisis that President Trump has created at our border. I think this is manufactured.

REP. HAKEEM JEFFRIES, D-N.Y.: There is no crisis at the border. The president's actions are manufactured.

KELLYANNE CONWAY, COUNSELOR TO PRESIDENT TRUMP: I think if you're going to spend billions of dollars, you're admitting that there is a real crisis here.

BAIER: It's been quite an evolution, Byron.

YORK: I did a piece on that today and stopped at 26 examples of such statements from Democrats. They have to realize, I think, that they are responsible for some of this stuff. Right now part of the opposition among House Democrats is opposition to the administration deporting people who are here illegally who have had full legal due process and have gotten a deportation order from a judge. That used not to be controversial. It is now with Democrats.

BAIER: We'll follow it. Panel, as always, thank you. When we come back, a community says goodbye to a hero.

BAIER: Finally tonight, from the White House, the people of Lincoln, Nebraska, lay a veteran to rest.

BAIER: Dale Quick, a 91-year-old Korean War veteran, died earlier this month. He died alone, no friends, no family known. Roper and Sons chapel appealed to the Lincoln community to make sure the unclaimed veteran was given the funeral he deserves since his family could not be located. Hundreds showed up, including Nebraska Senator Ben Sasse and Governor Pete Ricketts. Quick was buried with full military honors.

Thanks for inviting us into your home tonight. That's it for the “Special Report,” fair, balanced, and unafraid. “The Story” hosted by Martha MacCallum up in New York starts right now. Hey, Martha.