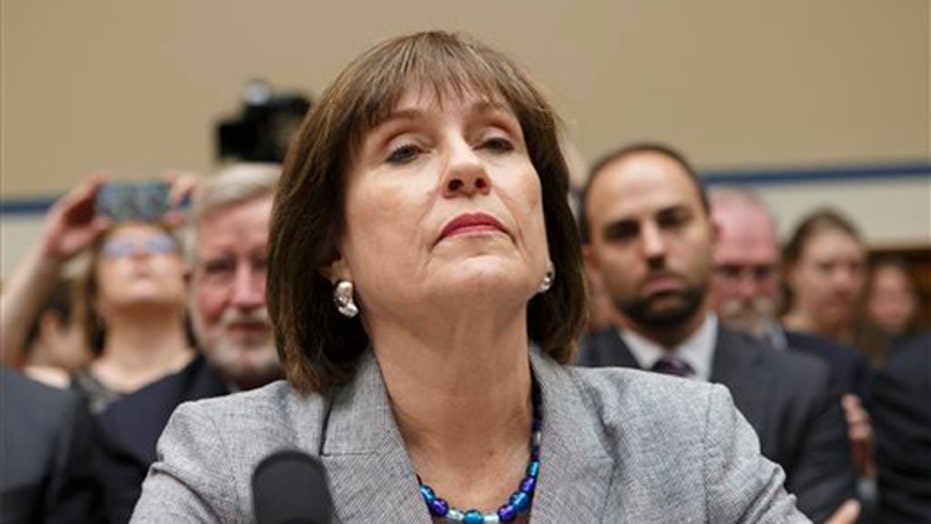 Timeline of deceit at the IRS

This is a rush transcript from "Hannity," June 25, 2014. This copy may not be in its final form and may be updated.

SEAN HANNITY, HOST: And this is a Fox News Alert. Tonight, stunning e-mail evidence has emerged indicating that disgraced IRS official Lois Lerner once targeted veteran Republican senator Chuck Grassley for an internal audit. And this story continues to develop at this hour. Now, we're going to have more on that in just a moment.

But first, earlier this week, lawmakers grilled top administration officials about the missing Lois Lerner e-mails, which is at the center of the IRS targeting scandal. Now, some of the most heated questioning came from South Carolina congressman Trey Gowdy. Let's take a look.

REP. TREY GOWDY, R-S.C.: You have already said multiple times today that there was no evidence that you found of any criminal wrongdoing! I want you to tell me what criminal statutes you've evaluated!

JOHN KOSKINEN, IRS COMMISSIONER: I've not looked at any.

GOWDY: Well, then how can you possibly tell our fellow citizens that there's no criminal wrongdoing if you don't even know what statutes to look at?

KOSKINEN: Because I've seen no evidence that anyone consciously...

GOWDY: Well, how would you know what elements of the crime existed?  You don't even know what statutes are at play! I'm going ask you again!

GOWDY: What statutes have you evaluated?

KOSKINEN: I think you can rely on common sense that nothing I have seen...

GOWDY: Common sense? Instead of the criminal code, you want to rely on common sense! No, Mr. -- you can shake your head all you want to, Commissioner! You have said today that there's no evidence of criminal wrongdoing, and I'm asking you what criminal statutes you have reviewed to reach that conclusion!

You're repeating a talking point from our colleagues on the other side that we're obsessed with the White House. It was Jay Carney who perpetuated the myth that it was two rogue agents in Ohio. It wasn't any of us. Was that accurate? Was that first initial line of defense that this is just two rogue agents in Ohio -- was that accurate, Commissioner?

KOSKINEN: Not that I know of.

GOWDY: All right, so that wasn't accurate, and that came from the White House! Who said there's not a smidgen of corruption? Who said that, Commissioner?

KOSKINEN: My understanding is that was the president.

GOWDY: It was the president! So that's Jay Carney and the president both inserting themselves into the IRS scandal! And you want to blame us for bringing the White House into it?

KOSKINEN: I haven't blamed you at all.

HANNITY: All right, now, before we get to our guest, let's go to the "Hannity" big board and let's take a look at timeline involved in all of this. All right, let's go to June of 2011. Now, this is when Lerner's computer crashes. The interesting thing is the investigation began 10 days earlier. Is that a mere coincidence?

And we go to September 2011 there, as well, the IRS cancels their archiving program, which, by the way, we now know is illegal because the archivist for the United States testified this week that, in fact, that was not legal.

Then we move forward as we check in with August of 2013. Darrell Issa -- he subpoenas all of Lois Lerner's e-mails. That's an important date.

Let's follow the rest of the timeline. February of 2014, the IRS knew that the subpoenaed e-mails from August of 2013 -- that they were gone.  Did they bother to tell Congress, which had subpoenaed the e-mails? No, they didn't tell them that. As a matter of fact, in March, when the IRS commissioner testified before Congress, he didn't mention it at all. And I'll get back to that in a second.

And then finally, in June of 2013, they revealed to Congress that, in fact, they were unrecoverable. But let's go back. Let's look at March 26th hearing. Remember, they knew in February, right here, they knew that the IRS e-mails were gone. Let's go to March. And at a hearing, the IRS commissioner tells Jason Chaffetz that, you know, all the e-mails were archived on an external server and could be retrieved. Take a look.

REP. JASON CHAFFETZ, R-UTAH: You checked the sent box and the inbox and you suddenly have all the e-mails, correct?

KOSKINEN: Right. They get taken off and stored in servers. And you've got 90,000 employees and you've got...

CHAFFETZ: I'm asking (INAUDIBLE) I'm asking you to find one. They type in her e-mail address.

KOSKINEN: We could find and we, in fact, are searching -- we can find Lois Lerner's e-mails.

HANNITY: Well, they knew in February that that probably wasn't the case. Why didn't they inform Congress at that time, considering it was way back in August the year before that they had requested and subpoenaed them?  That doesn't make any sense.

Now, the IRS commissioner also told Darrell Issa that he would provide the missing e-mails during the hearing on Monday night. Let's take a look at this.

HANNITY: All right, joining me now, we have attorney Cleta Mitchell, and from the American Center for Law and Justice, Jay Sekulow is with us. Guys, good to see you both.

HANNITY: ... a few things here. We know the IRS prematurely retired the storage devices. This is after the archivist said what they did was illegal and -- the exact words, "They did not follow the law." Lerner's computer crashed 10 days after the investigation began in this case. They ended their contract with the storage company after the computer crash happened -- interesting timing. The IRS commissioner's a Democratic donor.  What am I missing here?

SEKULOW: You're missing nothing. Except what's missing is Lois Lerner's e-mails, and the reason they're missing is what Cleta and I have alleged in our complaints for our clients, it's bad actions behalf of the IRS. I suspect these e-mails were worse. And Sean, the commissioner of Internal Revenue, when he was testifying, was giving false statements because he already knew, as you pointed out in that timeline, that, in fact, those IRS e-mails from Lois Lerner were gone.

And if you look at that timeline and focus in on the fact that as soon as they were notified that Congress was looking into the targeting, what happens 10 days later? The so-called crash. And there's another e-mail, one from Lois Lerner to the IT director where she says, you know, I'm trying to restore my personal files I lost on this computer crash. And the subject line of that e-mail is, Be careful of what you ask for, and it may have been tongue in cheek but the reality is a crime has been committed here, and the commissioner of Internal Revenue Service needs to be advised when he's testifying under oath before Congress to tell the truth.

HANNITY: You know, it's very interesting, Cleta, as I go to you here, first of all, we were told it was rogue agents in Cincinnati until the rogue agents told Congress, No, it wasn't us. We were taking orders from Washington. The president says not a smidgen of evidence -- that's not true. What do you make of this new development as it relates to Senator Grassley tonight, that, in fact, they were targeting him?

CLETA MITCHELL, ATTORNEY: Well, you know, that doesn't surprise me.  Nothing surprises me anymore. The IRS scandal reminds me of those infomercials where they say, Wait, wait, there's more, because every time you think you've heard it all, you hear something new, something outrageous that they have done.

How about when we learned just barely six weeks ago that the IRS, Lois Lerner, had sent a database of 12,000 citizens' groups to the FBI to go through and see about possible criminal prosecution of these citizens' groups? Look, we've had four commissioners of the IRS or acting commissioners in a row who've trotted up to Congress and lied. That's what they've done. They've made false statements.

We had Danny Wurfel, who was dispatched by the Obama White House to go over there last May, and he testified in June of last year there was no intentional wrongdoing, even though he didn't interview any employees.  That was a lie.

HANNITY: And the question is are we going to get to the bottom line here? Ultimately, were they able and capable of destroying all the evidence? I'm not so sure that's going to be...

MITCHELL: No. I'm not, either.

HANNITY: ... an easy -- 90 percent of the American people FOX News polled, Jay, think that the IRS -- that these files were deliberately destroyed, these e-mails, even 74 percent of independents and 63 percent of Democrats. This seems to be a growing scandal. A cancer is beginning to sort of work its way certainly around the IRS, maybe the White House?

SEKULOW: I think so. Sean, there is no way that these e-mails vanished, OK? First of all, there are recipients of these e-mails, and are they going to come out and say that all the recipients that received Lois Lerner's e-mails, those mysteriously vanished, as well? Remember, they floated that idea, saying there were six other crashes to kind of put out there, May not be able to recover those. They kind of backtracked on that.

Sean, we're in litigation. It's serious litigation right now.  There'll be discovery. We're going to -- if they exist, we're going to find them. If they do not exist, then the presumption is that what we've alleged in the complaints are true.

But Sean, this isn't -- you now know the connection between Treasury and IRS and the White House, and that's the chief of staff. So Lois Lerner may not have sent an e-mail to President Obama or to his team, but Nicole Flax sure did, and she had a lot of business at that White House while that was going on.

HANNITY: Why did they tell them...

SEKULOW: They knew exactly what they were doing.

HANNITY: They told them before Congress...

SEKULOW: When the president did that State of the Union speech and -- yes. Go ahead.

HANNITY: Yes, they said that before Congress. We're running out of time. We're going to stay on the story. Guys, good to see you.