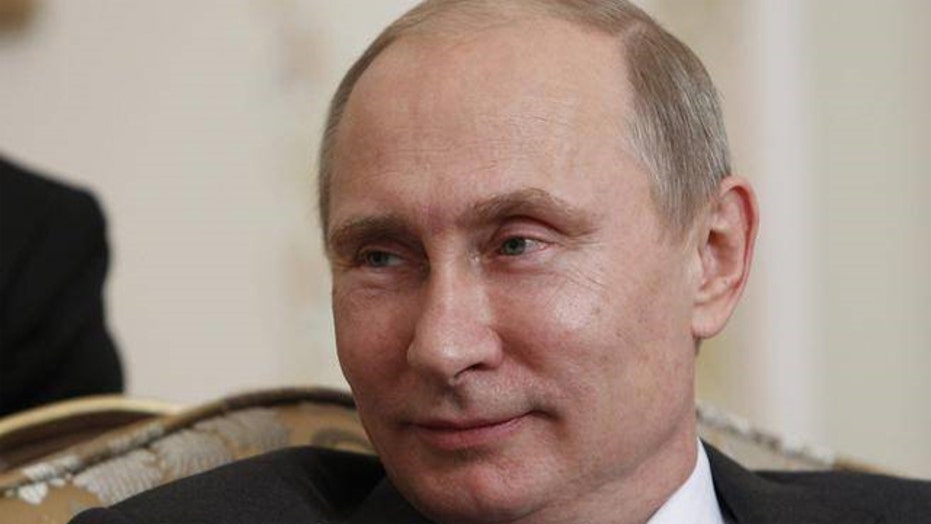 Time to get tough with Russia?

Variety of options available to US

MICHELLE FIELDS: This president gives off this impression of these red lines but as soon as somebody crosses it he doesn't do anything about it. Obama loves being president but he doesn't love the work that comes with being the president. You can't just wave your finger and give these empty threats. You need to actually do something. What we need to be doing is speeding up our natural oil and gas experts because if we can reduce other countries' dependence on Russia for oil, then we can reduce Russia's wealth and Russia's influence.

JONATHAN HOENIG: I think limited sanctions at this point will be effective only if they come with the moral condemnation. Putin is a tyrant; he's a thug bringing it back to the Soviet Era. Unlike the Soviet Era, they're not yet a military threat to this country. So again what's needed is loud, moral condemnation. The president has the ultimate bully pulpit and what is his response? A tweet. Think about what Ronald Reagan did, his speech, many people say, changed the tide of the Cold War. That's what's needed from this president.

JESSICA ERLICH: I'm actually supportive of having more serious sanctions like we do with Iran. I think this is a very important tool we have in terms of international policy but I think it also needs to be on a global level. The EU needs to step up and be involved as well.

WAYNE ROGERS: There are 28 members of the European Commission; you cannot get 28 people to agree to sanctions. For one sanction, you can't even get 3 countries to agree with it. The English have a vested interested in what happens in the banking system. The Germans get 40 percent of their gas from Russia. You've got people who are at odds with each other within the Commission. And as a consequence, it's difficult. You have to be discreet about these things and make them very pinpointed. I don't know what Obama can do without the cooperation of the Europeans.

CRITICS SLAM PRESIDENT OBAMA FOR FUNDRAISING AMID CRISES IN U.S. AND OVERSEAS

WAYNE ROGERS: I don't think it matters where he spends his time I just don't think this guy is interested in being the president anymore. What I see for example is that we've got this fellow down in Mexico, locked up down there for 3 months, and Obama hasn't uttered a word. Now you don't have to be in the White House to do that; you can be on the road. You can work on the road. He could do that; he just isn't interested. I think fundraising is a substitute for being president. He is a guy who likes to do what he likes to do which is play golf and fundraise.

JESSICA ERLICH: I think this is an example where he can walk and chew gum at the same time. There is a tremendous amount of debt leftover from the 2012 presidential election and they're finally starting to pay that down. So this is what needs to be happening so we can get Democrats elected in the mid-term elections that are coming up. There needs to be fundraisers going on, that's the bottom line. Republicans are doing it as well and he is the face that needs to be out there.

MICHELLE FIELDS: Jessica says this president can walk and chew gum at the same time; no he can't. He's walking among the 1 percent and the rest of the world in going up in flames. We have people being blown up in the sky. We have a border crisis. We have a drought and he's doing nothing. He's hanging around people who are willing to pay up to $32,000 a plate to see him. That's not presidential. He's more interested in being a salesman than a president.

WAYNE ROGERS: The whole thing is outrageous in the following sense. There's not one government program that works. Why? It's because there's no incentive to make it work. In the free market system you have incentive. It is absent from any government program no matter what is. For example, the Temporary Assistance Program for needy families is spoken about as an entitlement. Using that word is an insult to the working people of America. They're doing the same thing with this Pot system where you can go in, cash your money, and buy pot.

JONATHAN HOENIG: The whole country's getting high. The issue has nothing to do with pot; it has to do with government assistance. Welfare is wrong no matter what these people buy. It's wrong to take money from some people and give it to others. What's worrisome to me about monitoring what people buy with welfare is that controls breed more controls. Get rid of welfare and I'll tell you private charity is very discriminating about who they help and who they don't.

JESSICA ERLICH: Basically this has been happening in Colorado because Colorado's the first state to this where you can go in and buy pot for recreational use. It will be addressed going forward in the law if we see pot being sold recreationally around the country. This is the first state to have this. You can't buy liquor or strippers with your EBT cards; that's federal law. This is a new territory.

MICHELLE FIELDS: I think what we ought to do is start cutting a lot of these programs. 23 percent of Americans right now are on Welfare. The past five years we've spent $3.7 trillion on welfare programs. Democrats say that this is supposed to be a short-term solution. No, it has become a way of life in America and it needs to stop.