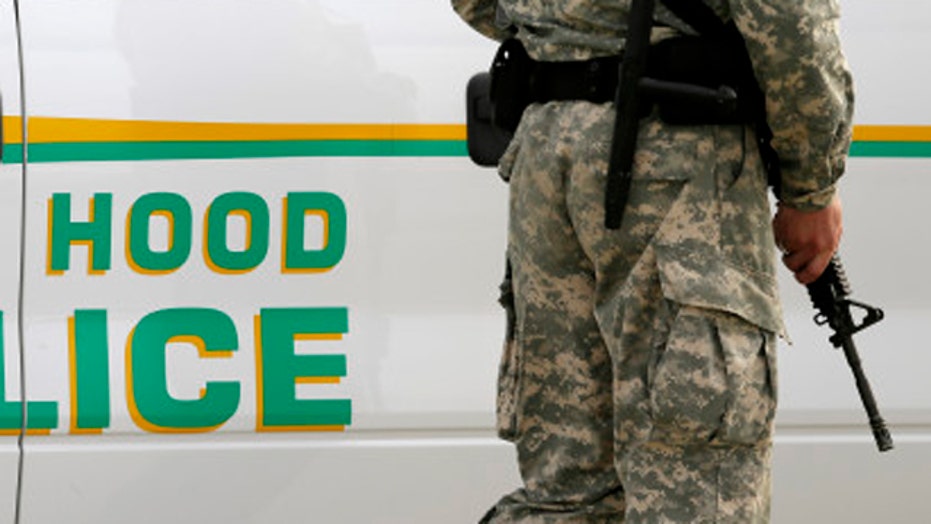 Time to allow soldiers to carry arms on stateside posts?

This is a rush transcript from "The Kelly File," April 2, 2014. This copy may not be in its final form and may be updated.

MEGYN KELLY, HOST: Joining us now by Skype, Staff Sergeant Shawn Manning, who survived the first Fort Hood shooting after being shot half a dozen times. Sergeant, thank you so much for being here. All the best to you. We've been following your story since 2009. Your reaction to what we've seen today.

STAFF SERGEANT SHAWN MANNING, SHOT SIX TIMES IN FORT HOOD SHOOTING: At first I was in shock. I mean, it was obviously a blast from what happened five years ago. I think all of us that were wounded that day, I mean, you know, it brings back images of, you know, the shooting back in 2009. You know, I, my heart goes out to those soldiers and their families that were shot today. I mean, it's a sad thing, and I know what kind of struggle they're going to have ahead, both them and their families.

MANNING: I'm not, and I was actually only at Fort Hood for a day and a half before I got shot back in 2009.

MANNING: So I didn't spend a lot of time on post, you know, I've been back to post to testify in the trial, but --

KELLY: Do you have any recollection of, you know, the moments that the shooter began firing in your case?

MANNING: Yes. I mean, it's almost surreal, I mean, you know, initially when we got shot we thought that it was a drill or that, you know, this was, you know, some sort of exercise. You don't think that somebody wearing a uniform is going to open fire and try to kill you, you know. You trust that other soldier. You trust those people around you, and it's something you would never expect to happen.

MANNING: Yes, unarmed. You know, you don't have a lot of options. You're in a building. You're confined. There's only certain exits and entryways, so I mean, you're, it's a feeling of helplessness, at least in my case, when that happened. You know, after I'd gotten shot, and I actually had to play dead for a while to prevent Hasan from essentially, you know, coming up and finishing me off, so.

KELLY: Is there, you know, the military has resolved in the wake of the first Fort Hood incident and in the wake of what we saw not long ago in Washington, that they were going to tighten security on these bases and do more to protect our men and women in uniform. Obviously more needs to be done. Do you have any thoughts on that?

MANNING: I think certain soldiers should be able to defend themselves and you should be able to carry weapon. You can conceal carry, you know, outside of the gates but as soon as you enter the gates you can't have a weapon. You know, I think in certain instances we should have our own weapons. We're trained soldiers, I mean, that's what we do. And, you know, overseas we carry a weapon every day, and this rarely occurs. So, you know, I think we have that right to defend ourselves, and that's one of the answers.

KELLY: You know, none of these situations are good, but you train as a member of the U.S. military to fight overseas to fight the enemy, not to have to expect you have to defend your life on a military base. All this time later, Staff Sergeant, how are you? In four and a half years later, shot six times, how are you?

MANNING: I still struggle every day. I mean, the shooting is something I think about every day unfortunately, as much I try to put it behind me. And I think I'm doing obviously much better than the first few years. But it's something that, you know, I'm reminded of every day, because, you know, you get out of bed, and you can still -- you're in a lot of pain, and it's hard to move around, and you know, it reminds you of what happened and how your life's changed after something like this.

KELLY: Sure. Thank you so much for your service. Good to see you. Sorry, it's under these conditions, but we appreciate you weighing in tonight.