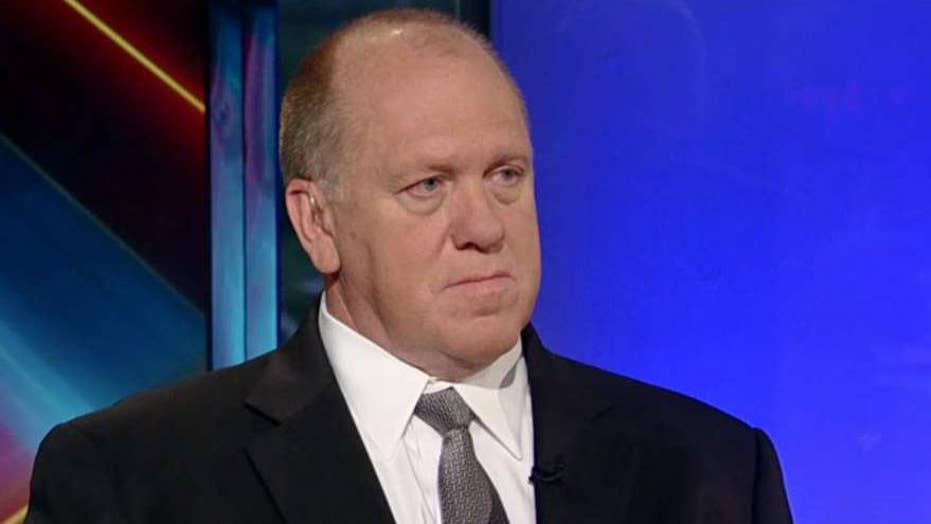 Homan: Democrats would rather abolish ICE than fix laws

This is a rush transcript from "Your World," July 18, 2018. This copy may not be in its final form and may be updated.

CHARLES PAYNE, HOST: Well, today's vote in support of ICE comes as Alexandria Ocasio-Cortez, the rising star in the Democratic Party, is calling for an all-out assault on ICE.

PAYNE: So what does former ICE director Thomas Homan think of all this?

Well, he joins me now.

Thomas, first let me start with the vote, 234-35. I think the interesting issue that 133 Democrats just decided to sort of -- voted present, and didn't decide to make a decision one way or the other, how do you feel about that?

You know what? What's incredible is, these politicians, members of the legislature, would much rather abolish a law enforcement agency than fix the law. We are -- ICE is enforcing the laws they enacted.

So rather than doing their job and fixing it, let's just abolish the law enforcement agency. It's ridiculous.

PAYNE: Also, the narrative became that scenes on the border where the narrative is that, hey, children, young kids, babies are being ripped from the arms of their parents, was happening because ICE -- that ICE somehow to descended on the border and were doing that.

Then, of course, later on, some smarter folks said, no, well, that might not be the case, but they are going into people's homes and dragging people out of their homes kicking and screaming, separating families.

HOMAN: Well, first of all, it's just like the 1,400 lost children, right, that they said the government lost. They found out, no, they're not lost. They're hiding.

The truth will come out in all of this.

But if you want abolish an agency for doing something another agency does, that is ridiculous.

But ICE is doing the job. People -- people want to ignore the data and the fact that 90 -- excuse me -- 89 percent of everybody we arrested last year had a criminal history, either a criminal conviction or pending criminal charges.

We are prioritizing against the criminals. And abolishing ICE, they're going to be less criminals locked up. Over 100,000 criminal aliens have been arrested this year walking the streets of this country. That wouldn't happen if ICE wasn't there.

PAYNE: And now, of course, it's one thing to have outrage and protests. But now it feels like they're going to be really -- if a lot of young people follow Ocasio-Cortez's lead, and they go to the airports and they go to different -- to your offices, I mean, this is going to be a very explosive situation, with people actually interfering with ICE agents trying to do their jobs or just even parking their cars to go into the office.

HOMAN: She needs to study the issue also.

So this is -- it's just -- these -- if she wants to be a congresswoman, then she needs to know the first thing she can do is fix the system and change the laws and close the loopholes.

I want to add one thing. If anybody wants to look to who to blame about child separations on the border, Congress needs to look in the mirror.

I went up to the Hill, along the head of CBP and CIS, and told them loopholes need to be fixed. One of the loopholes is the Flores Settlement agreement, which would allow us to detain families together in a dorm setting until they see a judge.

But they failed to repair it. They failed to address it. They don't want to do their job. It's much easier pointing the fingers at law enforcement.

PAYNE: Well, let's face it also. A lot of open border folks are just using this as the more convenient reason to attack and over the policy itself. We know the ultimate goal is to just have open borders for a lot of these protesters.

As I keep hearing it more and more, ICE is being compared with the most evil racist organizations that exist in his country, and you have Fortune 500 companies lending credence to that. I mean, that's nuts. How does that make you feel? How do you push back against that?

PAYNE: Beyond knowing the truth with respect to what you do, what you have done, and the professionalism within the organization, what if we played this out? What if ICE was abolished?

Could you kind of describe what some of these neighborhoods would look like, the neighborhoods that, ironically, would be most vulnerable if ICE wasn't around?

If you actually get arrested by the Border Patrol and asked to see a judge, and you get released to see the judge, and they get an order of removal from the judge, saying you must leave the country, no one's looking for them.

Let's look at HSI, the other side of the house. Almost 1,000 children this year wouldn't have been rescued from sex traffickers. Over 2,200 child predators wouldn't be arrested and indicted and behind bars; 981,000 pounds of narcotics wouldn't have seized.

Several thousand MS-13 members would still be roaming the country, especially here in Long Island, New York. I can go on and on about...

PAYNE: And they would be preying on immigrant communities.

People who actually waited in line legally, became American citizens, they would be preyed upon, wouldn't they? They would be the biggest victims of these -- these gang members.

HOMAN: You are absolutely correct.

PAYNE: Thomas Homan, thanks a lot.

Again, 234-35. The one Republican who voted no was Justin Amash, a Republican from Michigan.