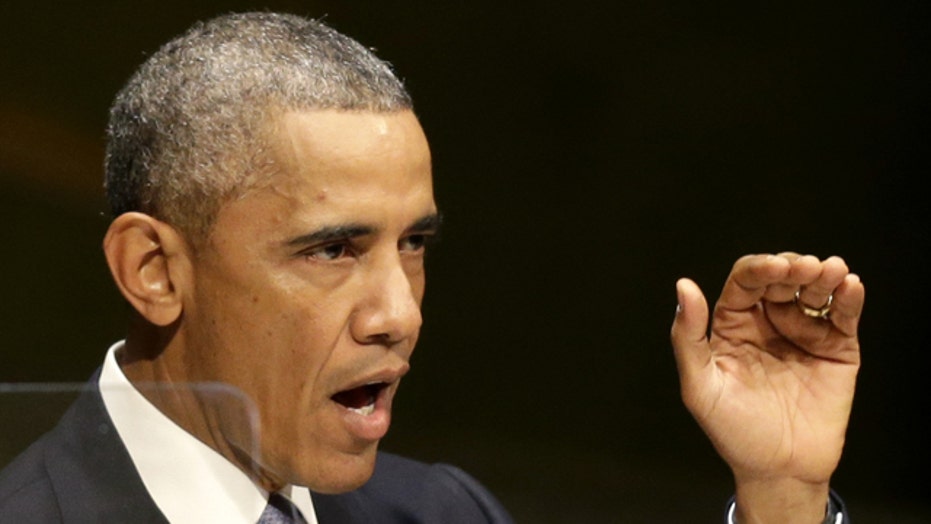 War on Terror: Then and now

This is a rush transcript from "The Kelly File," September 24, 2014. This copy may not be in its final form and may be updated.

MEGYN KELLY, HOST: Breaking tonight, President Obama declaring humanity at a crossroads between war and peace trying to rally the world in a generational fight against terrorists.

Welcome to "The Kelly File," everyone. I'm Megyn Kelly. At this hour, the smoke is still rising from more than a dozen new air strikes fired after from U.S. and partner nation aircraft hours after President Obama returned to the United Nations this morning.

He spoke today from the same podium where one year ago he announced the end of a decade of war in Iraq and the dismantling of Al Qaeda, a claim he made repeatedly at that time while touting his fulfillment of this campaign promise from when he was just a senator.

That's why there will be a clear choice in November, fighting a war without end or ending this war and bringing our troops home.

Both Bush and McCain represent the failed foreign policy and fear mongering of the past. I believe the American people are ready to reject this approach and choose the future.

KELLY: But today it was a very different message from President Obama. A 180-degree turn from the man who initially rejected the idea of a war on terror. Today it sounded much more like the call to action delivered to the United Nations by President George W. Bush back in September of 2001.

Watch this as we compare the message delivered from this podium 13 years ago and the one delivered today.

OBAMA, SEPT. 24: We have reaffirmed again and again that the United States is not and never will be at war with Islam. Islam teaches peace.

THEN-PRESIDENT GEORGE W. BUSH, SEPT. 2001: The terrorists are violating the tenants of every religion including the one they invoke.

OBAMA: They have embraced a nightmarish vision that would divide the world into adherence and infidels. Killing as many innocent civilians as possible. Employing the most brutal methods to intimidate people within their communities.

BUSH: The terrorists call their cause holy, yet they fund it with drug dealing. They encourage murder and suicide in the name of a great faith that forbids both.

OBAMA: And it is no exaggeration to say that humanity's future depends on us uniting against those who would divide us along the fault lines of tribe or sect, race or religion.

OBAMA: Collectively we must take concrete steps to address the danger posed by religiously motivated fanatics and the trends that fuel their recruitment.

BUSH: Every nation has a stake in this cause. As we meet, the terrorists are planning more murder, perhaps in my country or perhaps in yours.

OBAMA: There can be no reasoning, no negotiation with this brand of evil. The only language understood by killers like this is the language of force.

OBAMA: In this effort we do not act alone.

BUSH: The conspiracies of terror are being answered by an expanding global coalition.

OBAMA: We will train and equip forces fighting against these terrorists on the ground. We will work to cut off their financing and to stop the flow of fighters into and out of the region.

BUSH: We have a responsibility to deny any sanctuary, safe haven or transit to terrorists.

OBAMA: We are heirs to a proud legacy of freedom. And we're prepared to do what is necessary to secure that legacy for generations to come.

BUSH: We did not ask for this mission, yet there is honor in history's call.

OBAMA: I ask that you join us in this common mission for today's children and tomorrow's.

BUSH: So let us go forward confident, determined and unafraid. Thank you very much.

KELLY: Paul Gigot is the editorial page editor and vice president of The Wall Street Journal, a position he has held for more than a decade.  He's also host of the "Journal Editorial Report" right here on the Fox News Channel.

Wow. The sound bite at the beginning sets it up that he is running for president not to continue George W. Bush's course which he considered a failed foreign policy. And yet he sounded very much like the man he once condemned.

PAUL GIGOT, WALL STREET JOURNAL: He sure did. Especially the use of the moral language. He used the word evil.  Remember, that was a word that President Bush often uses. He said a network of death, that stark black and white terms us versus them terms that he condemned when he was running. He said we need to think about grays. And now the nuance is gone. He sounded like a Nobel Peace Prize winner who's been mugged by reality that not everybody wants peace.

KELLY: The Journal wrote an editorial a couple weeks ago suggesting that by launching this war in Syria the president is admitting is tacitly admitting that the liberal critique of the Bush's administration approach to Islamic terrorism was wrong, that their critique of it was wrong and that the Bush approach was right.

GIGOT: Well, when the president said if we open our hand to Iran for example then they will cut a deal with us. They haven't done that. If we withdraw from Iraq, then that will be stable and the tide of war will recede. Now we're back in Iraq. If we don't do anything in Syria, if we don't get involved in Syria, we can leave it alone. Now we're bombing Syria. Go right down the list, include Russia for example, he said we set relations with Russia, we'll be able to have a new partnership with Russia.  Instead Vladimir Putin is taking territory in Ukraine and upsetting the world order as the president said on Wednesday.

KELLY: And so, what does it mean now? Does President Obama -- now a wartime president.

KELLY: Does he now have the same foreign policy approach as President Bush?

GIGOT: I don't think he's quite there yet. And you heard that in his speech today. President Bush -- the big difference now I think is President Bush said the United States has to lead and people will follow. This president's still not quite leading entirely. He's still -- he used the word collective or collectively I think five times today's speech. He's still thinking multilaterally. He's no longer leading from behind but he's not leading from the front either. More like leading from the side. Arm in arm, march together. I don't think that that's going to work. He's going to have to really show that the United States is going to put most of the military force here and he's willing to do more than I think he is so far. And you've had the generals on. You've quoted them saying, you know, it's got to be more than just air strikes.

KELLY: They don't believe in the strategy. Not only that, they are predicting we will lose if he sticks to his guns on this strategy and does not put real American ground troops on the ground.

I do want to show the audience this on the subject of whether President Obama is in effect President Bush now.  The New York Times even wrote an article on 9/11 of 14 suggesting that, "Unlike Mr. Bush in the Iraq war Mr. Obama here," they're saying, "has sought to surround the United States with partners." They had to issue a correction for that just yesterday.

And the correction reads as follows, "We gave an incorrect comparison. The approach Mr. Obama is taking is similar to the one Mr. Bush took."

I mean, it comes full circle where even The Times is acknowledging that the two men are taking similar courses. And yet he was elected to the White House, Paul, promising that he would be a different kind of president, and Republicans said to him that's naive, it's not that President Bush loves war. It's that he hates terror.

GIGOT: I think they've been vindicated on that. I think the president -- as we wrote, has tacitly admitted that. Because the first obligation of any president is the security of the United States. And when he saw his polls falling as disorder broke out around the world, he understood that he had to do something. And so he's now acting with force of the kind that he never imagined he would have to use.

KELLY: And not only did it sort of collapse as we watched over the past six years, you know, a course that many people felt hopeful about has not apparently worked out. But the President was touting what he viewed as his successes thinks of -- less interventionalist policy. And here's an example of that. This is President Obama in 2001. This is the longer version. Listen to him talking to the United Nations, again about a year ago. Watch.

OBAMA, SEPT. 24, 2013: Together we've also worked to end a decade of war. Five years ago nearly 180,000 Americans were serving in harm's way. And the war in Iraq was the dominant issue in our relationship with the rest of the world.  Today, all of our troops have left Iraq. Next year an international coalition will end its war in Afghanistan, having achieved its mission of dismantling the core of Al Qaeda that attacked us on 9/11.

KELLY: I mean, I don't know where to begin. We've ended a decade of war. Well, we didn't end anything apparently. Five years ago Iraq was the dominant issue in our relationship with the rest of the world. Well, it is again. And now you can add Syria to the list. We were decimating Al Qaeda. We just had to bomb them thanks to an imminent attack they were planning on the homeland.

GIGOT: And I think the important thing to understand is, this is on his watch. He can no longer say that this was President Bush's problem. These problems have developed on his watch because Iraq was stable when he took over.

KELLY: As his own vice president said.

GIGOT: As he said about a year ago. So this is now on his watch.  And the question on my mind is, is he going to stay the course as a war president? Is he going to do what's required to win? And that means, if the ground troops are required, will you put them in? If you have setbacks will you explain those to the American people and double down on the effort like President Bush did with the surge?

Sometimes wars don't go as nicely as we hope. And this president, the danger here is he's really being gradual about it. And democracies don't do gradual wars well because we get tired of them. I'm worried that this president is starting too slowly and it's going to extend too long and we may not succeed.

KELLY: We've certainly seen over the past six years that withdrawing from wars does not necessarily end them. Paul, thank you very much.