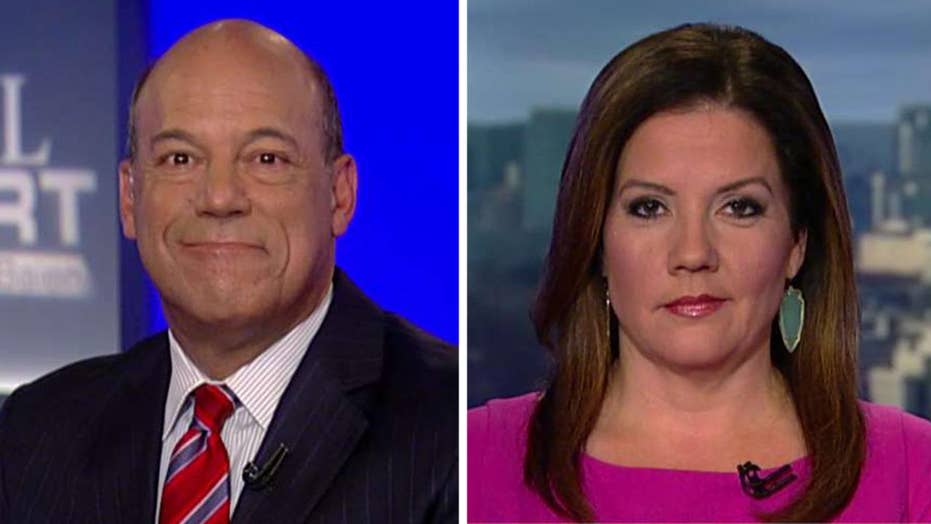 The tone of President Trump's visit to Las Vegas

This is a rush transcript from "Special Report with Bret Baier," October 4, 2017. This copy may not be in its final form and may be updated.

PRESIDENT DONALD TRUMP: The officers were standing up the line of fire to help those in danger and to find out where those horrible shots were coming from. Words cannot describe the bravery that the whole world witnessed on Sunday night.

TRUMP: We're not going to talk about that today.

REP. ROBIN KELLY, D-ILL.: Thoughts and prayers while they head to the bank to cash their NRA check.

SENATE MINORITY LEADER CHARLES SCHUMER, D-N.Y.: We cannot, we cannot let this tragedy, this American tragedy, another in a long line of American tragedies, fall out of our hearts and minds too quickly.

BRET BAIER, ANCHOR: After the tragedy, calls on Capitol Hill for some action, some different than others, but what's really gaining some momentum it seems is the so-called bump stocks that the Las Vegas shooter used to turn a semiautomatic rifle into a near machine gun, to ban those. They were legalized by the ATF during the Obama administration. And now lawmakers on both sides of the aisle are looking at that.

SEN. RICHARD BLUMENTHAL, D-CONN.: At the very least, back a bill that stops the killer accelerators like the bump stocks. This device has no purpose but to convert an already deadly weapon into a completely lethal carnage force multiplier.

JOE SCARBOROUGH, MSNBC: Do you think that Congress should look into see if perhaps they should be outlawed?

REP. TOM COLE, R-OLKA.: I think there is no question we ought to look into that.

BAIER: So with that, let's bring in our panel: Mollie Hemingway, senior editor at The Federalist; Ari Fleischer, former White House press secretary, and Susan Page, Washington bureau chief at USA Today. OK, Mollie, what about this momentum on Capitol Hill for something?

MOLLIE HEMINGWAY, THE FEDERALIST: Right. Well at least in this case we are talking about something that was involved in this actual deadly incident which is not usually the case when we go through this ritual of talking about gun control after any deadly event.

And that is something we do to make ourselves feel better about the fact that no amount of gun regulation is going to prevent people who are hell- bent on murdering people from doing so. And we have learned that through so many terrorist incidents involving planes, trucks, fertilizer, and any number of other things. So we are pretending where having a debate about gun control, but we are really having a debate about the nature of evil and whether a big enough government can contain it.

ARI FLEISCHER, FORMER WHITE HOUSE PRESS SECRETARY: Well, normally when this happens, you hear people say why can't we do something? What can we do to stop it? I don't blame people for having that reaction. It's a humane reaction. This is what you do when something goes wrong. You say how do we stop it from ever happening again?

I do think you have to pause, learn what we can from this and not rush into it because that minimized the politicization of it. But the broader point here about automatic weapon fire, whether it's the barrel stocks or whatever it is, we do not want to be a nation where you get your hands on a machine gun and use it. So I think there will be some coming together along those lines and I would like to see it.

The thing I would like to see less of, frankly, is what Secretary Clinton tweeted this morning about silencers. It has absolutely nothing to do with this and is a distortion of the debate about what really suppressors do because you can still hear the gunshot just like it's a jackhammer. So when something goes wrong like this, you hate to see the politicians rush in to make hay. What you do want to see is people try to find some reasonable solution. I think in this case there can be one for automatic weapons.

BAIER: There is, Susan, an interesting development with the politics of it. If you not at Republicans but at Democrats, The National Journal pointing out that six red state Senate Democrats, largely representing rural states, up for reelection in 2018, not one came out for more gun control in the wake of the Vegas killings. West Virginia's Joe Manchin cosponsored bipartisan legislation expanding the scope of background checks has been notably quiet. Heidi Heitkamp of North Dakota voted against that background check bill, has no interest in bringing up gun control in the run up to her reelection campaign. And Senator Claire McCaskill, the most liberal of the bunch, says National Journal, simple released an anodyne statement calling the Vegas attack evil and offering support for law enforcement. She knows the politics of Missouri better than the armchair pundits who insist that gun control is a slam dunk issue. It's an interesting take, those election concerns.

SUSAN PAGE, USA TODAY: I think Democrats have concluded it's not a slam dunk issue, that even though you can look at polling on something like background check and see that eight or nine out of 10 American support that, gun control is an issue that has hurt Democrats running for office.

And what surprised me in the wake of this particular terrible tragedy was the lack of a fervid debate. Remember after Sandy Hook, a huge debate, even after the Orlando Pulse shootings, Democrats took over the floor of Congress to talk about it for a day. You didn't see that here. You get the feeling that this is not something Democrats are actually going to pursue in an aggressive way.

And I'll tell you, I have one question about the bump stock issue of which there is some conversation. The NRA has had a no step is permissible attitude because it's a slippery slope. That's been I think their general argument. Will the NRA endorse this legislation?

BAIER: That is a great question, Mollie. Is there a point where some give has to be given?

HEMINGWAY: I think certainly there are all sorts of proposals that are out there where this could be part of a compromise, for instance, on allowing suppressors, not silencers. We talk about these things and we don't really know about it.

HEMINGWAY: There's not actually a gun show loophole. But that's one of the things that I think is probably a problem here is so many people who are talking about these issues clearly aren't people who use and fire weapons and many people in the country do.

BAIER: Yes, but my point is, does the NRA come off, is there some offer? Does President Trump somehow negotiate something with his friends with the NRA to come off on something?

HEMINGWAY: It's entirely possible because this is the kind of thing that a lot of people who fire weapons don't care that much about relative to other issues, so it could be part of a compromise. What I would encourage people to be understanding of is you can simulate a rapid fire just using a belt loop. You don't actually need one of these things. You can also with 3D printing, there's no way we are actually going to be able to control evil people who want to use tool to commit mass murder, and that's something we also have to think of because there are issues.

One of the things about this guy is he's the latest murderer who grew up in a fatherless home. It's very difficult to deal with that societal crisis of how most people who are in our prisons, most people who have severe problems grow up in fatherless homes. But this would be something that a lot of people could work on that could pay dividends in the future.

BAIER: It's interesting you point to the shooter. This is the president talking about the Las Vegas gunman today.

TRUMP: I can tell you it's a very sick man. He was a very demented person. We haven't seen that yet, but you will know very soon if we find something. We are looking very, very hard.

BAIER: And Ari, he was pressed about that by the pool before he got on Marine One. He said it's going to come out soon. So maybe he's kind of foreshadowing whatever the police are learning.

FLEISCHER: Typically the president would get a briefing on what information they have found in the course of an investigation and asking him not to reveal it yet because they don't want to compromise that information as more comes in. So he might know something. I think it's clear already if it was terrorism we all would have known it so I don't think -- that's probably ruled out.

But let me go back to a point Mollie was making earlier where this is going legislatively. Don't look for a Chuck-Nancy deal on this one. This is not going to be that type of compromise. If there is something to be legislated it's going to be incredibly narrow. I think it's going to be something that could garner virtually unanimous support on Capitol Hill, all aimed, again, at just automatic weapon fire.

There was a fascinating op-ed in The Washington Post this morning by a woman described as a statistician and a former news writer at Five Thirty Eight, the website, Leah Libresco. She said I'm not convinced gun control, I'm sorry, her headline on the story was "I used to think gun control was the answer. My research told me otherwise." It was fascinating, detailed read, nonpartisan. And I think it's why the Democrats aren't going to push for a fight on this. They don't have the facts on their side as the statistician --

BAIER: I want to turn to the next panel, but Representative Carlos Curbelo from Florida is writing a bill on bump stock and has bipartisan support.