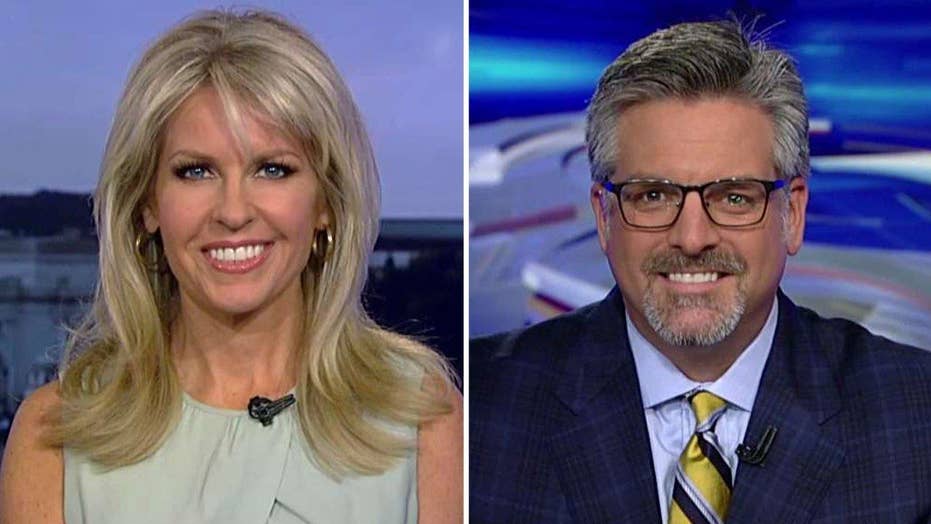 The Republican civil war heats up

This is a rush transcript from "Special Report with Bret Baier," October 11, 2016. This copy may not be in its final form and may be updated.

MIKE PENCE, REPUBLICAN VICE PRESIDENTIAL NOMINEE: Republican leaders here in Iowa, all across America are standing with the Trump/Pence team, and we're honored by that. But I really do believe that Republican leaders should join millions of Americans and support the Republican nominee for president.

REP. LOUIE GOHMERT, R-TEXAS: This garbage some have muttered about, it's so important we keep the majority in the House so that we can keep Hillary in check, my gosh, Stuart, did you see how well we kept Obama in check?

BRET BAIER, ANCHOR: Well, today was a lot about Republicans. The GOP nominee tweeting out starting this morning, lots of tweets, but here's just a few of them. "Despite winning the second debate in a landslide, every poll, it's hard to well when Paul Ryan and others give zero support." Next one, "Our very weak, ineffective leader Paul Ryan had a bad conference call where his members went wild at his disloyalty. It is so nice that the shackles have been taken off of me and I can now fight for America the way I want to. With the exception of cheating Bernie out of the nomination, the Democrats have always proven to be far more loyal to each other than the Republicans. Disloyal R's are far more difficult than crooked Hillary. They come at you from all sides. They don't know how to win. I will teach them. The very foul-mouthed Senator John McCain begged for my support during his primary. I gave. He won. Then he dropped me over locker room remarks."

Paul Ryan through a spokesman issued a statement saying, "Paul Ryan is focusing on the next month on defeating Democrats, and all Republicans running for office should probably do the same." That's what today's news from the campaign trail was.

People have long said, Monica, that there may be a civil war within the Republican Party and others blow it off. I mean, this is here.

CROWLEY: It is real, yes. And Donald Trump is fighting back.

Look, because Donald Trump represents an existential threat to the bipartisan ruling class, that means that he's fighting a multi-front war, so he's taking incoming from the president, the White House, Mrs. Clinton, her campaign, the Democratic Party, the Republican establishment, and the media. If he wins this race, it will be a straight-up miracle.

I think, though, that what he's doing here in terms of fighting back, this is why you have surrogates. The Republican nominee for president should not be punching down. He should not even be taking on these fights. That's what his surrogates are for.

I think he would have been better served to take the opposite approach and say, look, when I am elected president, I'm going to need Republican majorities in the House, so vote for these candidates. Even if you don't like me, vote for them. If he reverses the narrative and reaches out to Paul Ryan, reaches out to these Republican candidates, you know, it could have a potentially good payoff for him down the road. That's what an effective leader would do.

BAIER: A.B., I tell you, it was kind of baffling as you looked at all of the tweets. There really wasn't a lot of anti-Hillary Clinton campaign tweets. There was one late in the day. We'll talk about in the next panel. What about this, and how does the RNC go about knocking on doors to get people out to vote for Donald Trump and representative from this district?

A.B. STODDARD, REAL CLEAR POLITICS: Yes, that is really -- that's the key. I mean, he's fighting a primary campaign. He loves to fight the primary campaign. It's what he always reverts to when he's not teleprompter Trump and under Kellyanne Conway's strict rules. He is now off the teleprompter and out of his shackles and nothing left to lose mode.

But this is a man with a pitiful presence on the ground in terms of what 2016 national presidential political campaign mechanics are supposed to look like. Terrible anecdotes from around the battlegrounds where there's just not enough of an operation. If you are going to disconnect and divorce yourself from the party that way, it really makes a material difference, precinct by precinct, county by county, with enthusiasm, resources, whether or not your name is included on the call sheet when they make the call or when they knock on the door and give the speech about, you know, councilman so-and-so. Is Donald Trump being promoted by the party? If he disconnects from the party, it's between one and I don't know how many percentage points, but it absolutely makes a difference. He's just a man on his own now.

BAIER: We are one month away, Steve, and you talk about the balance of power. You look at the Senate. It's a thin majority, if you look at the races that are on the board, for Republicans. And there you see it on the board, 54-46, 44 Democrats, two independents that caucus with the Democrats. You know, they could lose it as of tonight. But the House, the House actually may be in play. Some pollsters are saying some of those races are going the other way.

STEVE HAYES, THE WEEKLY STANDARD: Yes, if the polls today -- if the NBC/Wall Street Journal poll has Hillary plus nine, is the result on Election Day, I think you're looking at a loss of the House for Republicans.

BAIER: So they shifted to plus-seven today with the post-debate stuff, but still, even at plus-seven.

HAYES: The plus nine I think was the two-way. But either way you're talking about a blowout for Democrats and potential of the Republicans losing the House, which is why it makes so little sense tactically for Donald Trump to be attacking Paul Ryan, who hasn't, by the way, unendorsed Donald Trump. Ryan is getting a lot of heat. It's not that you just have loud conservatives on one side and others, anti-establishment types, criticizing Paul Ryan for not fully supporting Donald Trump. You have a lot of people on the other side saying you need to walk away from Donald Trump. This is a disaster. If it's a cancer, you need to cut it out right now. And Ryan is trying to live in the middle of those two camps.

BAIER: A on the Democratic side, you had Hillary Clinton today campaigning with Al Gore in Florida, former Democratic nominee. He was making, Monica, a couple of points, one, the environmental, climate change point, but also in Florida, especially for him, make sure that you don't vote for the Ralph Nader types because it can cost you an election. Obviously he lost in 2000.

CROWLEY: Yes, his presence there with Mrs. Clinton is about two things -- the crucial battleground of Florida because if Trump loses Florida, he loses the election. And secondly, it's about Mrs. Clinton's outreach to millennials, because when you talked about Ralph Nader, of course, they're obsessed with climate change as an issue. Al Gore is the main cheerleader for that issue.

But more importantly all the recent polling shows about 60 percent, 65 percent of millennial voters would consider a third party, whether that's Jill Stein or Gary Johnson or somebody else. So Mrs. Clinton is trying to lock down that age group and make sure they come out for her.

Content and Programming Copyright 2016 Fox News Network, LLC. ALL RIGHTS RESERVED. Copyright 2016 CQ-Roll Call, Inc. All materials herein are protected by United States copyright law and may not be reproduced, distributed, transmitted, displayed, published or broadcast without the prior written permission of CQ-Roll Call. You may not alter or remove any trademark, copyright or other notice from copies of the content.