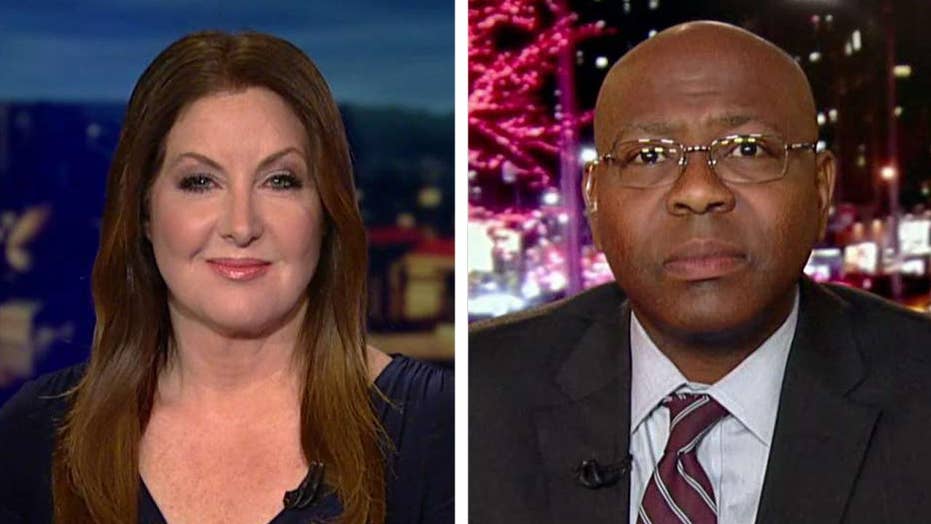 The politics of the Trump immigration framework

This is a rush transcript from "Special Report with Bret Baier," January 25, 2018. This copy may not be in its final form and may be updated.

SENATE MINORITY LEADER CHUCK SCHUMER, D-N.Y.: On the issue of immigration, the bipartisan group of moderate senators should continue trying to find a consensus. The White House unfortunately has proven unreliable and wildly unpredictable. Every time the president moves forward on one thing, his staff pulled him back and undoes what he said.

Now their immediate reaction to this, Rachael Bade has been on our show a lot on Capitol Hill, House Republicans not happy with this new White House immigration plan. "This is the beginning of the end of the GOP majority in the House, in the year when the Democrats impeach Trump, we can point to this moment, one Republican on the call tells me."

This often happens when anything happens in immigration, any specifics come out and the reaction is loud in this role. Jonathan, there is a sense that after this was rolled out, there were some calls being made from the right side of the president's flank.

JONATHAN SWAN, AXIOS: Right, and two sources have just told me that Stephen Miller just got off a conference call with a group of hardliners on immigration and it was -- I'm told a very feisty call. A lot of them hate this proposal. So he's angered a lot of people on the far right because he gives such a large amnesty.

But then I've also been talking to some progressive immigration activists who are in close touch with Democratic leadership and they say it's dead on arrival because it's in their words, such a radical proposal with such massive cuts to legal immigration. Some of them say the biggest cuts since the 1920s.

The White House seems to have angered just about everyone from what i can tell. Tom Cotton, the senator, put out a relatively statement about it. But it's the issue of immigration, as you point out, you always anger everyone once you start putting specifics out there.

BAIER: But isn't this what everybody has asked for, Leslie, to get specific, to start the negotiation with actual data points on the board that say here's our proposal. What's yours?

LESLIE MARSHALL, SYNDICATED TALK RADIO HOST: Yes. But the problem with this is that on Friday when you had Senator Schumer meet with the president, this is galaxies apart and you need the Democrats on this. You need bipartisan support for any immigration reform and we know this. You cannot hang as they are the DACA, the dreamers over the cliff with this. This is not only overambitious, it's impossible.

BAIER: What do you mean "over the cliff?" You are expanding the DACA population to 1.8 million in this proposal.

BAIER: Too heated on this. Hold on, hold on, hold on. Wait a second. Now the White House said this is phase one. There are many other elements of immigration. This is their first marker out there and they are doing something that conservatives, Jason, just noted, will have a hard time with.

JASON RILEY, WALL STREET JOURNAL: Yes, yes, there is something, someone said earlier something in here for everyone to hate. Bret, we've seen a lot of these in previous proposals. A lot of this was in the 2013 gang of eight bill that passed the Senate but failed in the House. Passes on a bipartisan support including support from Senator Schumer of New York. And in that bill, you had a multiyear path to citizenship. You had funding for more border security. You had an elimination of the diversity visa and so forth.

But I think what we are getting at what the real problem is here which is that we don't know what the administration is going to do about overall levels of immigration. Right now we think about a million a year, around 70% of that is chain migration. I think there are a lot of Democrats out there that said OK, you want to change the balance? Last chain migration? Use some of those to give to people with skills, people with education but you do have hardliners like Stephen Miller, like Tom Cotton who want an overall reduction in legal immigration. And that is really where the divide is. I'm being told right now.

BAIER: Yes. Leslie, I didn't mean to cut you off. The bottom line here is it doesn't seem likely just by this reaction that this is going to get wrapped up by February 8.

MARSHALL: It's not, and that's what I mean by, you know, putting them over a cliff. Look, this is not a, you know, a one piece of legislation fix. I mean we all know this left or right. And I think we need to address the dreamers and not say, hey, address the dreamers in exchange for whether it's a Democrat or Republican doing that. We are even seeing in the language here, Bret, that the president is willing to concede there isn't going to be a wall for the entire southern border of our nation. We are seeing that in the language of what's been put forth out of the White House today.

BAIER: And I think you said something similar. Jonathan.

SWAN: Well, internally, though calculus was at the very least that they need something they can credibly call a wall. If they don't get that, Trump knows it's intolerable for his base. The question about legal immigration to meet is what's going to be the biggest sticking point on the left.

But also one thing we haven't mentioned yet is the language around interior enforcement, the increase in ICE agents that's something that's unacceptable to a lot of progressives. So, it's going to be very hard for them to hash out a deal. I think the space where the deal is possible is if Democrats give Trump enough money so he can build something that he can credibly call a wall and that there is some give-and-take on chain migration. Then a deal I think is possible.

BAIER: Go ahead, Jason. All right, go ahead.

RILEY: I was just going to say I think the real question here, we don't know the answer to, is whether Democrats really want a deal or whether they want this issue for the midterm elections. Dick Durbin reveals what the president said in a private meeting, to blow off any discussions. Chuck Schumer has come out and said a wall is off the table, knowing that will end discussions. Do the Democrats really want to deal or do they just want this issue to bash Republicans with come November?