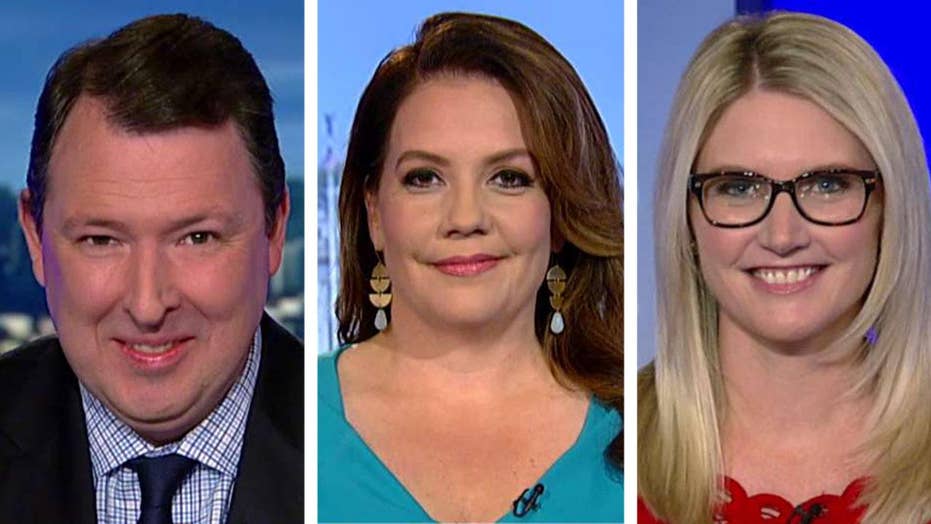 The politics of the Michael Cohen investigation

This is a rush transcript from "Special Report with Bret Baier," August 24, 2018. This copy may not be in its final form and may be updated.

THEN-CANDIDATE DONALD TRUMP: He gets hit by a --

COHEN: Correct. So I am all over that. And I spoke to Allen about it. When it comes time for the financing, which will be -- we will have to pay him.

AINSLEY EARHARDT, FOX NEWS: Did you know about the payments?

PRESIDENT DONALD TRUMP: Later on I knew. Later on. But you have to understand, Ainsley, what he did, and they were not taken out of campaign finance. That's a big thing.

BRET BAIER, ANCHOR: All of this coming as the president's personal attorney pleading guilty and now we're getting new revelations about the CFO of the Trump Organization being granted immunity. Allen Weisselberg, who was mentioned in that tape, the Wall Street Journal breaking this story. "Mr. Weisselberg was called to testify before a federal grand jury in the investigation earlier this year. Last year Mr. Weisselberg arranged for the Trump Organization to reimburse Mr. Cohen who had in October, 2016, made a $130,000 payment to Stephanie Clifford," AKA Stormy Daniels, "in exchange for her silence about the alleged affair. A person familiar with Mr. Weisselberg's thinking said he didn't know that was money was to pay Miss Clifford who goes professionally by the name Stormy Daniels, when he agreed in January, 2017, to a $35,000 monthly retainer for Mr. Cohen," again, former CFO, current CFO for the Trump Organization.

Let's bring in our panel, start there: Washington Post columnist Marc Thiessen; Marie Harf, Fox News analyst and co-host of "Benson & Harf" on Fox News Radio, and Mollie Hemingway, senior editor at The Federalist. OK, Marc, a lot to digest, but another immunity deal. Clearly the prosecutors in the southern district of New York were trying to get all of their i's dotted and t's crossed before this Cohen announcement.

MARC THIESSEN, WALL STREET JOURNAL: Sure, absolutely. Of course, it has nothing to do with Russia. It has nothing to do with Russia, Russian collusion, which is what this is all supposed to be about. It would be the height of irony if the Democrats tried to impeach Donald Trump over illegality tied to extramarital relations of a United States president, because I remember during the Monica Lewinsky scandal, when the Democrats position was that the private sexual relations of a president had nothing, was their private business and had nothing to do with impeachment. It was wrong to impeach somebody for that. So I don't think that there's - -

BAIER: You know that the argument they make is that this payment happened just days before the election, therefore influence the result of the election if you extrapolate it out.

THIESSEN: And if you talk to legal scholars -- first of all, the chairman of the FEC wrote in the Washington Post this week that he doesn't think that this was illegal, because it depends on what the reason was. If he has a tape showing Donald Trump saying we need to get this payment done quickly because the election is in three days, OK, now maybe Donald Trump is in a little bit of trouble. But he could just as easily say I didn't want my wife to know, I didn't want my kids to know. There are lots of reasons why he could do it.

BAIER: Here's what Rush Limbaugh says about all of this action in the southern district of New York.

RUSH LIMBAUGH, RADIO TALK SHOW HOST: They are making a beeline for Trump's tax returns. It happened many, many moons ago. Donald Trump took a tax deduction of nearly $1 billion that was permitted. And if they could somehow get a judgment via an audit that that massive deduction actually should not be allowed, should be reversed. Well, I think this is 20 years. The penalties and interest on that would wipe out the Trump Organization. That's what their real objective in all of this is. If they have to ruin Ivanka, if they have to ruin Jared, if the have to ruin Don Jr. and Eric, so what. They'll do it.

BAIER: One perspective of what he thinks is going to happen.

But on the CFO here, it's broader than just Stormy Daniels and these payments, right. As head of the Trump Organization's finance, he is involved in things that we know Mueller is looking at, ties to Russian financing, ties to Russian oligarch, Trump Tower Moscow. So we don't be what the answers are going to be from this, but the CFO getting immunity I think is a bigger problem than just this narrow campaign finance issue. It could be a much broader problem, and it could be, could be related to Russia.

MOLLIE HEMINGWAY, THE FEDERALIST: Presumably if Bob Mueller thought there was anything related to Russia he would not have spun this off to the southern district of New York. Or maybe that's part of his strategy.

I think, again, like you said, we need to take steps back, taking a step back and thinking through the real big problem we have with political prosecutions in this country. I read through that I.G. report that was 500 pages long and it showed that when it came to Hillary Clinton they had everybody up to and including Hillary Clinton on false statements, but chose not to prosecute that. They never squeezed anyone to get at her. They never said that destruction of evidence or the obstruction of justice was something that they would prosecute.

BAIER: And they actually gave immunity to Cheryl Mills.

HEMINGWAY: For nothing in return. They gave immunity without demanding anything in return or using to squeeze anyone else. And so you do want to see the law applied. You don't want to see anyone breaking the law. But if you only apply it to one sector of the people and it happens to be the people who are the political enemies and you let your political friends get away with anything, that is very destructive to the republic. We need to all have confidence in the FBI and Department of Justice, and that is something they are really not thinking through right now if they just decide we know this guy is guilty. We're just going to whatever it takes to find him guilty of something.

BAIER: What if the southern district of New York and the prosecutors in New York are making an effort, maybe not as detailed as Russia details there, but outside of what the Justice Department is actually doing. In other words, the state from both the Manhattan district attorney and the New York prosecutors saying maybe we can indict the president even if the DOJ has memos is saying you can't.

THIESSEN: Under state law, which of course you can't give a pardon for state law if you're the president of the United States. That's entirely possible that something like that is happening. And certainly Mueller, maybe that's why he passed it off is because Mueller can't indict the president and maybe there are things that he thinks are indictable in a New York courtroom.

But again, this is supposed to be about Russia. If Mueller is using this all to try and get -- if there are tapes of information that talk about Russia, then, OK, now Donald Trump is in trouble and he could be impeached if there was some evidence of criminal conspiracy. But it all comes down to the same thing that it's always been, which is did he do anything with Russia? Was there a criminal conspiracy with Russia? If there wasn't, he's going to be fine. If there was then he's in trouble.

BAIER: Meantime, the president tweeted this morning following up on the back and forth with the attorney general, "Department of Justice will not be improperly influenced by political considerations." Jeff, this is great, what everyone wants. So look into all of the corruption on the other side, including deleted emails, Comey lies and leaks, Mueller conflicts, McCabe, Strzok, Page, Ohr, FISA abuse, Christopher Steele and his phony and corrupt dossier, Clinton Foundation, illegal surveillance of Trump campaign, Russian collusion by Dems, and so much more. Open up the papers and documents without redaction. Come on, Jeff. You can do it. The country is waiting."

But that list of things in President Trump's tweet this morning, that is asking Jeff Sessions to use the attorney general position politically. He is begging for it. That's what he wants. And Jeff Sessions I think has so far pushed forward an agenda but not done the partisan things that Donald Trump wants him to.

HEMINGWAY: In this country we believe that all law enforcement is subject to political accountability. In the attorney general's case, that is the president of the United States. The way you are accountable to the people is through the president. And so when people say that it's good to have some independent agency, that's actually how you have banana republics. That's how you don't govern as an American.

We need to have him be accountable to authority. And he recused himself from all of these problems that we're facing right now, these politicized prosecutions. There are major problems in how the Department of Justice and FBI are handling things. If you care about campaign finance, there are problems with Hillary Clinton not being truthful about legal fees that she said were legal fees that were actually paid for the Russian dossier. You have violations with the company that put together that dossier and with Christopher Steele, they guy who is using his friends in the Justice Department to do the bidding of his foreign clients. If you care about these things, you have to have equal application. You need an attorney general who can actually respond and take care --

HARF: These are Republicans running these organizations. Bob Mueller is a Republican. All of these people were appointed by Trump. They're not Hillary's friends.

BAIER: You are taking all your lightning round time. Quickly.

THIESSEN: Peter Strzok has been fire. Andrew McCabe has been fired and the inspector general has referred a criminal referral on him. And according to "The Hill" there is a Justice Department investigation into the Clinton Foundation in whether there was any pay-to-play with Hillary Clinton as secretary of state. So if that all is true, then Jeff Sessions is running the Justice Department in a way that is ticking off a lot of the things the president listed.