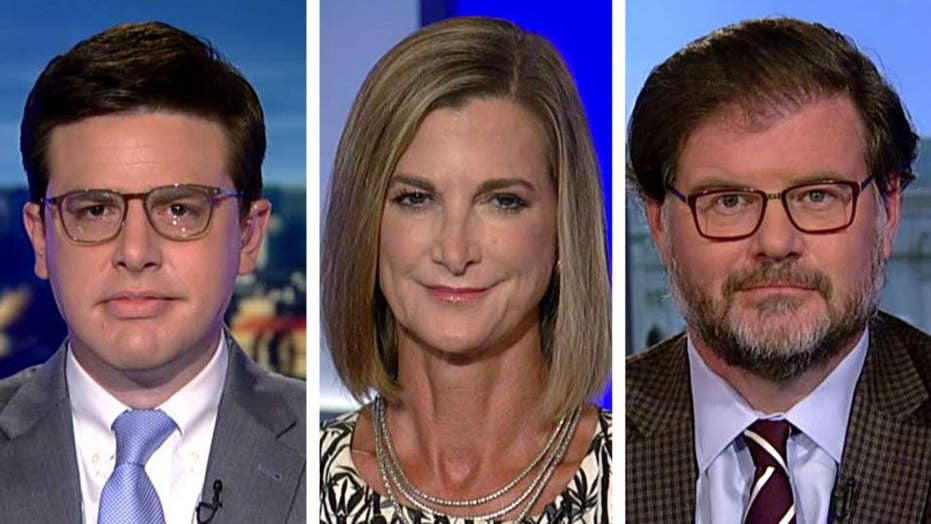 The politics of security clearances

This is a rush transcript from "Special Report with Bret Baier," August 15, 2018. This copy may not be in its final form and may be updated.

SARAH SANDERS, WHITE HOUSE PRESS SECRETARY: I have decided to revoke the security clearance of John Brennan, former director of the Central Intelligence Agency. First, at this point in my administration, any benefits that senior officials might glean from consultations with Mr. Brennan are now outweighed by the risks posed by his erratic conduct and behavior. Second, that conduct and behavior has tested and far exceeded the limits of any professional courtesy that may have been due to him.

JOHN BRENNAN, FORMER CIA DIRECTOR: I do believe Mr. Trump decided to take this action, as he has done with others, to try to intimidate and suppress any criticism of him or his administration. And revoking my security clearances is his way of trying to get back at me.

BRET BAIER, ANCHOR: John Brennan, former CIA director, security clearance revoked today, saying that it was a suppression of his freedom of speech, saying that as he was speaking freely on another cable channel. He has been speaking freely, criticizing this president pretty robustly.

JOHN BRENNAN, FORMER CIA DIRECTOR: I have seen this type of behavior and actions on the part of foreign tyrants and despots and autocrats for many, many years during my CIA and national security career.

He is mean-spirited. He is dishonest. He has shown a lack of integrity. And he has continued, I think, demean the office of the presidency.

He is, I think, the most divisive president we've ever had in the Oval Office.

This is nothing short of treasonous because it is a betrayal of the nation.

PRESIDENT DONALD TRUMP: I think Brennan is a very bad guy, and if you look at it, a lot of things happened under his watch. I think he is a very bad person.

BAIER: This has all created quite a stir here in Washington, as you can imagine.

MATTHEW CONTINETTI, WASHINGTON FREE BEACON: It is certainly a first for the president to deny a former CIA director has agreed to clearance. It's also a first, though, for some of Brennan's comments in the past. And so when we talk about the various norms that are being broken here, I think we do need to recognize that Brennan has behaved in a way that's very unusual for a former government official, accusing the president of treason, accusing him of running a kakistocracy, which is his I guess addition to increasing our vocabularies.

And so what Trump has done is, as usual, pivoted from one scandal by creating another one. But this case, Brennan's case, it may have been a justified exercise of his authority.

ANNE GEARAN, WASHINGTON POST: Right, so what did all those people have in common with the possible exception of Bruce Ohr, who was still in government? All of them have been publicly critical of the president. So I don't know what the president's intent is here, but by his actions today, he certainly is allowing his critics free rein to criticize him for retaliating in a personal way, basically carrying out a vendetta against one person who has been extremely publicly critical of him and holding a sword of Damocles over a group of others who have also been critical of him.

BAIER: Right, which is why you get Mark Warner and others saying it's Nixonian. A lot of reaction from Capitol Hill. Buck Sexton, who we know, tweeted out. He's a former official at CIA, "Brennan is not working for the government anymore. He doesn't need a clearance. He shouldn't have access. He's a partisan actor working to undermine the current commander- in-chief. This isn't that hard." Thoughts, Jonah?

JONAH GOLDBERG, NATIONAL REVIEW: I basically think everybody is right. I agree with Matt that this is unprecedented. I also agree that Brennan behaved in ways that previous CIA directors haven't, and it was an abuse of privilege that he had. I think that he was not a particularly good intelligence official throughout the Obama years and did a lot of things I criticized at the time.

At the same time, this thing is clearly for political cover. It was in the works for a while. They clearly had some kind of case that said break glass in case of Omarosa.

GRIFFIN: Right. And to me this is very similar to the tariffs against Canada which are justified on national security grounds. And there is no national security threat from trade with Canada, but this is the authority that the president is invoking to basically do something that is rankly political and personal. And the fact that Brennan has it coming is a good defense. The idea that Michael Hayden has it coming, I don't quite see that. This will do nothing -- the idea that it is against Brennan's free speech is nonsense. He is perfectly free to keep doing this, and now he will criticize Trump even more. But it does have us not talking about Omarosa for a day.

BAIER: Here is, I mentioned, Mark Warner, the vice chair of the Senate Intelligence Committee. Take a listen.

SEN. MARK WARNER, D-VA.: To me, this had an eerie memory of an enemies list. It smacks of Nixonian type practices of trying to silence anyone who is willing to criticize this president. That puts us, again, in uncharted territory. I thought there was a bit of an irony that one of the reasons they cited for taking away Mr. Brennan's clearance was erratic behavior. I wonder if this White House has looked itself in the mirror.

BAIER: Another senator, Rand Paul, was pushing for this action. He had tweeted July 23rd, "Is John Brennan monetizing his security clearance? Is John Brennan making millions of dollars divulging secrets to the mainstream media with his attacks on Donald Trump? Today I will meet with the president," he said, "and I will ask him to revoke John Brennan's security clearance." So there's other senators speaking out the other way. But to this point about suppressing free speech, that doesn't seem to be what would happen. The thing that would happen is they would possibly not be brought into consult on something that was security confidential, top secret.

CONTINETTI: Which they really do in any case. Elliot Abrams, who had served under presidents Reagan and George W. Bush, wrote in July when we were first discussing this issue that in many cases these security clearances just lapse. Or they are there if you bring them in for a consultation. I don't think the Trump administration is going to bring in John Brennan for consultations.

I will say one thing that was unusual to me about the statement was it's one thing if you say Brennan's behavior warrants the revocation of his security clearance. It's another if you say from now on from now on we're going to start blanket withdrawal of these security clearances once you leave government. And then introducing this third group of people by name and saying that they too may have their clearances revoked, including someone who continues to work for President Trump in the government, I think leaves the administration open to attack.

BAIER: You have to set the bar. What is the bar for pulling the security clearance?

There was reporting, Anne, real quickly, on another channel that the DNI, the director of national intelligence Dan Coats was not aware of this. There's reporting tonight from "Bloomberg" that he was consulted, that Vice President Pence was, John Kelly, national security adviser John Bolton, as well as DNI Coats was consulted.

GEARAN: Right so this was a collective decision. But we now know the paperwork for it was drafted weeks in advance and, as Jonah pointed out, was probably set aside waiting for the right moment. I will say one thing on the question of free speech -- Michael Flynn. Michael Flynn held or easily could have returned to his full security clearance during the last year of the Obama administration when he was on the campaign trail for then candidate Trump, disparaging the Obama administration and chanting "lock her up." That was free speech. No one tried to revoke his security clearance. It's basically the same question.