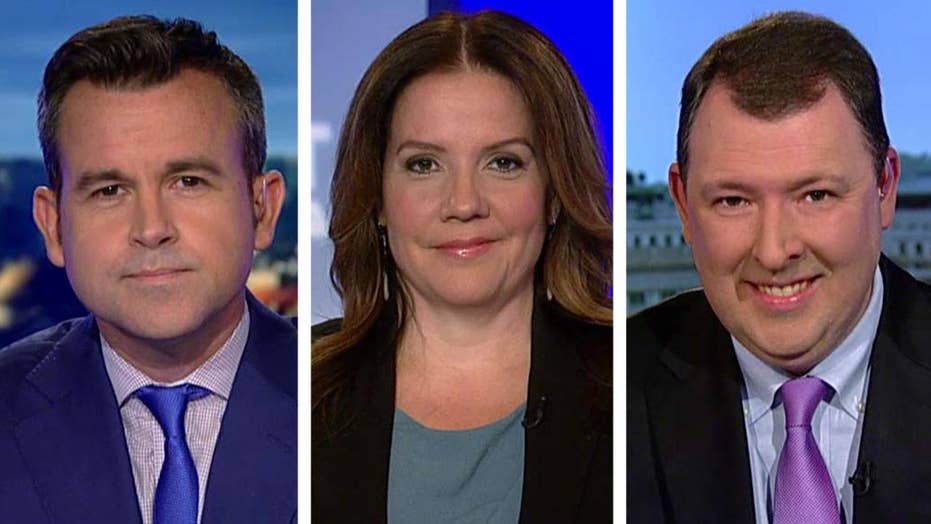 This is a rush transcript from "Special Report with Bret Baier," August 31, 2018. This copy may not be in its final form and may be updated.

BRET BAIER, ANCHOR: Today at the White House, though, it was about trade.

CHRYSTIA FREELAND, CANADIAN FOREIGN MINISTER: This is a very complex agreement, and we are going to continue looking at it. We know that a win- win-win agreement is within reach. The government of Canada will not sign an agreement unless it's good for Canada and good for Canadians.

BAIER: This was quite something today. It affected the markets. It affected this negotiating. The Toronto Star had a quote from the president: "Here's the problem. If I say no, the answer is no. If I say no, then you are going to put that out and it's going to be so insulting they are not going to be able to make a deal. I can't kill these people." He goes on to say "It's all off the record. They came knocking, Canada did, and let's make a deal, they said." He tweeted out "Wow, I made off- the-record comments to "Bloomberg" concerning Canada and this powerful understanding was blatantly violated. Oh well, just more dishonest reporting. I'm used to it. At least Canada knows where I stand."

With that let's bring in our panel: David Catanese, senior politics writer for U.S. News and World Report; Mollie Hemingway, senior editor at The Federalist; and Washington Post columnist Marc Thiessen. Marc, quite something, obviously the president said, oh well, Canada knows now, but it did affect the negotiations today.

MARC THIESSEN, WALL STREET JOURNAL: It certainly did. And Canada definitely knows how he feels, and quite frankly the whole world knows how he feels when it comes to trade. I think what Donald Trump is doing here in all of these negotiations is he has been accused of being a protectionist. What he is doing is he's using tariffs as a tool to pursue a radical free trade agenda. At the G-7 summit he proposed, he says he proposed in that meeting, all tariffs gone, all trade barriers gone, and everybody said no. And they said we're not going to negotiate with a gun to our heads.

Guess what, front page of the New York Times today, this is from the failing New York Times, President Trump's threat to impose tariffs on imported cars is working. Sending foreign leaders from Mexico to Japan racing to the negotiating table to make deals. European Union just agreed to go to zero tariffs on automobiles because what he did was he threatened tariffs. He imposed tariffs on steel and aluminum and said, guess what, I'm going to do it on cars, too. And they believed it. It was a credible threat because he had done it on steel and aluminum. So he's using these tariffs as a tool to tear down trade barriers with our trading partners.

BAIER: It seems to have worked with Mexico to get them to the table and to sign on to what he wanted. It was an interesting media story, too, Mollie, with Bloomberg saying that they didn't do it.

MOLLIE HEMINGWAY, THE FEDERALIST: President Trump is right that it's not a legal term. But when you agree that someone is speaking off the record to you, you do protect that. That's a very important thing to protect. It's an issue of trust and how you feel like the relationship is with a media outlet. They claim that they didn't violate that, although it's -- there is not a good explanation for how these comments and direct quotes got leaked to the "Toronto Star."

HEMINGWAY: But it's also interesting about the larger media story. As Marc points out, we were being told that President Trump loves tariffs and loves nothing more than killing free trade agreements when in fact what it looks like he was doing was what he said he was doing all along, which is applying a stick to negotiate better deals.

NAFTA is a 25-year-old deal. Whether you love it or hate it, there is no question that the economy has changed quite a bit in 25 years. And the proof is in the pudding. The EU trade commissioner says they would be willing to have zero tariffs if we do zero tariffs. That's very much in line with what President Trump had said he wanted, lower tariffs, lower barriers, lower problems that limit free trade. So I think a lot of people just weren't covering this story accurately at all.

BAIER: David, how does this play politically? The president is saying listen, we're getting taken advantage of, and he goes to these places like Indiana and Iowa and all these places in the Midwest, and says, listen, you might feel the pinch for a while, but we are going to win this thing. And is he winning it in the eyes of people in the middle of the country?

DAVID CATANESE, U.S. NEWS AND WORLD REPORT: He has a partial victory right now. The reason I say it's a partial victory is because, first of all, a lot of people didn't think he was going to get this far. And Mexico has come to the table, and it looks like the sticks are working.

The caveat that I would put on all of this is that Congress has to approve anything that is agreed to. And they get a 90-day window. We are not within 70 days of an election that is probably you're going to have a Democratic House in 70 days. Now, why would a Democratic House go along with any type of trade agreement that Donald Trump has? So I think we're dealing -- Trump could get this agreement with Canada and Mexico. But if he is dealing with a Speaker Nancy Pelosi in three months to try to ratify it, that is very -- and a very closely divided Senate. Remember, there are Republicans that are against a lot of what is going on here. Ben Sasse, you might lose Republican senators for some of the details in these trade agreements.

BAIER: Right. But you could gain some Democrats like Sherrod Brown in Ohio and others. Quickly, Lighthizer, the U.S. trade rep, was on this show, and said really this all has to do with China.

BAIER: All right, as for that breaking story out of New Mexico I just told you about, the FBI is now adding more details, saying they arrested five extremist Muslims, that's how they're charactering the five arrested here on federal charges. We'll continue to follow that story after a judge dismissed all the charges just the other day.