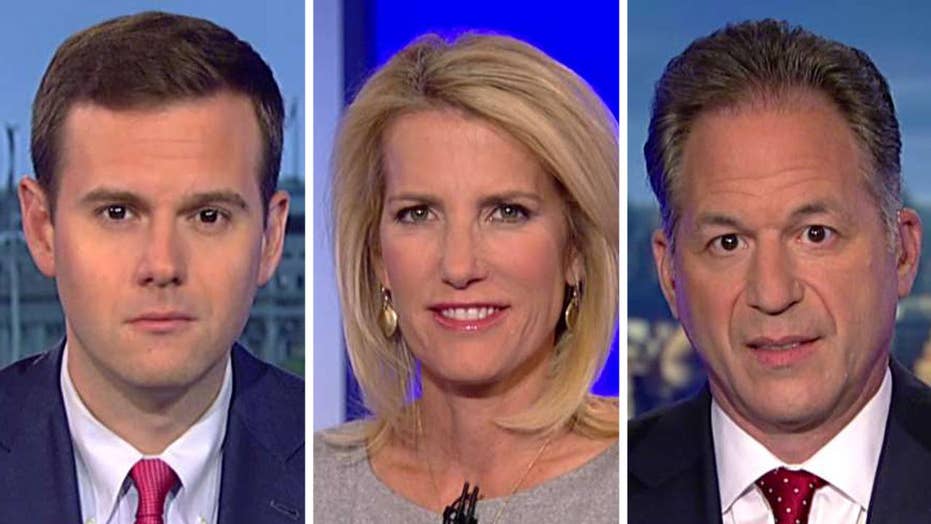 The politics of President Trump's response to Harvey

This is a rush transcript from "Special Report with Bret Baier," August 28, 2017. This copy may not be in its final form and may be updated.

GOV. GREG ABBOTT, R-TEXAS: This is a place that Texas and FEMA will be involved in for a long, long time. We will be here until we can restore this region as back to normal as possible.

BROCK LONG, FEMA ADMINISTRATOR: My support is designed to backfill the governor's needs and to make sure that we are here to support you guys. And we are going to be here for several years helping you guys recover.

PRESIDENT DONALD TRUMP: I am going to Texas tomorrow. I look very much forward to it. Things are being handled really well. The spirit is incredible. The people, the coordination between all of the different services, as you know, has been going very well.

BRET BAIER, ANCHOR: Local state, federal officials dealing with one of the biggest storms we've ever seen, especially with rainfall. And it's not over yet. In fact, it's just getting to the bad part possibly by Wednesday. What about all of this together logistically?

Let's bring in our panel: Charles Lane, opinion writer for The Washington Post; editor in chief of Lifezette, Laura Ingraham, and Guy Benson, political editor of Townhall.com. Laura, how's it going so far?

LAURA INGRAHAM, LIFEZETTE.COM: I think the coordination of the feds, local authorities, and the state authorities, I think it's been pretty sharp. I was in Corpus Christi by happenstance on Wednesday evening. And people there, they were getting ready for a bad storm, but I don't think, really, anyone knew just how bad it was going to be until a little bit later on Thursday.

And so Donald Trump plans to go tomorrow. I think there are some people on the left saying he's going to go and disrupt their recovery efforts. I talked today to Lieutenant Government Dan Patrick, and he said we welcome the president. I guess he's going to focus on Corpus Christi and not on Houston proper. But the lieutenant governor himself was flooded in today. He couldn't get out of where he was.

Texas is near and dear to my heart and so many Americans, and they are going to need this help for years. Governor Abbott, echoed by many officials, Democrat and Republican, say don't let the news cycle change your concern for us because we need you longer than the next news cycle. And that is the truth. We have water going over highway dividers. The soundproofing between neighborhoods and highways on 610, water is pouring over that. Everyone knows how tall those are. That is really, really bad. So lots of prayers and a lot of inspiring stories, a few looting examples, but a lot of inspiring stories.

BAIER: It is much like we saw in Katrina, just kind of slow motion, and then we realized the extent of how long this was going to be. Fortunately, New Orleans did recover.

The one controversial thing people focused on was the evacuation order. Here is the FEMA administration on that about whether to go or not go in Houston.

LONG: A lot of times, when you are in a city like that in a rainfall event, you have to ask people to shelter in place because of the timeframe you are given. The timeframe to evacuate the city of Houston could take days, days, clearly days.

BAIER: And today, Chuck, the governor said, you know what, we are past that. We've got to move on.

CHARLES LANE, THE WASHINGTON POST: Far be it for me to second-guess that decision. I have heard very smart thing said on both sides and it sounds to me like it was a reasonable call given what they knew at that time. You could have had a situation with hundreds of thousands of people trying to get out on their cars on these highways which are designed under the planning they had there in Houston, are designed to be the routes or channels which the water escapes the city in the case of a flood. So I don't think we need to spend too much time second-guessing that.

I think that the real verdict on this would be known over time because what really has to happen here now, there's all kinds of talk about how we are going to coordinate, we're going to supply everything we need. But history has shown that's where these efforts become controversial. That's where they can fall down is in terms of the recovery where people are starting to claim I didn't get my loan on time, I didn't get my reconstruction money in time. The bureaucracy held up this, that, the other thing.

And furthermore, we have the relocation issue. You have 30,000 people at last check living in shelters. How long will it be before they can get back to their homes? I'm not saying all that is going to go wrong. I'm praying it's going to go right. I'm just defining those are the issues over the medium term where the controversy will start to turn.

BAIER: Speaking of money, the president was asked about funding for recovery efforts for Texas. Here's what he said.

TRUMP: We expect to have requests on our desk fairly soon. And we think that Congress will feel very much the way I feel, in a very bipartisan way. That will be nice. But we think you are going to get what you need and it's going to go fast.

Texas is a unique place. It's a great, great state, great people. And I think it will be up and running very, very quickly.

BAIER: When he was asked whether he was reconsidering his threat about a government shutdown if they don't fund the border wall, he said those are two different, very different things, and this is going to be no problem.

GUY BENSON, TOWNHALL.COM: And that is the correct response. They are completely separate issues. And to say, oh, well, if you are going to ask for funding here, are you going to take this other threat off the table, they have nothing to do with one another. So I think you are going to see what we need to see from officials in Washington and in Texas to make sure that people get what they need.

The other thing, Bret, that strikes me the scenes playing out in Houston and that surrounding area, we spend a lot of time in this city on shows like this talking about the very worst that we see in America, in Charlottesville, Virginia, in Berkeley, California, with Antifa. Watching on Twitter and on our air and other network's air the incredible heroism of just average citizens helping each other, first responders, their bravery is remarkable, members of the clergy. There is no race or creed or other divisions that are reigning the day or winning the day in Texas. These are people helping people. That is the best of America, and it's really inspiring to see in a time that's obviously very scary for so many people.

BAIER: The leader of Finland remarked about watching those images.

INGRAHAM: Yes. And these are just citizens being good citizens. And cable news, a lot of it is the left/right madness of the moment, and we do get caught up in it, we do have to cover it. But I agree with what Guy said. I think one thing we do have to remember is that there are a lot of these positions in the federal department including at Homeland Security that aren't filled yet. And I think it was Congressman Pete Sessions today told me, from Texas, Dallas congressman, he said, we've got to get these positions filled. The FEMA director has only been in place since June. He is a pretty new to this job. It's a pretty big thing to walk into a big storm.

But we have a lot of deputy directors. And he said, God bless them, but we need more than actings here. We need people with real experience in this type of management to be able to help us with this recovery and ultimate rebuild. And I think Chuck Schumer and McConnell have got to get together and get this stuff done.