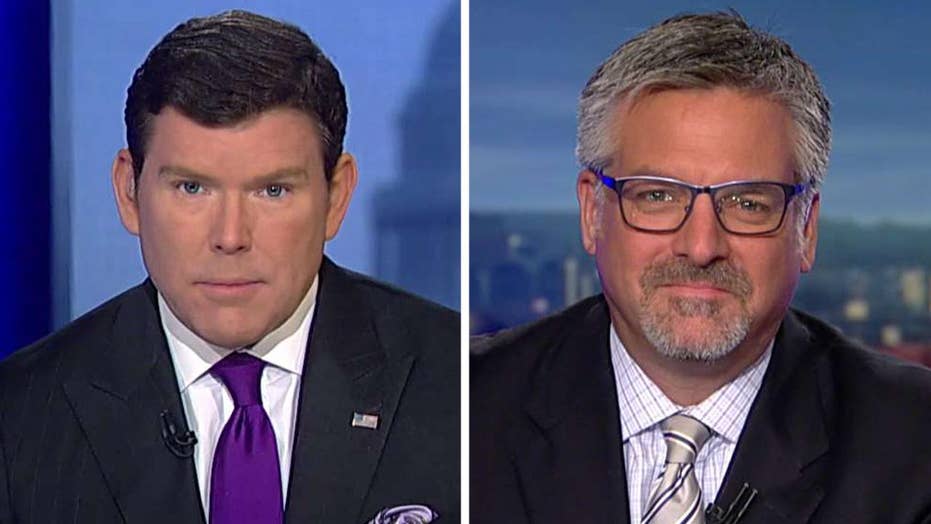 This is a rush transcript from "Special Report with Bret Baier," August 22, 2017. This copy may not be in its final form and may be updated.

JESS O'CONNELL, DEMOCRATIC NATIONAL COMMITTEE CEO: Rather than focusing on good jobs, better wages, economic opportunities for everyone, Donald Trump has decided to come to Arizona tomorrow not to help heal our nation but to sew fear and further divide us. Republicans like Jeff Flake have refused to stand up and tell him to stay home.

VICE PRESIDENT MIKE PENCE: The message I think the president will deliver tonight is that we need to get on with the business of the American people. This president was elected to rebuild our military, to restore our economy, to make America safe again. The president today will be talking about border security and visiting those that protect our borders in Arizona. I think tonight you will hear the president say that as the Congress prepares to come back, here's the agenda. We want to support our troops. Want to provide the resources.

BRET BAIER, ANCHOR: That's all the prelude to today's event, tonight's event just in a few hours. President Trump in Phoenix, Arizona, and we will cover that live here on Fox News Channel. This comes as controversy there on the ground in Arizona about whether the president is going to pardon Maricopa County sheriff Joe Arpaio, recently convicted of criminal contempt of court. When asked about that, here's what Sarah Huckabee Sanders said.

SARAH HUCKABEE SANDERS, WHITE HOUSE PRESS SECRETARY: To pardon Joe Arpaio? I know that's a question you guys have asked a lot today. I can tell you that there will be no discussion of that today at any point and no action will be taken on that front at any point today.

BAIER: At any point today. Let's bring in our panel: Steve Hayes, editor in chief of The Weekly Standard; Catherine Lucey, White House reporter for the Associated Press, and Matt Schlapp, contributor with The Hill.

OK, Catherine, the White House is kind of coming off of this speech about Afghanistan, largely getting praise especially within the Republican Party, and now sets up another campaign style rally that people are going to be paying attention to.

CATHERINE LUCEY, ASSOCIATED PRESS: Absolutely. And people from both sides of the aisle, you are seeing protesters are showing up there, supporters want to come. I think the big question going into tonight is what we are going to see from the president and what style we're going to see. Last night we saw a very straight performance. He was very focused. He was very calm. He was focusing on the teleprompter. But a Trump campaign rally can be a very different thing as we all know.

We know that sheriff question seems to be settled for today, but does he take shots at Republican lawmakers? Does he take a shot at John McCain? Does he reignite some of the rhetoric that has gotten him into trouble? I think those are the questions that we are all really thinking about going into this.

BAIER: And the former House Speaker Newt Gingrich had similar thoughts about tonight. Take a listen.

NEWT GINGRICH, FORMER SPEAKER OF THE HOUSE: It will be fascinating to watch because he's clearly in transition. He has a very presidential speech to a veterans organization tomorrow. And so he is right now in the balance. Does he go back to much more divisive, angry rhetoric tonight? Or does he stick with this presidential style which last night gave him enormous positives. My hope would be that he will sidestep Senators McCain and Flake. He's going to need both of them this fall in terms of the agenda. This is not a place to pick a fight.

BAIER: So what about that? Senators Flake and McCain won't be there tonight, Matt. He's not one to pull punches, though, this president.

MATT SCHLAPP, AMERICAN CONSERVATIVE UNION: No, he's not. And I think we do know the tone will be much different from last night. It is a rally. He enjoys these rallies. And I do think sometimes the president gets caught up in the spontaneity of the moment. I don't know if anybody on that plane knows exactly what he's going to do.

I think it's a good admonition from Speaker Gingrich to remember this fall is going to be brutal on the legislative front. The debt limit, a potential big, massive shutdown of government, the fight over the border wall. We're still talking taxes and health care on top of that. He does need to use his charm in the Senate, but, boy, it's quite strange for sitting Republican senator to write an entire book indicting a Republican president. That is several bridges to far for most Republicans.

BAIER: Perhaps even more strange is the Republican president to go after the Republican Senate majority leader. The last time he was asked about Senator McConnell was Tuesday at that press briefing that was covered for a lot of other reasons.

UNIDENTIFIED MALE: Can you talk about your relationship with Senator McConnell?

PRESIDENT DONALD TRUMP: I just want him to get repeal and replace done.

BAIER: Steve, take a look at The New York Times. It's just out with this piece that says Trump and McConnell locked in a cold war, threatening the GOP agenda. This is the quote, "The relationship between President Trump and Senator Mitch McConnell," majority leader, "has disintegrated to the point that they have not spoken to each other in weeks and Mr. McConnell has privately expressed uncertainty that Mr. Trump will be able to salvage his administration after a series of summer crises. What was once an uneasy governing alliance has curdled into a feud of mutual resentment and sometimes outright hostility complicated by the position of Mr. McConnell's wife, Elaine Chao, in Mr. Trump's cabinet according to more than a dozen people briefed on their imperiled partnership. Angry phone calls and private bad-mouthing have devolved into open conflict, with the president threatening to oppose Republican senators who cross him and Mr. McConnell mobilizing to their defense." That is quite a paragraph but I wanted to read it because it is quite a scene here in Washington.

STEVE HAYES, THE WEEKLY STANDARD: It is an incredible piece of reporting that reflects an incredible series of developments. We just never see this with a Republican president and a Republican Senate majority leader in open combat. The comments of the people quoted in that piece on the record no doubt were talking with the blessing of their principles. So this is just basically open warfare between Mitch McConnell and Donald Trump.

I think Matt makes a very interesting and relevant point. The president is going to need Mitch McConnell in at least some kind of relationship there in order to get things done this fall. There's a lot that needs to get done. There are things that have to get done. There are things the president wants to get done, like tax reform or tax cuts and what have you. I think the big question tonight is, does the president see this article? Almost certainly. Does he react to it in an extemporaneous way as he's talking tonight? Does he take shots at Jeff Flake, does he take shots at John McCain? And laying behind all of this is the president's praise for Steve Bannon, his tweet about Steve Bannon going back to Breitbart News and how effective Breitbart is likely to be with Steve Bannon back at the helm, his comment again that we talked about last night to Peter Boyer suggesting that he was encouraging Steve Bannon to take on the Republican establishment. You have a situation going into this very consequential fall where you could see this open warfare grow rather than shrink.

LUCEY: Yes, they are sending a message. And this speaks to the broader conflict, the intentions of the party. But Republican senators aren't just going to let the president insult anyone in the Senate. They're just not going to do that. They're not going to continue to let that happen. And I think that's what you're seeing here.

SCHLAPP: But Jeff Flake writes a book. You have to put this in context. And the fact that you have a Senate majority leader fighting with a president in their own party, I've seen that. You are right that it's unusual that it's so public, but are these hostilities always there? They are always there. What's different in the era of Trump? When you have private hostilities, they often become public hostilities.

LUCEY: They are getting very little done.

HAYES: In the sound bite you played Trump was very clearly leaving open the possibility that he could favor pushing Mitch McConnell aside, which is not something you see.

SCHLAPP: Or he's pushing Republicans to the fact that if they don't get these major things done, guess what, we are all sunk, the president and the Republicans. If you don't get stuff done, why do you need to be there?

SCHLAPP: Jeff Flake is at less than 20 percent in the state of Arizona. Let's really look at the position of these individual senators in their state. It is not strong. We can do better if we work together, I agree with that.