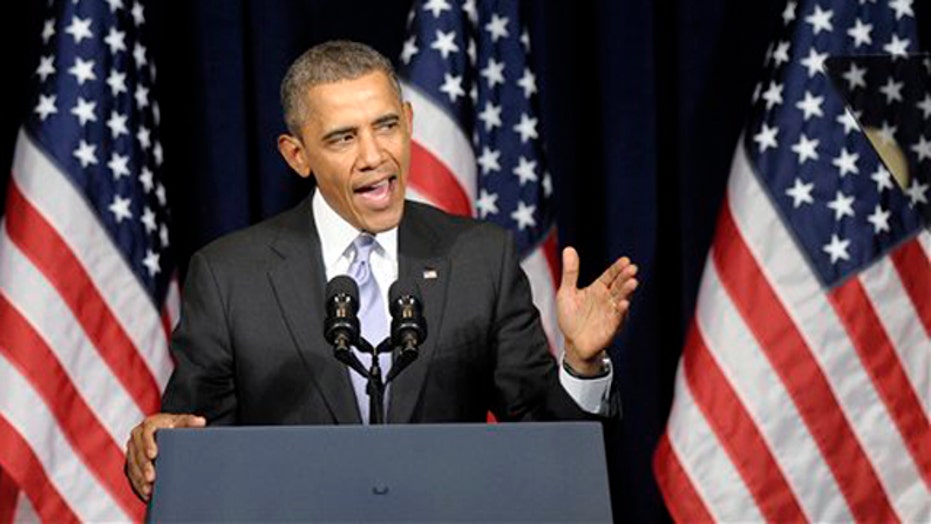 The Obama Effect: America at a tipping point

This is a rush transcript from "Hannity," February 28, 2014. This copy may not be in its final form and may be updated.

SEAN HANNITY, HOST: And we bring in our studio audience for reaction. How many think a tipping point constitutionally -- has the president overstepped his bounds? Hands up high. Who says no? You're a lawyer?

HANNITY: How did that happen?

HANNITY: Yes. So the president can change the health care law on his own, unilaterally, doesn't need to go to Congress? Why do we have Congress?

UNGAR: Here's -- you asked the question are we at a tipping point. There are some very odd things that take place in the Constitution on the subject of executive order. Clearly, the Congress is given the power to do these things. However, there are additional provisions, one in particular, that allows the president pretty expansive opportunities in certain emergency circumstances. The other issue...

HANNITY: Wait a minute. Twenty-seven times we've changed "Obama care," is that an emergency? Anybody think...

UNGAR: You're crossing the politics with the question. The question is, can he do those things? You're absolutely right, he did run against those things. You're absolutely right, politically, it is a retreat. But when you get to the legalities of it, so far, he really hasn't come anywhere close to a constitutional crisis. Not saying it couldn't happen, but we're nowhere near it.

HOLMES: I disagree, and I think that it's actually disgraceful that the president of the United States is giving speeches, saying, If Congress won't do this through the democratic process, I'm going to do it by executive order!

HANNITY: By the power of the -- I'm president. I can do whatever I want. Deneen, hi.

DENEEN BORELLI, FOX NEWS CONTRIBUTOR: Sean, I see individuals on a regular basis across the country, Tea Party individuals and other political events. People are tired of this runaway government that we are under, NSA spying on us, IRS intimidating people. We are totally at a tipping point, and Americans are tired of it!

HANNITY: What about Republicans, Monica Crowley? They have the power of the purse. They don't seem willing to take the president on. For example, if he's changing laws or he says, We're not going to force the immigration law, or he says he's going to remove the work requirements for welfare, or of course, then, targeting conservatives.

MONICA CROWLEY, FOX CONTRIBUTOR: Yes, doing it all unilaterally, by the way. There are a few strong, courageous Republican voices, like Senator Ted Cruz, Senator Mike Lee, Louie Gohmert in the House, but they are few and far between.

I'm not so sure that the Republican leadership understands what they are up against here with this president! This is not your father's or grandfather's Democrat in Barack Obama, and frankly, Nancy Pelosi and Harry Reid! This is a completely different ball of was. What they seek to do, in the words of President Obama in '08, fundamentally transform the country, transform the very nature of the American character and the American democratic process! And I'm not sure the Republicans understand what they're dealing with here! And if they do, they're not willing to take it on!

DOUG SCHOEN, FOX CONTRIBUTOR: I think you're absolutely right. We don't have a select committee on Benghazi. We don't have one on the IRS. All these scandals that you speak of are real scandals, but they've faded away! The Republican Party has only one philosophy, which to me is bankrupt -- Let Obama self-destruct. Don't have a positive message or agenda and hope we win the election!

HANNITY: I don't disagree with one word he said. I am disappointed the Republicans do not have a positive vision, agenda that says, If you elect us, we'll do one, two, three, four, five. Yes? Dr. Siegel?

DR. MARC SIEGEL, FOX MEDICAL CONTRIBUTOR: I think there's two issues here. First of all, there's the violations he's making where he's overstepping his bounds, like the issue of the 1st Amendment violation, the issue of delaying mandates left and right. "Obama care" is put into place, and then he -- he illegally violates the law that he himself helped pass.

On top of that, there's the issue of we can't believe a word he says! Those two things go together, that he lies -- you get to keep your doctor, you get to keep your insurance, you know, this thing is going to save you money -- all the lies together with the violations!

HANNITY: But wait -- why do the American people take it?

HANNITY: Ungar's dying to jump back. Go ahead, Mr. Ungar.

UNGAR: I'm going to give you an alternative reason for why you're not seeing this crisis. I wrote an article recently in my Forbes column and I quoted a senior policy adviser, a domestic policy adviser, saying that if the Congress isn't going to get this stuff done, then the president will. Except you know whose adviser it was? Ronald Wilson Reagan!

HANNITY: But Reagan -- but nobody has done it to this extent!

UNGAR: No, no, no. Reagan did it (INAUDIBLE)

K.T. MCFARLAND, FOX NATIONAL SECURITY ANALYST: Well, I was in the Reagan -- in the Nixon administration, the last time we were accused of having an imperial presidency.

HANNITY: She was only 12 years old.

MCFARLAND: I was a really great, smart 12-year-old. But the difference is the media was in a different place. The media criticized. The media took very seriously their job as the watchdogs of liberty. Now what do you have? The president does whatever he wants, and the media are like trained seals at the zoo...

MCFARLAND: ... applauding everything he does!

KIRSTEN HAGLUND, FORMER MISS AMERICA: But I think that's slowly changing it, but K.T. does point out that, historically, presidents have had a very adversarial relationship with the press and have tried to see curtail freedoms and see where there's wiggle room to be able to try keep everything as private as possible and control that message as much as they can. That's what they're doing.

But why people don't care? Because they see that people don't -- politicians in Washington don't hear their voice. They're about themselves, rather than about the people. There's very few public servants -- and Monica mentioned some -- that are really in it for the people. And we need to elect more of those.

HANNITY: So they're just as bad as the Democrats?

UNIDENTIFIED FEMALE: Some of them are. Absolutely!

HANNITY: Some of them are?

FATHER JONATHAN MORRIS, FOX CONTRIBUTOR: I don't know about politics, but I know that philosophy and that ideology matter. And I don't believe that President Obama is the devil. That's breaking news, OK, and you can crucify me for that later. But...

MORRIS: But what I am very concerned about is ideology and philosophy that go against basic moral principles that Jewish, Muslim, Christians, and even non-believers can agree on. For example, life, respect for life.

Can I tell you very -- one simple example? The bishops of the United States of America had one of the greatest programs for helping women who were being trafficked. You know what the Health and Human Services did? They said, We're going to take away all of your money, but it's for good reason. The reason is, even though you've been the most successful group in stopping trafficking of women, you're not offering them abortion.

So you know what? All federal funding is gone! That's ideology and philosophy that has transformed the nature of our country! That's a very, very bad thing!

HANNITY: (INAUDIBLE) freedom of religion and that goes to the contraception mandate. And they can spin this any way they want, the insurance company's paying for it, but it's really the Catholic church, Catholic charities, Catholic hospitals, right?

MORRIS: And they're getting out of business! For example, in Boston, they're no longer in the business and the service and the ministry of adoption. Why? Because unless they send children to gay couples, they no longer get any of the services...

HANNITY: Now they've gotten out of it.

HANNITY: All right, we're going to take a break...

MORRIS: That is a fundamental change in the way the United States of America operates as a country!