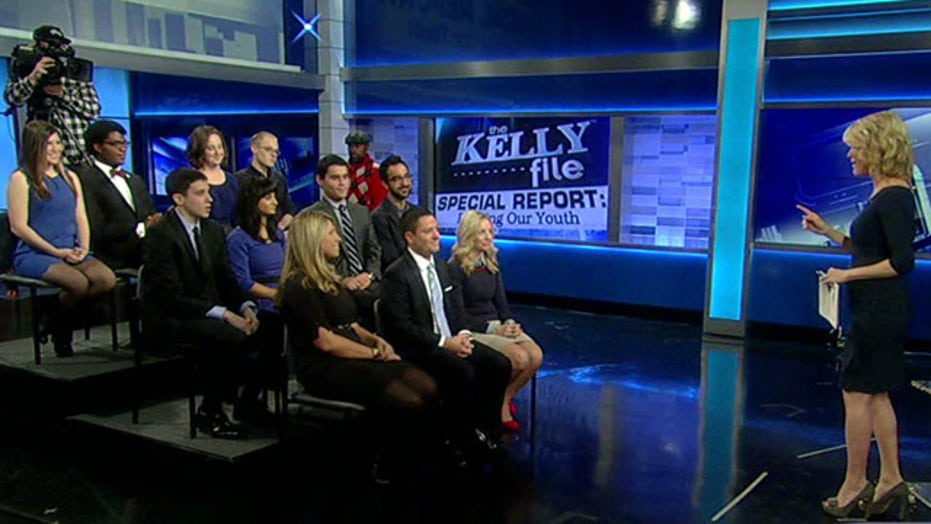 'The Kelly File': Robbing Our Youth

Millennials break down their biggest struggles

This is a rush transcript from "The Kelly File," November 29, 2013. This copy may not be in its final form and may be updated.

I'm Megyn Kelly, and this is a look at our near very future. For decades America has always been the unquestioned land of endless opportunity. Until recently. Now we are seeing what critics say is a cycle of Washington stealing from our children to pay for the next election. Our officials seem incapable of cutting spending, reigning in entitlements or making the choices that promote stronger economic growth. Let's go back to just a couple of years ago, 2008, and listen to the campaign trail promises.

SEN. JOHN MCCAIN, R-ARIZ.: I have to make sure that young people, young women and young men understand that I am dedicated to the proposition of handing off to them a safer, more prosperous world.

KELLY: Flash forward five years. And some of the students who sat through those speeches may still be looking for work.

The unemployment rate for 18 to 34-year-olds was almost 10 percent last month. And this group has lagged behind ever since the recession. It's even higher these numbers if you consider underemployment. And those who are working are making less. Wages for 25 to 34-year-olds have fallen an average of eight percent since President Obama took office. While the bills keep piling up, this group has an average $45,000 in personal debt with a lot of that typically coming from student loans. And then there is this.

KELLY: John Stossel recorded that little exercise in entitlement almost, well, four years ago. Those babies have not yet graduated first grade. And in just that time, the national debt has grown by $4.6 dollars. Those poor little things.

While the economic crash gets some of the blame, here is the ugly truth about where the money really goes. Entitlement spending this year was $1.5 trillion or just less than half of the total federal budget. By 2020, that grows to $2.4 trillion. An increase of more than 50 percent. And that does not even account for ObamaCare and what happens with our bottom-line if this experiment costs more than projected. Here is a closer look at some that.

KELLY (voice-over): If you want to hear the president pitching health care, a college campus is a safe bet. He's made no less than one dozen appearances at universities and colleges repeating his most popular promises.

OBAMA: If you are a young adult or entrepreneur striking out on your own, you are covered. If you lose your job and your health care with it, you're covered.

KELLY: This speech was days before the official launch of the now malfunctioning website. And there is a reason why he loves college campuses. That's because the success of the president's signature legislation hinges on the so-called young invincibles. The healthy 18 to 35-year-olds who don't spend a lot on health care and may not even have insurance. The administration needs nearly three million to sign up by the end of the year and even recruited Hollywood to help.

JENNIFER HUDSON, SINGER AND ACTRESS: Under the Affordable Care Act, you will stay under your parent's plan until you are 26.

KELLY: But will the campaign work? Weeks after the troubled ObamaCare launch, a Gallup poll found young people are the ones most likely to support this law. But that doesn't mean they will enroll. Under ObamaCare, these millennials are the group more likely to bear the biggest burden and reap the smallest reward. Studies show that people aged 21 to 29 who do not qualify for government help will see average premiums in the ObamaCare exchanges increase by 42 percent.

Compare that to people aged 60 to 64 who do not qualify for assistance. They will see average premiums increase by just one percent.

And the troubled healthcare.gov website isn't making things any easier. One Democratic senator went as far as to suggest that the broken website and reports of millions of Americans losing their coverage are pushing away the very people this law needs most.

SEN. BARBARA MIKULSKI, D-MD.: What I worry about is that there is such a crisis of confidence people won't enroll. And the very people we need to enroll, particularly our young people, to make this whole system work, won't happen.

KELLY: Well, some of those young people are in studio with us tonight, rying to figure out how they feel about how the economy is going and what the future holds for them. We have gathered a group of Republicans, Democrats, Libertarians, folks of all different stripes. And we wanted to get their feel for what the future holds.

Let me start with you, Hannah Biniecki, you lean right. What do you see when you hear stats like that about how the premiums are going to be for young people and how the national debt is piling up despite promises we just heard from both sides of the aisle as recently as five years ago.

HANNAH BINIECKI, 23 YEARS OLD: I think it's alarming to think that we were so easily lied to, and that my generation believes those lies and bought into those promises. And now we are really reaping the negative consequences of that. And I would like to see my generation step up and really realize what we are being told and that we would go deeper to see what those promises really meant back when they were told to us.

KELLY: And whether they were true at the time. Jeremy Epstein, you are a Democrat. And respond to Hannah's comments about lies. Do you believe that you, your generation has been lied to by the politicians?

JEREMY EPSTEIN, 21 YEARS OLD: Well, I don't know exactly about lied to. I think that's a strong word. When you look at some of the statistics you brought up earlier, it's obviously that some we were misled. I think lying is a very strong word. We were obviously misled with some of the promises that were given to us. They are not following through. So, that's obviously a problem.

KELLY: How do you feel about that though? Because, you know, I mean, when you look at college campuses, the overwhelmingly lean left. The student body leans left. And I think people had a lot of belief in President Obama that he was going to change things and that he was going be a president in particular for young people.

EPSTEIN: Well, clearly in 2008, my generation especially, we bought into President Obama. We liked his energy. We thought he was going to really change things. As you fast forward to this election, I think he won partly because I feel like you don't throw a president out who is trying to reform after his first term. You're trying to give him more time. Obviously there is something going wrong with the ObamaCare. It's struggling. It's not working. The website doesn't work. So, I think we are not headed in the right direction. I think we were misled as I said earlier and I think that's a very big problem.

KELLY: Of the Democrats on this panel, raise your hand if you feeling any buyer's remorse. None? OK. So, you still back the president you supported. Anthony Marinos, you're a liberal.

KELLY: And you support this president?

KELLY: How do you feel about how it's gone for young people?

MARINOS: I mean, it's obviously not ideal. But it hasn't been ideal for anybody. I mean, there's really -- the numbers that we were read earlier and what we have been hearing again, we were just joking and laughing about it that it's pretty heavy stuff. I don't even know where to begin with those numbers regarding the national debt and the positions that we have been put in. But it's one of those things where we kind of have to look ahead, not really look behind.

KELLY: That's what we are trying to do tonight.

KELLY: But the future doesn't look good for you. I have to tell you honestly.

The stats as we have seen so far are bad. They're bad. I mean, the national debt at $17 trillion. I feel it as a mother you guys are actually going to be living it soon. And, you know, in your careers, feeling the results of it. When you think $17 trillion. Let me ask you, Brian Morgenstern, what do you think?

BRIAN MORGENSTERN, 31 YEARS OLD: I think that it's shocking. The debt has almost tripled in a decade. We just saw the statistics about how much it's gone up just over the past four or five years. And I'm worried not just that it exists, but that but nobody seems really interested in tackling it. And the only people who even talk about it seem to be the right-wingers who didn't necessarily resonate so much with our generation. And I think some of that has to do with a logical disconnect when you get to the social issues, they talk about small government in some context, but not every context. And so, the fact that it exists and the lack of political will to address it are what really, these are the things that are alarming to me.

KELLY: And you guys are the ones who are going to be left holding the bag.